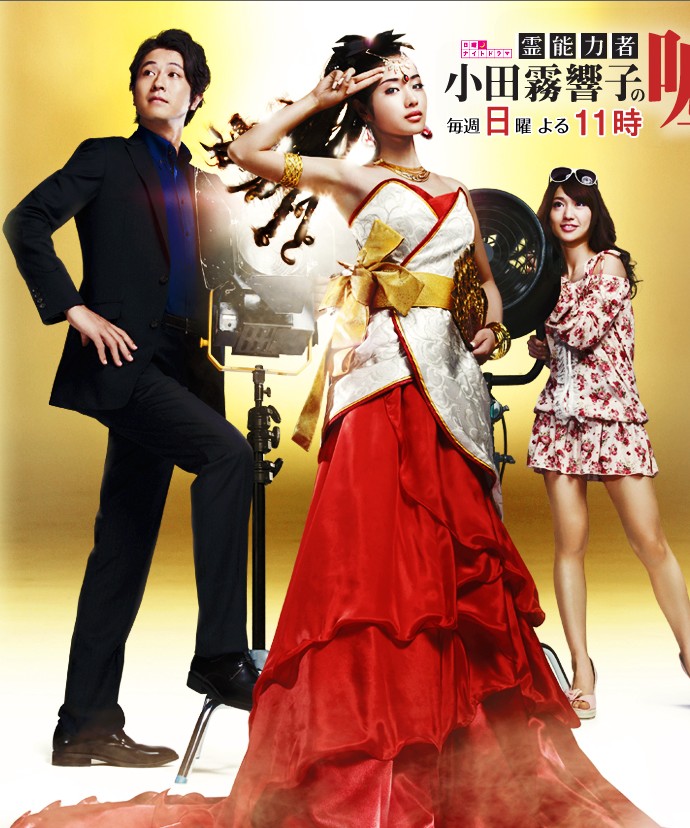 Kyoko Odagiri (Satomi Ishihara) is a beautiful and charismatic clairvoyant. She is also popular and admired by her fans. Today, Kyoko appears on a popular tv show and display her psychic abilities alongside a popular actor. Her performance goes off splendidly with the audience applauding her performance enthusiastically.

Unlike her splashy public persona Kyoko is actually an ordinary girl with a timid personality. Her public persona is actually a creation by Kyoko's cousin Kaoru Ibushi (Yuko Oshima), who is also the president of an entertainment company that represents Kyoko. Furthermore, Kyoko is forced against her will to perform by Kaoru Ibushi. Sometimes Kyoko attempts to runaway when she has to perform, but is brought back back an black suited organization hired by Kaoru Ibushi.

One day, Kyoko runs away and hides in the men's bathroom. There she meets Ichiro Taniguchi (Shosuke Tanihara). Right away she asks Ichiro Taniguchi to help her runaway, but he keeps quiet when the black suited men show up. When Kaoru gives her intimidating orders to return, Kyoko quietly goes back to work. Strangely enough, she then crosses paths with Ichiro Taniguchi wherever she works. Ichiro Taniguchi then helps Kyoko Ogagiri solve mystifying paranormal problems.

SS Jul 18 2018 10:15 pm Despite it being produced many years ago, it should not be discredited by that as it has a wonderful story to be shared. On the surface, appears to have supernatural activities but in reality there are just mysteries to be unfolded. However, what makes this interesting from the other mysteries is the way the main character use their "super natural" ability to help and heal others in obscure ways. Highly Recommend! You Will Not Regret It!

Isabelle Frater Oct 31 2014 8:14 am Reinoryokusha Odagiri Kyoko no Uso (Spiritual Teacher, Kyoko Odagiri) wasn't the drama I first thought it was going to be. I thought it would have a lot of fake psychic stuff, pretending to do magic, and would be kind of annoying. Why I really started to watch was Ishihara Satomi, who I've seen in a few things, and that dress. Oh my, that is so gorgeous, I kind of want it. What I got was a detective series, actually. The cases seem to be supernatural at first glance, but of course they're not. I was happy that it was a detective series, because I'm growing to really love Japanese detective stories. Unlike most Western ones, the difference is that most "culprits" aren't really evil, and not doing things out of malicious intentions. Their motivation is often to help someone, or to save people. Therefore when the resolution comes, it's usually done in a kind way. The mysteries themselves are interesting, but not impossible to solve. I did figure some of them out, but not all of them.

Ishihara Satomi plays the title character, Odagiri Kyoko. She is a fake psychic, but like the cases she investigates, her motivations for doing it aren't evil, or just to make a lot of money. In fact, she kind of hates it, but has to. I loved how Satomi could switch between the two personalities that she had to display. That of the young woman, and the self-assured psychic. Tanihara Shosuke plays Taniguchi Ichirou, a detective trying to find an actual psychic to recruit. She ends up helping Kyoko with her detective work, and I could also feel a spark between them, but sadly this isn't a romance drama. Oshima Yuko is Ibushi Kaoru, Kyoko's manager and cousin. I liked the character, she was kind of cute and ruthless.

Overall, an interesting variation on the detective drama. It is also touching at places, and the ending was great. Well worth watching.