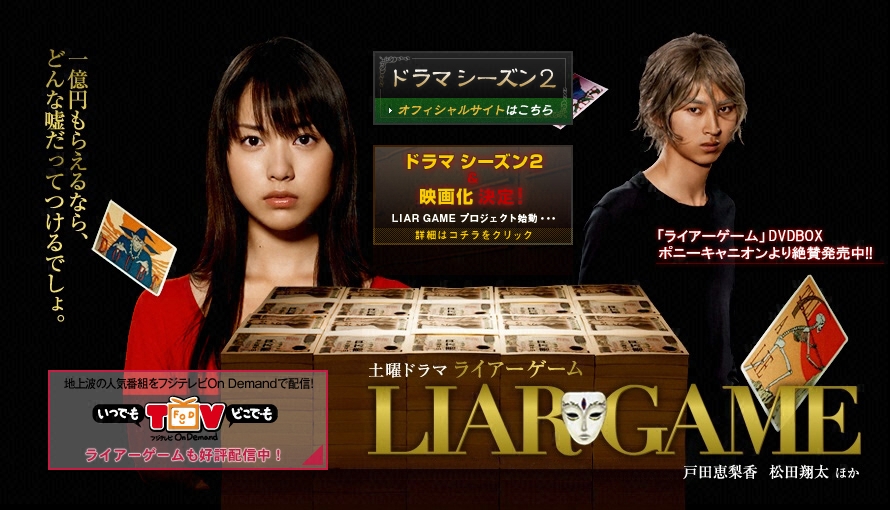 Do you think you could lie about anything for 100 million yen? That's the question you would ask yourself if you ever participate in this mysterious game called Liar Game. You have to beat your opponent; otherwise you'll be in debt. An ordinary college student, Nao Kanzaki (Erika Toda) is suddenly pulled into this crazy game where you compete how well you can lie. She's too honest to win such game, but with the aide by a genius con artist, she survives each tournament. So many lies and so many betrayals. You'd be shocked how ugly people could be when it comes to greed. But she never loses her faith in people. In this suspenseful drama, we experience the same desperation, frustration and hope that this young girl goes through as the true motive of the game is being revealed.

Kani Mar 03 2019 6:08 am My favorite Japanese drama of all time! Shota’s acting is superb & I really like chemistry between Shota & Erika. Highly recommend!!

10/10 - I just simply love everything about this drama!

Mei Nov 19 2018 2:29 am I believe only genius can understand the charm of this drama. And I am definitely a genius one.

Smartest and Funniest Drama Ever!!!

Marche Aug 08 2015 12:44 pm It's my first japanese drama, I searched for some drama to watch so I could improve my japanese. To me - it was an absolute disaster and I'll probably never watch any j drama again.

To start with - the way the characters acted - it was unbearable - they overreacted to every thing and seemed fake most of the time. The stupid faces they pulled off also didn't help. Their portaits were also too extreme and unbelievale - no one can be as stupid and gullible as the main character. Oh, and the cosplayer who appeared around 8 episode dressed as Near from Death Note also didn't help to give the show any credibility.

Even though the games appeared somehow interesting at first, I soon found myself cringing at every little thing this drama tried to show. Despite this, this show seems to be well-liked which surprises my even more.

ultramen Oct 29 2014 6:35 am the writer is no joke, i wonder how can someone be so genius.. this is the very first japanese drama that I watch and I love it 1000000%... Although I found out about the korean one first, but I find the japanese version is way way better.. THUMBS UP!!!

gk Oct 23 2014 12:33 pm I miss this drama. Japans must continue and now koreans remake this too. Koreans isnt doing well as this version. [Not sorry.] Matsuda Shota is the best!

Thumbs up!!! Apr 16 2013 12:45 pm Normally I would advise against it but if you find someone like her and insist on marrying, send me an invitation, I would love to watch from the front row...:))) As the proverb goes, there is no accounting for taste.:)) (P.S. Don't get me wrong. I loved Liar Game, though I think the 2nd one is the best.)

J Oct 26 2012 4:02 pm Does anyone know the name of the soft instrumental song that plays in the film when Nao is being kind to others?

Mado Sep 13 2012 3:51 am Watching this I couldn't help but wish her all the worst. Don't get me wrong, couse I absolutely loved the drama, but I felt she deserved all the bad things that happened to her. How can anyone be this stupid? Even as a fictional character she's hard to bear ;/ almosst turned LG off after 5 min because of her... And then Akiyama appeared and saved the day :) ... and drama of course.

By the way - Best. Drama. Soundtrack. EVER! Round of applause for Nakada Yasutaka :)

anyeeM229 Aug 15 2011 6:11 pm the plot and set up proved to me more complex than i thought. i started to be amazed at ep 4. i've seen so many detective storylines that i thought i knew the loopholes. but, of course, the actual set up went further than i thought.

sabbie Jul 06 2011 10:51 am I must agree with "lololol". There's no manipulation of luck in the story... in fact you don't need luck in winning every game. You just have to know the right strategy and to have a convincing acting skill to win. This series is by far one of the best series I've ever watched along with its second season and the movie! Plus, Akiyama (Shota) and Nao (Erika) is super duper cute together... kyaaa!!! (fangirl mode) Hence, highly recommended. (9.9/10) ;D

sumoni Jan 05 2011 1:46 am This is a friggin awesome show! I also think this is a great date drama if you have a boyfriend who likes asian shows. My b/f and I were super into it. He loved the character Akiyama and still makes references to him now and again. I liked my b/f being able to explain things that I didn't understand. It's psychological and if I daresay intellectual, so if you're looking for any romance, you'll be hard pressed to find it. Still, it keeps you guessing and the characters, even the ones that don't stick around, are all terrific. Got me interested in the manga.

lololol Dec 18 2010 4:16 am Comparing this to Death Note is hilarious. First of all, the theme and message of both the shows are totally different--Liar Game deals with human greed, while Death Note deals with just pure craziness of a man who thinks he's the new "god of the world".

Secondly, there isn't even a single detective theme in Liar Game. No police searching for a secret criminal. No super genius hunting for the most impossible. Just mean, mean games.

And last but not the least, Death Note is a friggin' supernatural, mystery, detective, fantasy anime. Liar Game is a drama. Just from that can I already conclude their difference.

And FYI, this ain't no "manipulation of luck", 'cause you gotta have a big strategy to win. Luck is just a mere 0.5%.

Great drama, btw. My eyes were glued to the screen every episode, and made me ranting for more episodes. I loved Fukunaga even though he's an antagonist hehe.

hungryharmony Jan 04 2010 2:37 am Highly recommended! I believe it to be better than deathnote because it does not have that supernatural aspect that deathnote has. Plus it's really all about manipulation of luck.