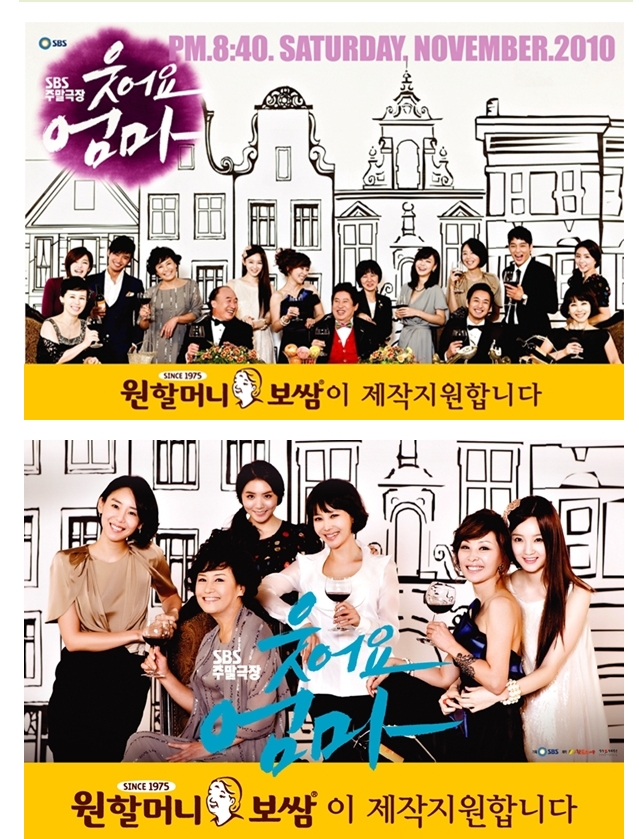 Jo Bok-Hee (Lee Mi-Sook) is the mother of three children Shin Dal-Rae (Kang Min-Kyung), Shin Meo-Roo (Lee Jae-Hwang ) and Shin So-Ra (Jung Ji-Ahn). For their own well being, Jo Bok-Hee pushes them hard to succeed. Shin Dal-Rae is a top talent and since she was a young child, she has been dragged to broadcasting companies for auditions. Because of her shy and introverted personality, Shin Dal-Rae hates to be in front of the camera, but after her mother and father fought over money, Shin Dal-Rae has just followed her mother's will. Shin Meo-Roo is Jo Bok-Hee's first son and is married to Kang Shin-Young (Yun Jung-Hee). He has a bad habit of being a womanizer. Growing up under the strong will of his mother, Shin Meo-roo has also become a bit of a mamma's boy. He is popular and thought to be kind, but he is not responsible and double-faced.

Park Soon-Ja (Park Won-Suk) is the mother of Kang Shin-Young & Kang Do-Young ((Seo Dong-Won)). Under her husband's patriarchal attitude, she raised her children and also took care of her parents-in-law and husband. Kang Shin-Young assists her husband Shin Meo-Roo, who is a politician. She even writes his draft speeches on his behalf. To promote her husband's kind image she showcases her life to the public. Older brother Kang Do-Young (Seo Dong-Won) is incompetent, troubled, and vain.

Yoon Min-Joo (Ji Su-Won) is the mother Bae Yeon-Woo (Kim Jin-Woo) and Bae Yun-Seo (Yeo Min-Joo). She was dumped by her husband and raised her two kids alone. Even as a single mother she was able to become a professor. Yoon Min-Joo is close friends with Jo Bok-Hee. Nevertheless, because Yoon Min-Joo was dumped by her husband she has gained a twisted mind. Her son Bae Yeon-Woo is the society reporter for a newspaper. His character is cynical, critical and rough. Because of his father, he hates his family and does not want to marry. Daughter Bae Yun-Seo is defiant to her mother so there's always conflict between the two. Her brother Yeon-Woo is indifferent to their mom, while Yeon-Seo tries to harass her mother.

tncdel Mar 21 2012 1:52 am I've watched over a hundred Korean TV dramas besides this one. On a scale of 1 to 10, 5 being average, this was a 2 at best. Lousy script. Mis-cast roles. The good looking guy gets stuck with a plain-Jane bawler, who cried over a hundred times during the 50 episode run. I got to the point where I found myself HATING her. The daughter of the mom who pushed her to become an actress was a little better, but not much.

Anyone who watched only this might get the wrong idea about Koreans, thinking they are cry-babies. Should have been titled "Cry, Mom" instead.