My Love By My Side (Korean Drama) 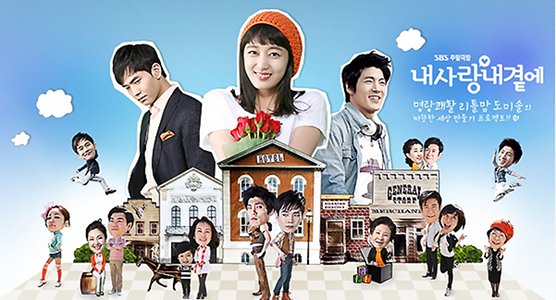 A 19-year-old high school student becomes pregnant and has the baby. She raises her baby alone and finds her own love.

19-year-old Mi-Sol (Lee So-Yeon) lives with her mother and uncle. She is senior in high school and lives her life pretty much like other high school students. Mi-Sol studies hard to enter a good university and her mom is enthusiastic over her studies. Not knowing why, Mi-Sol finds it difficult to wake up early in the morning and starts to eat a lot.

Suk-Bin (On Joo-Wan) and Mi-Sol have become friends through their mothers who know each other. Suk-Bin is an honor student, but stresses over his mother's lofty expectations for him. His family lives in the guest house on his uncle's estate and his father works for his uncle's company. His uncle's mother-in-law runs a big company. His uncle and aunt get along well, but they do not have children. His aunt has a secret. She gave birth when she was 20 years old, but her mother dumped the baby and told her that the baby was dead. The aunt overhears her mother talking on the phone and learns that her baby did not actually die. On the way home from the orphanage where she tried to find information on her baby the aunt dies in a car accident.

Meanwhile, So-Ryong (Lee Jae-Yoon) is a university student. His lives with his parents (his mom works as a high school teacher) and his troublemaker grandmother. Because of the grandmother the family is in financial difficulties. Nevertheless, So-Ryong is a positive and good person.

Mi-Sol has no idea what might be the cause of her unusual symptoms. One day she learns that one of her friends got pregnant and others gossip about. Mi-Sol realizes that she might be pregnant as well. Mi-Sol becomes paranoid and decides to take a pregnancy test. The test comes out positive. One day, Mi-Sol dresses up like an adult and goes to a clinic to have an abortion, but she feels her baby inside of her ...

saranghae May 20 2020 10:47 am cant believe this drama was so good i started this drama just out of the blue without any expectations but it turned out something that made my heart so full so happy it was so good from the start to the end the last 10 epi i did it in a row cz i just couldnt leave it alone absolutely everybody did 110% and i have no complaints i loved every and each one of them actors without exception i hated the people that should be hated cz of their bad deeds and loved the people that should be loved i wish i can watch this again to make my heart full again but i have a long waiting list that keeps bulging every day so i just dont have the time my final rating 9/10 and of course i recommended it for all family drama lovers again thanks to everybody for the good time

lrt Oct 18 2017 8:49 am The mother from hell...!!! So not boring and better than most dramas. Great cast with multiple love stories and hidden agendas. I loved it.

3211 Nov 18 2016 9:40 am jesus christ, this drama was annoying as all hell. Not necesarilly because it wasnt good, but my god, outside of four or five characters every single one of them is the scum of the earth. A drama with dozens of characters, each more annoying and infuriating than the last. You can barelly watch this show because you feel like murdering every character than comes on screen.

Morgane Jan 03 2016 7:05 pm I watched this drama years ago. A don't clearly remember the story, but I do remember to have enjoyed it a lot ! I going to watch it again.

They're the only ones I haven't seen after the KDrama