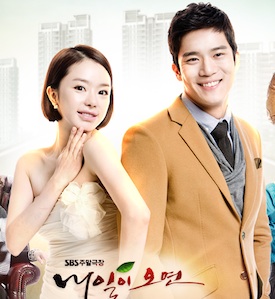 "If Tomorrow Comes" is a family drama centered around a mother and her daughter.

Yoon Eun-Chae (Seo Woo) is an only child. Her father Yoon Won-Sub (Kil Yong-Woo) owns a mid-size construction company, but his wife Son Jung-In (Ko Du-Shim) actually runs everything in the company. His wife is notorious for doing anything for the family business. Eun-Chae is a graduate student studying interior design. Unlike her mother, she is cute, confident and has a positive outlook on life. Eun-Chae dates Lee Young-Gyun (Ha Seok-Jin).

BJHYHMSJHJYM Nov 15 2017 8:35 pm Park se young also acted in MY DAUGHTER GEUM SA WOL! And Baek Jin Hee and Yoon Hyun Min are dating after starring the Korean Drama! And also Kil Yong Woo acted at the drama called MARRYING MY DAUGHTER TWICE! He acted as the chairman of the company!

Cedric Sep 25 2013 7:38 pm If Tomorrow Comes is Park Se Young's coming out party. She became famous after this KDrama. And oh yeah, ITC's ratings went higher when she made her KDrama debut midway.