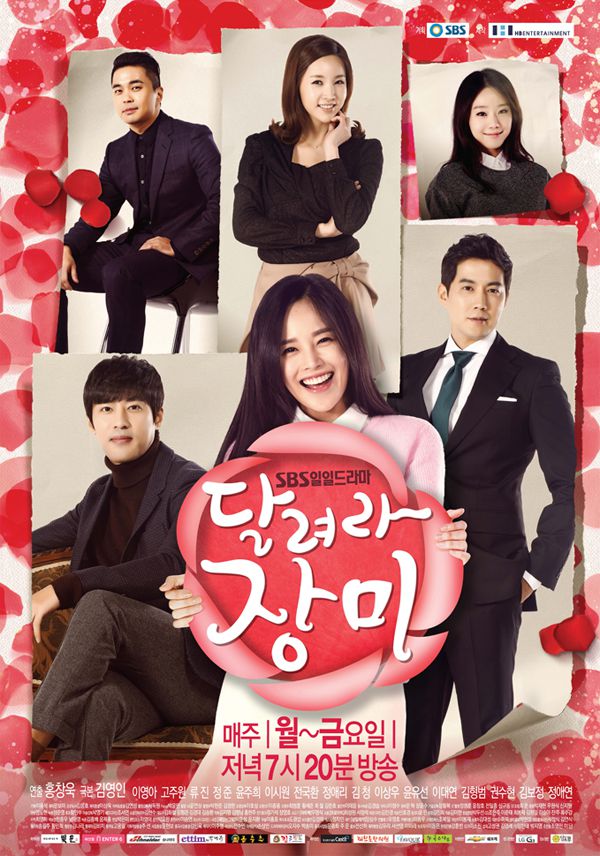 Jang-Mi (Lee Young-Ah) has a warm personality which makes her kind to everyone. She is 26-years-old and a graduate student majoring in culinary arts. Her father is wealthy, but he dies suddenly. Jang-Mi's life changes completely after her father's death.

While Jang-Mi struggles to make a living, she meets a man (Ko Joo-Won) who is the grandson of a food company president. They become involved romantically.

Jasmine Mar 08 2018 2:33 am 1 of my fave kdrama. I love the chemistry between Jang Mi & Tae Ja. The 2 actors have acted their role naturally. I've seen Go Joo Woon in You are the best, but I prefer his role as Tae Ja. I also watched Lee Young Ah in Baker King Kim TG, & I tought she is better with her long black straight hair, the Jang Mi style... I hope I could see you both again in the new drama. You are perfect as a couple...

Carol Jones Sep 07 2015 9:28 pm I love this show. It's so realistic that the characters just gets to you. Those Kangaroos members just irritate you. I have missed afew episodes and i'd like to get the DVD. Where can I obtain one? live in New York. Keep up the good work and keep the shows coming. I even got some people hooked on them.I want to learn the Korean language so that I won't have to depend on the subtitles. Again, thank you for your dramas.

Yan Sep 06 2015 8:57 pm EEK...... the Kang Min-Joo character is really despicable and low-life. The script writer has to show her in such a terrible light that its almost unthinkable and unrealistic for an educated woman to stoop so low. Really feel sorry for the actress who have to play this role!

Shairli Aug 28 2015 12:23 pm Jang Mi & Tae Hee..... seriously, their characters are so stupid! At eps 45 & both are becoming more stupid. As the title character, Jang Mi should be developed to be more wiser, brilliant & strong. Having boyfriend but still acting dumb! So irritating that I feel like slapping her left & right. Agreed with one of the reviews, wasting time with dragging plot-scenes & wasting my time! Forward mode... straight to finale.

Kiew Aug 25 2015 9:03 pm Not again! Another one of those dramas that drag on and on about mismatch of socioeconomic status between prospective in-laws! Although this culture does exist in many Asian societies, there is no need to play up this kind of attitude or value, in case we perpetuate this among our younger generations! Anyway, the drama shows too many petty and jealous acts of females who couldn't get their dream man, think Min Joo and her horrible mother! Too repetitive! A real waste of time! Its like glorifying their terrible behaviours against other human beings! Too many episodes, each leaving one with an uncomfortable feeling after watching it. Better to have more episodes for the better ones with good storyline like Dr Gang, The Family is Coming and the Billionaire.

milly Aug 07 2015 1:49 am baek jang mi so stupid bcoz dont know how to revenge min cheol family..why her dont tell tae ja abt min cheol famly did to her..she's got stupid role in this drama.. i hate her so much..

Nora Jul 28 2015 12:14 pm Really can't stand Lee Young Ah's acting. I don't understand why she must be chosen when there are so many other beautiful and versatile actresses who can obviously take that 'Jang Mi's' role and act naturally.

mj Jul 21 2015 7:51 pm Still, one of the better daily drama but now Jung Mi is getting on my nerves! WHY PRESS CHARGES AND MAKE IT BAD FOR THE COMPANY AND THEN ASK FOR LENIENCE!

mj May 07 2015 10:18 am Out of all the daily drama, this one is surprising good! Story line is believable so far, and acting is pretty good!

strawberry21 Jan 18 2015 10:20 am this drama looks good and love and compassionate and about to watch it and won't let me down but its long so gottah have patience and be cool sit back and enjoy all of you thanks for reading.