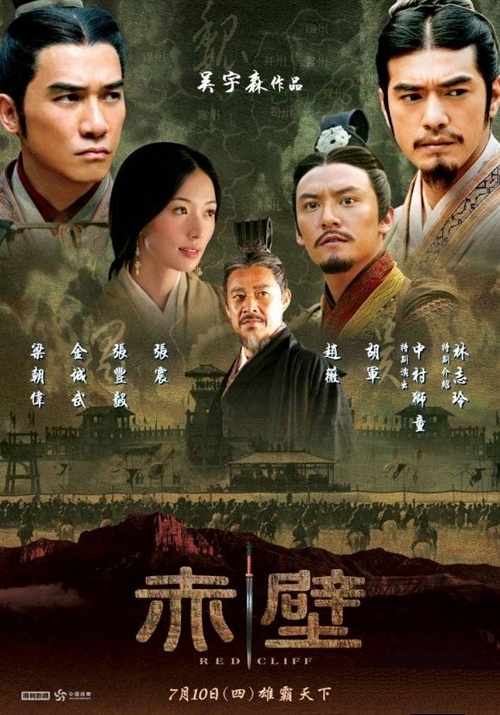 It's A.D. 208 China. Rival states Shu and Wu join hands against their common enemy, the evil and ambitious General Cao Cao of the Wei kingdom, but are seriously outnumbered by his million-strong army. But with the charismatic leadership of Gen. Zhou Yu (Tony Leung), the perfect strategy of scholar Zhuge Liang (Takeshi Kaneshiro), and the support of emperor Sun Quan (Chang Chen), they manage to declare a small victory. While Cao Cao scoffs at this as no big deal, it adds fuel to his fury.

kira Aug 05 2012 7:20 am this movie is one of the Chinese movies i've watched !!!Daebak!!..two thumbs up!!!TAkeshi Kaneshiro doesn't get old since i saw him in the Jap drama God, Please Give Me More Time ,he's still good as ever..and Zhao Wei's still lovable as always..

Ki Feb 11 2009 5:04 am There’s big epics and there’s biiigggg epics. “Red Cliff” would certainly fall in the latter. For those unfamiliar with the movie’s background, “Red Cliff” marks the return of John Woo to Asian Cinema after spending nearly 10 years in Hollywood. Distinguishing “Red Cliff” even further is its collection of A-list actors; Tony Leung, Takeshi Kaneshiro, Chen Chang, Vicky Zhao, Jun Hu, & Shido Nakamura. Making things even more newsworthy is the fact the movie carries the tag of “most expensive Asian movie ever made.” “Red Cliff” sports an estimated budget of $80 million dollars.

The film also has had its shares of memorable pre-production moments. First, Tony Leung backs out of the movie, then Yun-Fat Chow backs out, then Tony Leung comes back on board. During the actual filming stage of “Red Cliff” tragedy struck the set when a stunt men died and 6 others were seriously injured after two ships collided.

By now you can tell “Red Cliff” is adverse to traveling the normal route and this even includes the film’s distribution. In most parts of Asia, “Red Cliff” saw its release on July 10th, 2008, with a runtime of 146 minutes - South Korea being the exception as it showed a shortened 132 minute version. Then sometime in January, 2009 “Red Cliff 2″ is expected to be released. Meanwhile the folks outside of Asia gets a single 150 minute version of “Red Cliff.” The reasoning? Westerners are not as familiar with the story of “the Battle of Red Cliff,” so an abridged version should fare better, while Asians are thought to know this story intimately and a more detailed version should fare better. In theory anyway.

And after all of this, there’s also the actual movie itself.

In John Woo’s “Red Cliff” the setting is China circa 208 AD, near the end of the Han Dynasty. General Cao Cao and his 800,000 strong army in northern China look to expand their power. The smaller states of Shu and Wu in southern China find themselves in a precarious state. Strategist & scholar Zhuge Liang (Takeshi Kaneshiro) from the Shu state reaches out to Wu leader Sun Quan (Chen Chang). Zhuge Liang proposes that the Shu and Wu form an alliance against the much larger General Cao Cao’s army. Sun Quan realizing that this is his best option agrees to Liang’s proposal. The alliance, under the military leadership of Gen. Zhou Yu (Tony Leung), then prepares to make its stand on the strategically important Yangtze River at Red Cliff

At least in the Asian version of John Woo’s “Red Cliff,” there’s a mixture of the good and the bad. With expectation so high and the need to satisfy so many different constituencies it’s not surprising that the movie underwhelms. Visuals look impressive but doesn’t have the wow factor like Yimou Zhang’s “Curse of the Gold Dragon.” Story wise, maybe it’s from a bad habit picked up from John Woo’s Hollywood days or maybe its just from the film’s desire to appeal to a broad audience range, but the story carries a noticeable dumbed down tone. There’s plenty of awkward feel good moments placed into the movie making you wonder if the film is indeed based on “the Battle of Red Cliff” or just another family fantasy pic like “The Lord of the Rings” or “Harry Potter.”

The battle scenes shown in “Red Cliff,” like the rest of the film, are a mixed bag of good and bad. The scenes look good in general (and it should with that kind of budget), but stopped well short of memorable. Also, it doesn’t help that the film resorts to elements of fantasy in its battle scenes. Often, one man would fight hand-to-hand combats against dozens of other men and come out as the victor (one time even fighting one handed while cradling a baby in his other hand).

What “Red Cliff” did well was to build anticipation for its upcoming second half part. Once that clunky background is finally laid out and the film actually focuses on “the Battle of Red Cliff,” well things get more interesting. The initial skirmish at Red Cliff wets your appetite, while the decisive battle is like the movie itself … “To Be Continued.”

Pedja Nov 21 2008 7:33 am I watched this, and I'm very impressed. Action sequences are great, acting is great, it was refreshing to see a movie that actually tells a story, rather than just showing pretty pictures, which is common for Hollywood-made movies i.e all form, no substance. I can't wait for Part 2, this movie is brilliant, and it establishes Asian cinema once again as superior to Hollywood, and it's proof that you *can* make a movie that's awesome visually and tells a story and have characters that you can relate to.