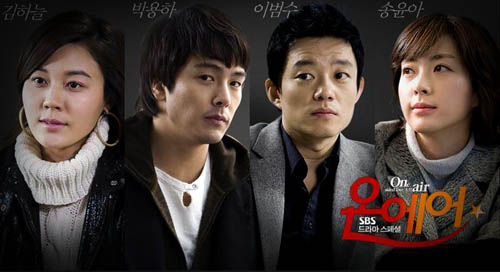 Top actress Oh Seung-ah (Kim Ha-Neul) refuses to accept the Best Actress award at an awards ceremony after finding out that she is to share the prize with another actress. In the process, she makes a fool out of Seo Young-eun(Song Yoon-A) who was there to hand out the award. Seo Young-eun is an extremely popular writer who has written corny dramas that have gained top ratings. But now she feels a need to change. She wants to write a drama series with depth. So she chooses to write about a drama that centers around a mental hospital. To get ideas for her script, she visits a mental institution only to run into Lee Gyeong-min(Park Yong-Ha). Gyeong-min is conscious about the strange woman who keeps looking at him. He may look like someone from a well-to-do family but only the opposite is true. His family is very poor, and he’s the only breadwinner in his family. He had come to the hospital to borrow some money from his friend. During a meeting with the production team, Young-eun’s proposal for a drama based on a mental hospital setting is dismissed. Young-eun is about to go crazy because of the head of the drama department keeps insisting that she write a romance piece about a girl in love with a rich man, only to catch a chronic illness. Moreover, the writer is seethed with anger after finding out that the main lead will be played by Oh Seung-ah. Seung-ah feels that she’s unable to grow as a serious actress because the CEO of her management company is corrupt and too greedy. The one thing she’s been thinking about is to sign a contract with a different company once her current contract comes to an end. So she seeks out Jang Gi-jun (Lee Beom-Soo) who remembers Seung-ah. It was Gi-jun who had helped Seung-ah avoid a fraudulent scheme seven years ago when she was in her senior year in high school. Gi-jun company is on the verge of going under when Seung-ah decides to join his team. Seung-ah is intent on becoming a serious actress. Young-eun meets up with Seung-ah with a new proposal for a script. Young-eun criticizes Seung-ah for being a terrible actress. On the other hand, Young-eun is also criticized for having axed the director. Young-eun bumps into the young director, Gyeong-min, for the first time after seeing each other at the mental hospital, creating an awkward moment. They agree to work on a drama series together. And Seung-ah is to join them!

Juliana Nara Dec 26 2022 4:20 pm Good afternoon! Could you indicate the website for me to watch On Air please?

Diddi May 07 2017 10:28 pm Watching this drama again after almost a decade.... This is the first drama that made me falling in love with Korean TV shows. This time I watched mostly for the substance, its beautiful dialogues, stuff that I have forgotten. In short, it is a mixed feeling, giving me happy memory but also goosebumps knowing that Park Young-ha has left us forever... May he rest in peace.

avs May 05 2014 6:46 am i love this drama,, its make me inspired to that such kind of drama someday,, i am studying all sequence and every twist of the drama.. the oh seung ah and lee quing min is one of the very lovable scenes that makes the story more twist and mysterious,, love this korean drama i am so proud to the writer kim Eun Sook and the director

6th Sep 03 2011 1:31 am Really hated the shouting and camera close ups [Lee Kyung-Min] and over-acting??/childishness [Seo Young-Eun]. I Watched this drama to see Lee Beom-Soo and Kim Ha Neul and skipped the Lee Kyung-Min/Seo Young-Eun "love"scenes - yukk. Story wasnt that great and ending was a little odd, some issue were not 'clearly' explained, or maybe i didnt get it.

Yuja Aug 14 2011 7:25 pm An amazing drama!!! Definitely teaches what happens behind the scenes from the beginning to the end in making a drama & all the hardships and fun times it comes with it :D Definitely a drama I would recommend to any Korean drama lovers :D <3