The Lady Shogun and Her Men 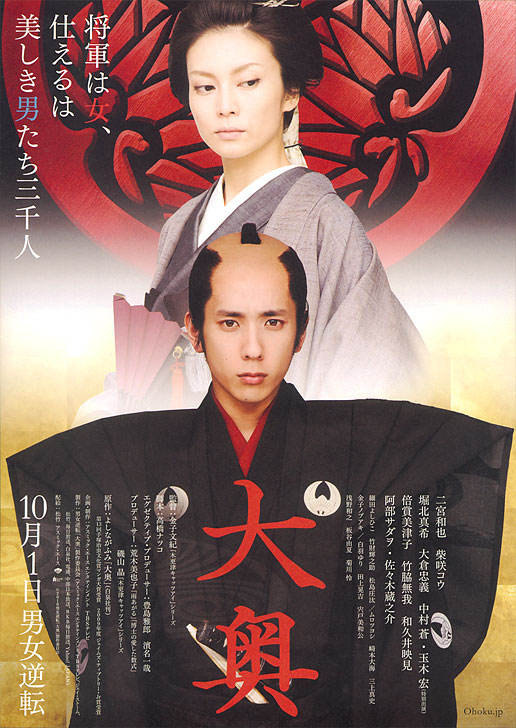 In the year 1716 a mysterious epidemic stickens men in the country of Japan, dropping the population of men to 1/4th of its prior state. With the drastic reduction of men, the gender roles have become reversed in Japan. Woman become the dominant members of society and males are sought out for the ability to produce children.

A young man named Unoshin Mizuno (Kazunari Ninomiya) hopes to marry childhood sweetheart Onobu (Maki Horikita), but due to class differences realizes this is almost impossible. To raise his social status and also save his poor family, Unoshin Mizuno enters the Ohoku (inner chambers of the Shugun's castle) and attempts to vie among 3,000 other men for the affection of the female shogun. What Unoshin Mizuno quickly learns about the Ohoku is that the men there are all beautiful, but highly ambitious and conniving. In this environment, the 7th shogun Tokugawa passes away and the new shogun Yoshimune Tokugawa (Kou Shibasaki) takes the thrown and enters the Ohoku ... 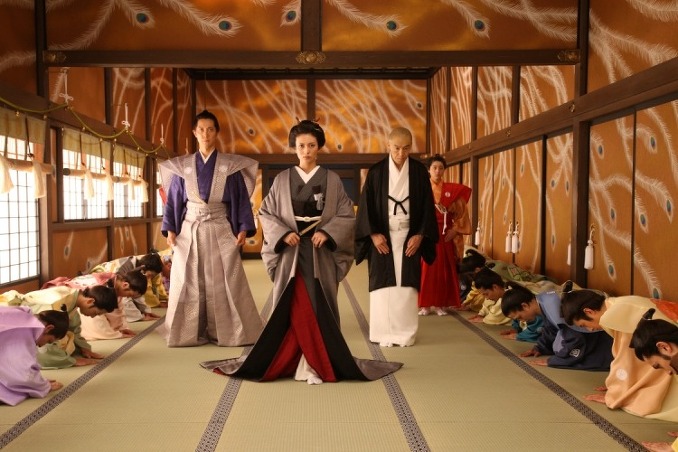 someguy Jun 12 2016 10:25 pm @JJP 1. how da f can you not like NINO? 2. NINO also has won numerous acting awards, and so has other actors/actress, if the acting is bad, blame the director, but,. uh,. the director is THE director who has directed several award-winning tv/movies..! 3. it's literally impossible to cast only "beautiful" men, since not every actor has your "beauty" standards, just pretend they're beautiful..

OVERALL - just watch this movie, respect them who have made this awesome movie

JJP Jul 14 2015 7:44 pm So I'm finally watching this movie after 5 years. It took me time because there are 3 actors I really don't like in this and one is the lead. But I still liked the story since I then watched the TV serie and the 2nd movie too out of curiosity. My only complaints are: 1) the acting, it was painful ; 2) the men in the Ohoku are supposedly beautiful (some synopsis even say "the most beautiful") but I found the actors really unattractive here, even for a period movie.

i love Japan Jan 30 2013 11:53 pm I was able to watch this on board JAL flight yesterday. Awesome movie! Extra-ordinary story, unpredictable twists, and superb acting of the casts!

faura Sep 06 2012 2:30 pm Kazunari Ninomiya was the guy who played Saigo in Clint Eastwood's 'Letters from Iwo JIma' right? I liked his performance in that Hollywood film but find his acting here in Ooku a bit lacking in comparison...

jenny Oct 25 2011 12:34 am This was a very entertaining movie. However, I am not used to so much homosexuality so I was a bit surprised but even taking that into account, it was a beautiful movie and I am glad the ending is a good one. Surprisingly, it was also funny; definitely recommend this movie.

anyeeM229 Sep 04 2011 3:25 pm funny and VERY interesting. tamaki's picture shouldn't be in the second row. his character should be 3rd in line! great casting for every character.

Riisa Aug 28 2011 6:54 pm I think Ninomiya and Maki would've made a cute couple. They both er..look very young. And I wouldn't mind the Tamaki-Ohkura love because they're both hotties. xD

ChaoSpiral Oct 05 2010 1:25 am Saw it last night here in Nara. Horikita Maki was pretty but unconvincing. Ninomiya was trying hard but I didn't buy him as the character. On the other hand, Shibasaki Kou was fantastic. So was Abe Sadao. There's some nice kendo in a couple of scenes, but otherwise not much action. The ninja was a nice touch. The costumes were amazing.