My Husband Got a Family (You Who Rolled In Unexpectedly) 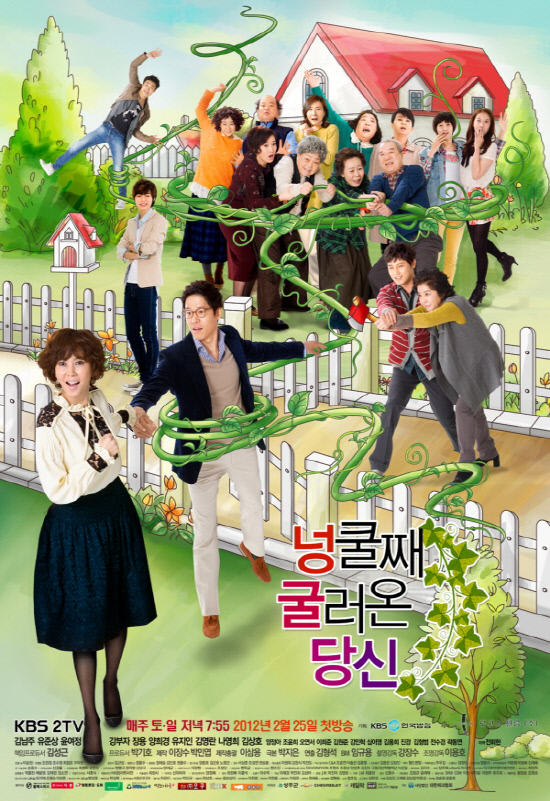 "My Husband Got a Family" tells the story of TV drama director Hong Yoon-Hee and surgeon Bang Gwi-Nam after they get married ...

Yoon-Hee (Kim Nam-Joo) is a TV drama director. She recently married the perfect man for her. Yoon-Hee has been afraid of having in-laws, specifically a mother-in-law. Because of this, Yoon-Hee looked for a guy who isn't closely connected to his family. If she couldn't find such a guy, Yoon-Hee planned on staying single. Finally, Yoon-Hee met Terry (Yu Jun-Sang). Terry is a doctor with a sweet personality, but, most importantly, he has adopted parents from America. Terry has no recollections of his real parents and was adopted by the Korean couple in America as a young child. Yoon-Hee's marriage life seems all set.

Meanwhile, Chung-Ae (Youn Yuh-Jung) has lived with heavy guilt ever since she lost her son Gwi-Nam at a traditional market 30 years ago. Because of that traumatic incident, Chung-Ae has suffered abuse from her mother-in-law. Nevertheless, Chung-Ae still hasn't given up hope on finding her son one day.

Then one day, Yoon-Hee gets a phone call from her landlord. Her landlord asks for an additional 100 million won to extend her lease. Yoon-Hee goes to her mom's house and asks her mother for the money that she and her husband deposited, but Yoon-Hee's mother invested all of their money in her son's business. Yoon-Hee can't extend her lease and must now move out. Yoon-Hee and Terry look for a new place and they are introduced to a house located on the second floor of a building. The building is owned by Chung-Ae and her husband. Yoon-Hee will soon experience the biggest crisis in her life ...

Binibining Guro Jul 20 2021 2:06 am You know that it's a great drama if you won't mind it having 58 episodes. I never felt that this drama is that long. I enjoy every episode. It's funny and there are a lot of lessons to learn. And I just want to emphasize this, This Drama Is So Funny!

angelight Sep 21 2020 1:41 pm I saw My husband got a family on a Chinese channel around 2013. I remember the tears I shed the whole heartedly laugh I had. The romantic feeling, the love for a family that wasn't mine. I loved every episode and especially the sweetest ending a drama could ever have.

I loved each and every actor in this drama from the biggest one to the smallest one. Quality and honor went hand in hand in this drama that will live in my heart 'till the ends of times.

I hope many have the honor and pleasure to enjoy such great family oriented drama. No one has far matched this one for me. Loved It<Love It always and forever.

Marina purba May 13 2019 1:06 pm Hello i'm from indonesian. I love this drama so much.very beautiful drama. And i like yang jung ah and kim nam joo so much Actually,i watch this drama because them..

cathycath Jun 05 2018 7:40 am I just finished watching this drama last night. I love this family show so much! I'm gonna miss them!!!! I came for Kim Nam Joo and wow her transformation from Cha Yoon Hee to Go Hye Ran (Misty) wow, it's a mind blowing experience! this woman is oozing with talent and beauty. She was talent and beauty herself. I love this family drama! It's so funny and will make you cry at the same time. it warms my heart. love this! a classic one. 10/10

pchogz Mar 17 2018 1:08 pm This is one of the best family dramas I've watched. Would definitely recommend it

Pammo Feb 26 2018 2:42 pm I marathoned this after watching the first 5 episodes of a 2018 drama Misty. The actress was so captivating and talented I researched her work and found this drama. What a treasure trove. Since I started watching K dramas as an addict in 2014 I missed a lot of earlier dramas (other than historical ones). This drama has an all-star cast, superior acting, and almost each and every one of the actors have gone on to bigger and better roles highlighting their talents. I wish this would be released in some of the venues that are premium pay ones so that everyone can see this drama -- definitely a top 10 family drama - so many principles of life and definitely a top "in-law" portrayal drama.

lrt Aug 17 2017 8:01 am I am doing a 180 on changing my feelings toward this drama. Sometimes you need to get past a few episodes to relate to a story. I started from the beginning again and this time could not stop watching. It is a tender sweet drama and every story line becomes meaningful. The lead actress really rocks and I wish she had more recent work to look forward to. Great chemistry all over the place and even the characters you thought you wouldn't be drawn to pull you in. 10 out of 10

Choco Apr 23 2017 1:46 am I watch this for Jo Yoon Hee The main couple story is fun to watch but I skipped the personal story of Bang Gwi Nam... I also skipped all the scene of Bang Il Sook love story and play when Bang Yi Sook-Chun Jae Young and Bang Mal Sook-Cha Se Gwang story.. They're so lovely <3

PT Jun 26 2016 3:32 pm i got to say this..the main lead is so pathetic. i hate that ajhumma. the lead guy is ok in acting. but the character is really annoying. he always supports his wife. poor his mother. left behind.

the only thing that kept me going was mal-sook and se-gwang love story. so cute.

yi-suk and jae-youn story also good... these ttwo couples are the only saving grace for this drama along with the family. i skipped all scenes related to main lead ccouple and watched the drama till end

#fanofahjussi Dec 11 2015 10:00 am This drama is not really "makjjang" so I love it so much, the main story is beautiful, even though the bickering sometimes give you a headache... And Yu Junsang :" He's handsome~~ haha

jasmine Feb 03 2015 10:22 pm one of my fave K-drama. every role has unique story. I love the story between yi sook and her careless boss jae yong, they both got the best chemistry. jang goon is very funny, handsome but an idiot? lol... jjinja jjinjja joahae! this February 2015 KBS broadcasted the encore, gonna watch it every single eps. Merdekaaaaaaa!!!

ng. Jan 30 2012 1:25 pm Kim Nam Joo is a wonderful actress. I have enjoyed all her dramas. I get the impression that they are more for the slightly older audience, but I still like them. Queen of reversals was amazing! Kim Nam Joo, hwaiting!!!!!!!