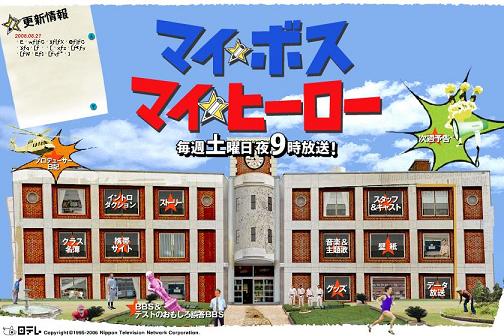 The show is about Makio Sakaki (榊 真喜男), also known as "Tornado", a 27-year-old yakuza, who wants to succeed his father at the head of the gang. But Makio is a little dumb, so his father decides to send him back to high school and makes a deal with him: if he can graduate he can become the new leader of the gang. If Makio doesn't graduate, the position of boss will be given to his younger brother, Mikio. And that is how the hero goes back to school, hiding his identity and age.

WryTomo Jul 26 2019 5:46 am Finishing my boss my hero in just one day!! I got so into the drama.. I search for the actors.. And discover that Sorafune sang by Tokio and the voice is from nagase=sakaki makio.. Instantly became a fan ^^

danzstillalive Mar 09 2015 4:02 am A very good dorama to watch. Funny, hillarious, but also touching at same point. I really hope there's a new season or a special episode or a movie from this one.

ravenralph99 Mar 03 2015 12:16 am I wish there would be a season two just to wonder if makky and hikari would be together since they have agreed on a date. Even it's very funny it teaches us some values in life.

Rizuka Feb 08 2015 12:01 am this is the best drama ever. very funny, interisting.. CRAZYY i like this totally hahahaa