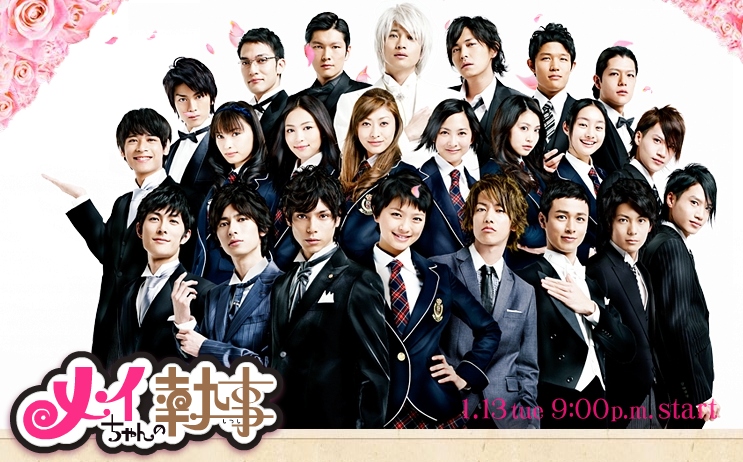 One day Mei (Nana Eikura) loses her parents because of an accident. Her rich grandfather (that she doesn't know about) of the Hongo Family appears in her life with a butler named, Shitbata-Rihito (Hiro Mizushima). Even knowing she's rich she detests going with Rihito to a school for Heiress to inherit her grandfather's riches. However, not only does she not want to be a heiress to the Hongo Family, it's impossible to say no because her life and her friends depends on it after her parent's noodle house was blown away by her enemies leaving her homeless. To protect her friends, she decides to attend to a school for rich heiress. However, the place she has to go doesn't accept her because they feel that she doesn't belong there. Using all the method they have to have her kicked out, Mei decides to leave the school and go back to her home, only she doesn't have a home.

When she reaches home, her grandfather calls her up and threatens her that he's going to take is son's body back with him. With all the plead in the world, Mei wants both her father and mother's bodies in one burial her grandfather threatens to Mei, that if she is able to go to the school and become the Hongo Family's heiress he will bury both her mom and dad into one burial, but it's only if she can prove to her grandfather that she's worthy of being a bloodline of Hongo then her wish will be his command.

With the help of Rihito, Mei decides to have a reason to become a heiress. But as the time goes on and problems build up between other heiresses including one she doesn't know about, "Lucia" aka Hongo Shiori (Yu Yamada) also wants to be the heiress for the Hongo family. Shiori, is a beautiful young lady that people called worthy of being called Lucia (name for the lady who is true, beautiful, smart, etc.) Mei's life was almost stable with the girls at school, however, there are problems that keeps aiming for Mei to be kicked out of school. However, with her first rank butler Rihito helping all the way, she doesn't worry but the one thing that worries him are the threats to kill and kick Mei out of school and the Hongo Family. With problems coming up and Mei and Rihito getting along. Rihito's younger brother, also Mei's friend, Shitbata Kento (Takeru Satoh) joins his brother as a butler. Though Rihito and Mei are getting along well, butlers and heiress are forbidden to fall in love, but will this forbidden love be broken and will Kento allow the person he love go to his brother? Will Lucia give up Rihito and the position of a heiress? How will Mei decide her path?

Zrack Nov 14 2020 3:16 pm This is the first Japanese drama that I’ve watched and is really interesting and have a very high potential to become a great show but there is no continuation to the series is what makes this show to drop. The plot is very exciting , I would definitely recommend it to my friends and family . Sorry for the late views . 2020 is really something.

honey Apr 26 2017 12:38 am I love Takeru Sato But Hiro is really handsome in this series Very Very Handsome Love You tooooo

Mei May 28 2015 2:13 am I really love this drama so much, this is the 1st drama i saw that very interesting for me & watched it without missed any episodes. I hope Mei's butler would have a sequel. Really miss them so much. Nana & Hiro is the best couple here :')

Umi Jun 10 2013 5:14 am This drama was good the actor and actress were acting well and i love mei.she is kawaii good acting remind me of nodame-chan

rihito lovers May 06 2011 12:14 am i love rihito soooooo much.every movements of rihito makes my heart exploding.....this drama is the best among the best.i never feel like this before.the kiss scene in the last episode tells us everything about his feelings for mei.i love rihito especially his smile.soooooo sweet.love you rihito.i wanna meet him so much!

sumoni Jan 05 2011 2:32 am This was a good drama. I enjoyed the variety in the cast and the different issues they had going on. All the trials were hilarious and the actors and actresses good. I didn't connect with Mei right away. She seemed to act a little childish at first, but she gets along with her butler eventually. I suppose I wish I had such a luxury, haha. Other than that I had no problems with the show. I liked it from beginning until the end.

Alison Nov 13 2010 11:53 pm They should have a sequel. Loved rihito. He looked better here than in Hana kimi. And the series was quite ok. No offense but I agree with my friends, they should have gotten someone else to be the role of mei

ImaniRine Dec 25 2009 11:41 pm Oh, I love this drama! Hiro is the perfect Japanese butler, because I will have one in every country if I was a heiress.*Sigh* Perfect ending by the way. I'm glad they put in the kissing scene, it made the drama all the better. I still cheese everytime I think about Hiro smiling and looking at Mei after that fight with his brother. Oh!