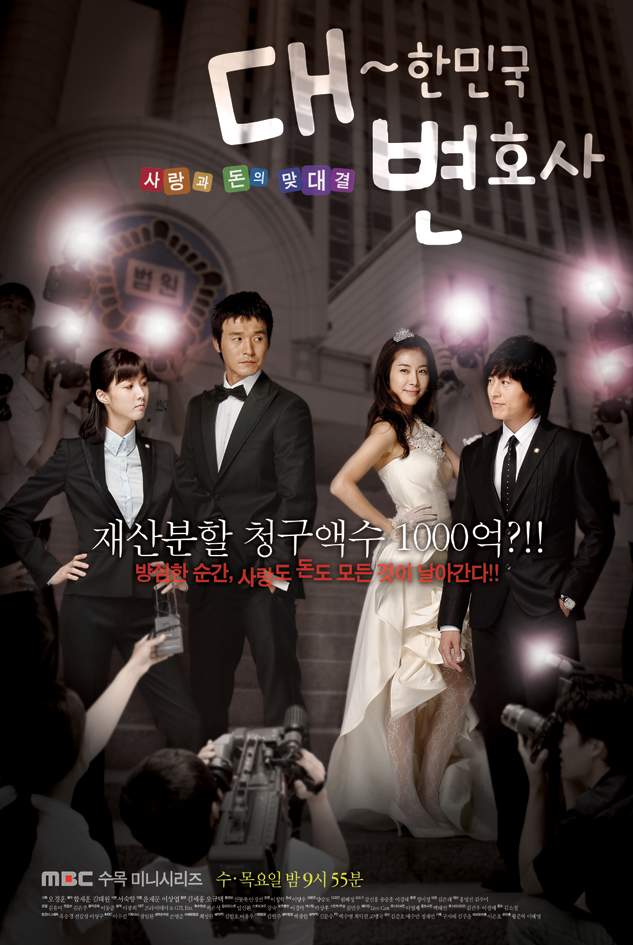 Woo Lee-kyung worked at a major law firm as a secretary when she fell head-over-heels in love with Byun-hyuk, a rising star attorney in the firm. They fell madly in love with each other and ended up living together for three years. However, one day, Byun-hyuk decided to leave her, and all she had left were his law school books. The despaired Lee-kyung studied day and night with Byun-hyuk’s books, and soon passed the bar exam herself. Lee-kyung ends up opening her own tiny office with no employees. Her first task is to represent Han Min-kook, who winds up in a huge divorce lawsuit that could cost him an incredible sum of $100 million dollars. This case also lands Lee-kyung in a funny, cute tale of romance. Meanwhile, the story takes an odd twist when it is discovered that Han Min-kook’s ex-wife, Lee Ae-ri, is Lee-kyung’s good friend, and the lawyer representing Ae-ri is none other than Byun-hyuk himself. At the end of the day, Lee-kyung is left with the challenge of facing a showdown with her friend, Ae-ri, as well as her first love, Byun-hyuk.

Harry Jul 24 2015 12:15 pm This is a really nice kdrama. The leads had excellent chemistry.Good performance by all the actors.

The 50 second elevator scene was really awesome! Like said in a review earlier, the 16 episode ending was good but not sufficient, they should have completed it with after the 2 years scenario. That would have been a even better ending.

It has a good rewatch capability too. Many scenes are a good to watch again and again.

주영옥 Dec 21 2013 11:37 pm I love the character 한민국,  이성재 played. Too bad it's not a real person but I did come across someone very close to.  The drama was excellently executed, there were no dull moments and kept me entertained, throughout.

I have seen, 8-9 movies of 이성재 and this 대한민국 변호사 drama director brought out the best of 이성재's talents.

I loved the character 오류동,  성동일 played, too. I could not contained myself when I first saw the drama. He is hilarious just being there doing nothing.

This is the first drama, I have seen it over and over. Still,  I could see it again.

Great job to all!

Ronaldo Nov 29 2013 10:16 am I can't believe that it would be the 16 episode is the last episode and i'm thinking that they will show at least photos after 2 years. Anyway, It's a a good romantic comedy show. And even though I don't know much of the casts still I can say, job well done....they made me sad,worry,laugh, smile and confuse sometimes