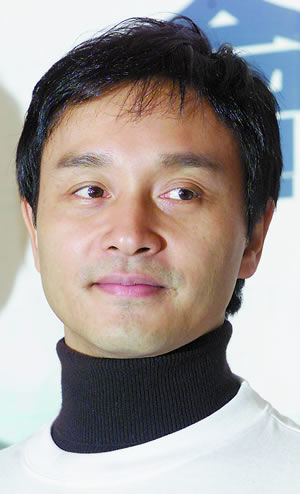 The late Leslie Cheung (Cheung Kwok Wing) was born in Hong Kong in 1956 and educated in England. He entered Hong Kong show business as a singer in 1980. After joining a training course for actors at a TV station he began acting in TV dramas and films; his appearance as a mother-fixated golden boy in Patrick Tam’s NOMAD (1982) established him as a serious actor and marked the start of a decade of super-stardom in which he shuttled between hit albums, stadium-sized concerts and films. Three film roles in particular brought him to international attention: as a cop in John Woo’s A BETTER TOMORROW (1986), as a 1930s opium addict in Stanley Kwan’s ROUGE (1986) and as a 1960s playboy who seduces and abandons a string of women in Wong Kar Wai’s DAYS OF BEING WILD (1990). In the early 1990s he announced his formal retirement as a singer and moved for a while to Vancouver. But he took on ever more ambitious roles in such films as Chen Kaige’s FAREWELL MY CONCUBINE (1993), Wong Kar Wai’s ASHES OF TIME (1994), Chen Kaige’s TEMPTRESS MOON (1996) and Wong Kar Wai’s HAPPY TOGETHER (1997).

On April 1, 2003, Leslie Cheung committed suicide, by jumping to his death from the 24th floor of the Mandrain Oriental Hotel in Hong Kong. He left behind a suicide note, noting his struggle with clinical depression.

Cheung was noted as one of the few Asian male stars to play openly gay characters (he was bi-sexual himself).