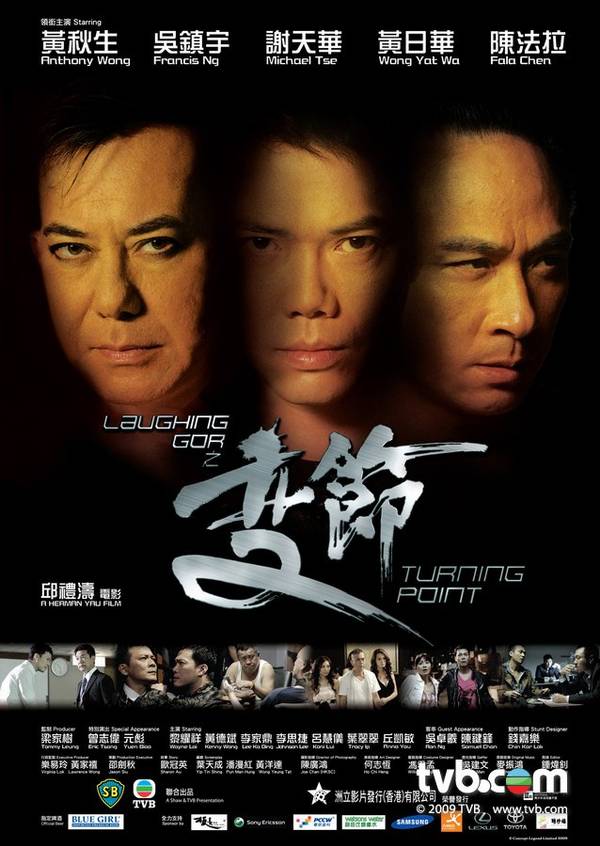 Laughing (Michael Tse Tin Wah) is supposedly an undercover police officer who has infiltrated a triad organization. However, before he became a police officer, Laughing was a member of the triads and worked for the big boss man No. 1 (Anthony Wong). No. 1 was very good to Laughing, and Laughing looked up to No. 1 as his elder brother. In order to strengthen his business and illegal activities, No. 1 arranges for Laughing to join the Police Force and become his mole to gather information about the plans and counter-plans for operations by the police.

Laughing graduated from Police Academy with outstanding results but before he was assigned to a post as a police officer, his "bad boy" image attracted the attention of the Head of District Anti-Triad Squad, Superintendent Sin (Yuen Biao) who arranges his assignment as an undercover cop to infiltrate the mob syndicate.

Laughing is now a "double" mole. No. 1 was happy with this turn of events as Laughing was assigned to infiltrate the mob of his triad rival sibling (Francis Ng). To further complicate the situation, Laughing falls in love with Francis's sister, Karen (Fala Chen).

How will Laughing contend with the law, the triad brotherhood, and his love affair? No matter which camp he sides with, he is doomed to be a traitor to the other. Which path will Laughing ultimately choose to follow?

Barry Dec 29 2012 6:13 pm Shopping online is also a very comfortable experience as compared to visiting walk in stores. It's very advisable to consider the above factors when trying to get valuable watches because they are worthwhile gem to get while still keeping time for your owners. Then there are the exclusively, not recognizable to all of us, unless we travel in certain elevated financial circles, they are.

W/E Apr 05 2010 11:19 pm I'm sure u have noticed that this is a prequel right? This shows what happened BEFORE E.U. I don't know about the rest of you guys, but the movie sets up the story for E.U pretty well. Other than that this is an awesome movie I highly recommend for ANYONE to watch it. Well except for Americans cuz u know, no English subtitles. Anyone meaning Cantonese and Mandarin

Ren Nov 09 2009 4:53 am A lot of people have been complaining that Laughing in the movie is totally different from the TV series E.U, which I agree. But there's one thing that everyone is forgetting, and it is that this is a PREQUEL. It's talking about Laughing's dark past, not branch leader Laughing who have a lot of followers in E.U and such. To me personally, the movie is well written. And the comment by wf, saying a lot of stuff about the script spoiling the movie and such. You are wrong. If you want to see happy branch leader Laughing, then go and watch E.U but this is a prequel, so Laughing is not a branch leader and he is merely just follower of a leader with no status yet. At the end of the movie, Laughing still chose to be an undercover. That's how the happy undercover branch leader Laughing came.

So to everyone who says that Laughing is an entirely different character in this movie, he is. Can you guys still Laugh and have fun when you are being chased and almost getting killed by people? Think before you guys comment.

wf Sep 06 2009 7:48 pm Don't blame the actor, blame the scriptwriters! The reason why Tse did not play the character the same way that made him famous is because the SCRIPT prevented him from doing so. In the first place, we loved the TV Laughing for his dedication and his whiteness all through -- this the movie utterly destroyed by having him start with a triad background. What happened to the top student at PTS who'd always wanted to be a cop and then never wavered from his chosen path? And then, the film industry seems intent on their outdated idea that all undercovers have to be brooding tortured souls -- the scriptwriters had absolutely no clue why the TV character was so well-loved, and the script showed that they hardly cared that they were destroying one of the most popular characters in HK TV history. The movie Laughing IS an entirely different character, and the final scene in the movie is proof enough that given the right script, Tse absolutely can play Laughing the way we all loved.

lung gor Sep 02 2009 1:05 pm Laughing gor is a okay movie. i think that they exaggerated the movie alot though. like i don't get why laughing was a double undercover thats just too much. i mean like if they are gonna make a prequel it should at least connect to E.U. its really obvious in E.U that laughing wanted to be a police more than he wanted to be a cop so the movie should stick with it.

Review by Neo: Don’t get me wrong, Laughing Gor is not a bad movie, but as a member of the viewing audience, I was left disappointed. This is in spite of some scene stealing display from the ever versatile Anthony Wong and Francis Ng. The real problem lies in Laughing Gor which quite frankly is Michael Tse himself. It goes without saying that Tse was wonderful In the TVB series EU, the show that reignited his much deflated career since the Young and Dangerous days. Tse was always stunning with his hideous laugh, sarcastic overtones yet an underlying humanness about him that won over the tiny territory audience on the small screen a little over half a year ago. Basically, he was likable, associable and lucky. However, despite the film using the Laughing Gor’s character name, Tse rarely laughs and even rarer are his infamous sad jokes. Instead in the latest movie, Tse tries too hard to become Tony Leung Chiu Wai that ended up spoiling the movie and also in the process denying the audience a character that they have paid to see and hear. Now that’s pure disappointment on my personal behalf.

The movie goes like this: Laughing Gor goes undercover to infiltrate the triads; little do the cops know that Laughing is previously bounded to one of the triad leaders (played by Anthony Wong) who in turns allow Laughing to stay within two codes. To further complicate the matters, Laughing decides to go after Wong’s bitter triad rival (played by Francis Ng) sister. Torn between internal and external conflicts, this is essentially a story of how Laughing Gor came to be, himself in the TVB series, EU.

Directed by Herman Yau, the film is able to dislocate itself from its TVB style of filmmaking. With Yau at the helm, it is always safe to assume that the characters will take centre stage, as Yau is never a director that imposes too much indulgence onto oneself. The result is basically an effective triad drama that goes along the lines of a little film Yau made two years ago in the name of On the Edge.

Moving on to the performances, Laughing Gor played by Michael Tse is essentially the drawing card of the box office success. Laughing is a internet sensation whose popularity resulted in numerous blog pages, as well as a Facebook page that have more people visiting it, then my website. Still, the Laughing Gor we have all grown to love and enjoy in the EU series seemed to be an entirely different character. Call me a realist or whatever, but I pay good money to watch Michael Tse play Laughing Gor the character, not Tse trying to be Tony Leung Chiu Wai. The fact is that Tse will and probably never reach the heights of Tony Leung, but why Tse did not play the character the same way that made him famous is really beyond my grasp of human baseness. Some may say that I am overlooking the fact that Tse can actually act, but in my personal opinion, Tse should have a distinctive style as he have done so well in the understating and constant subtle laughing in the TVB series. Tonight and for that very reason, I am disappointed.

Another reason to add further disappointment to fans of Michael Tse, is that the likes of Anthony Wong and Francis Ng are able to create more, mention attention better and basically overshadowed anything Tse is trying to do and achieve. Wong and Ng are incredible and there is no question of doubt that both are at the very peak of their career. Wong is always a player who can act against type and the manner in which he cultivated his character is funny, playful and engaging to watch. Likewise, Ng is a brilliant character actor; few in his peers can overact and still manages to convince even the shrewdness of audiences. It is really no understatement that the film primarily works and maintains attention through the duo which in turns equates to both a pro and a con. Eric Tsang appears here and there in a cameo as a triad boss. TVB starlet and my personal muse, Fala Chen does well enough in her debut to justify another role. Her scene of anger in her brother (Francis Ng)’s house is both convincingly displayed and stoic enough to be believable.

All in all, Laughing Gor is both an effective undercover movie and a failure in terms of promoting the lead actor in Michael Tse. Herman Yau does his best with the resources on his hands, but one would really expect the story to be overblown to more dramatic proportions. The audience rarely feels for any of the characters and the very fact that Laughing Gor seems more like Angry Gor, does not help the proceedings. Still, there is a lot to like about this flick, if only to witness the experienced duo in Wong and Ng battling it out in both words and actions and perhaps the final moments of the flick, when Laughing Gor finally plays the character we are all missing and wanting. At the end of the day, the product that is put in front of our eyes seem more like On the Edge 2 than a movie about Laughing … (Neo 2009)