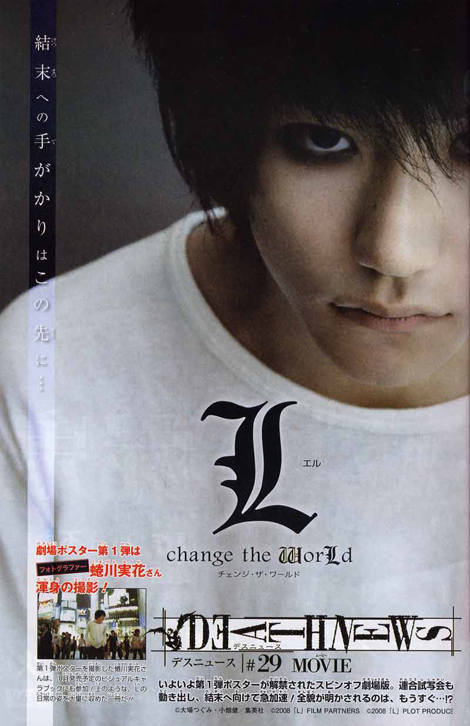 The last foe is a new “Death,” created by man. To solve the Kira Case, L (Kenichi Matsuyama) leaves Los Angeles convincing Kira is in Japan. At the same time, his intuition tells him that he may never be able to return to Los Angeles again…

After Watari left, L takes on the task of solving the cases left in Watari’s file. As all the cases are solved, a “gift” addressed to Watari arrives. The gift is a little boy. From the SD card the BOY (Narushi Fukuda) has in his possession, L learns that the child is the only survivor of the Thai village, which was exterminated. L also discovers that a huge conspiracy, utilizing a man made “Death,” was on the move behind the Thai village tragedy.

Meanwhile, L has another visitor. The girl’s name is Maki (Mayuko Fukuda), and she tells L that she has brought something her father, who died a horrible death, told her to deliver to Watari. As L realizes the item the girl brought is, indeed, the “Death” in question, pursuers are closing in. Protecting the two children, L physically makes moves to solve the horrendous case.

However, there were only 6 days left for him…

Jane May 25 2015 10:41 pm I like Light but I love L to the max and seeing this movie that is all about L, solving case in his final days, I love it but somehow I feel sad..ohh, why must he die?! Well, at least his legacy is in Near now...and Maki^^ I watch this movie countless times and never get tired of this...Kenichi is awesome!!! It's so cute to see L is babysitting 2 children ^^

Rhouan May Oct 03 2013 1:45 am My mom and I just recently watched Death Note and boy the disk itself is almost battered as we repeatedly watch this film over and over for this week alone. we love L, mom loves Light Y. another L movie perhaps. Maki should be in that film again.

KINB Feb 06 2011 1:01 am without Light, i still love L. this is not DEATH NOTE anymore because L put the note into fire. but I always be a HUGE FAN of L >"< and the girl with short black hair is so cuteeeeee

Kira Jan 01 2010 6:17 pm this film was amazing! well done Matsuyama-san x!! he was amazing as L. i dont think anyone else could have played that role better than he did! It made me laugh out loud but it was also very serious at some points. L is amazing and i definetly recommend it to anyone! it really is for the whole family!

In “L: Change the World,” the pale skin L has only 21 days left to live (reference “Death Note: The Last Name” for reasons why). His beloved assistant, Mr. Watari, also dies shortly into the film (again reference “Death Note: The Last Name” for reasons why) and leaves L alone to ponder his fate. Then a young Thai boy arrives at L’s HQ, having the innate ability to survive a deadly virus outbreak and is a mathematical genius. Meanwhile, a good friend of Mr. Watari’s, Prof. Nikaido, sends his young daughter Maki to seek the assistance of Watari. Since Watari is no longer alive, L takes the case and also temporary custody of the young girl.

During this time, Maki’s father kills himself to prevent an environmental extremist group from obtaining an antidote for a deadly virus. If the group known as “Blue Ship” obtains the antidote then they can spread the virus without fear. The leader of “Blue Ship” is the evil Matoba and he is assisted by a well respected doctor named Dr. Kujo. Once Matoba and Dr. Kujo realize that Maki holds the key to the antidote, they make plans to infiltrate L’s HQ and take the young girl back. Of course, our hero L has other ideas.

Even more so than the first two Death Note films, “L: Change the World” is a big budget “Hollywood” action type of film, featuring one dimensional villains, explosions, chases and races. There’s absolutely none of the cerebral mind-games that was featured so heavily in the first Death Note film. Rather, “L: Change the World” takes the commercial feel of the sequel, “Death Note: The Last Name,” and pumps it to another level. The quality of that commercial level isn’t so bad that the film stinks, but compared to “Death Note” its several steps lower.

Certainly, don’t go into “L: Change the World” hoping to see your favorite Death Note characters (outside of L). Tatsuya Fujiwara as Light Yagami appears on a computer monitor for a few seconds, Erika Toda as Misa Amane appears onscreen for less than a minute, and Shunji Fujimura as Watari appears onscreen for maybe 3 minutes. From there, it’s completely L’s world and with it, the cardboard characters fitting for a Hollywood like film. The most laughably over-the-top performance would go to Megumi Sato’s performance as the attractive but vicious assistant to Matoba.

And if you’re wondering about Ken’ichi Matsuyama’s performance as “L,” its pretty much what you’ve seen in Death Note but with more cartoonish mannerisms (the way he typed on the keyboard was overkill for me). He’s still a charismatic character that will likely bring viewers out in droves. One of the best moments in the film for me was the scene where L, Maki, and the Thai boy stopped in the Akhibara area of Tokyo. Watching the true otaku geek himself, L, walk around the mecca for otaku geeks was genuinely compelling, but of course this moment is short lived - this is an action film after all & there’s a chase to tend too.