Kagi no nai Yume wo Miru 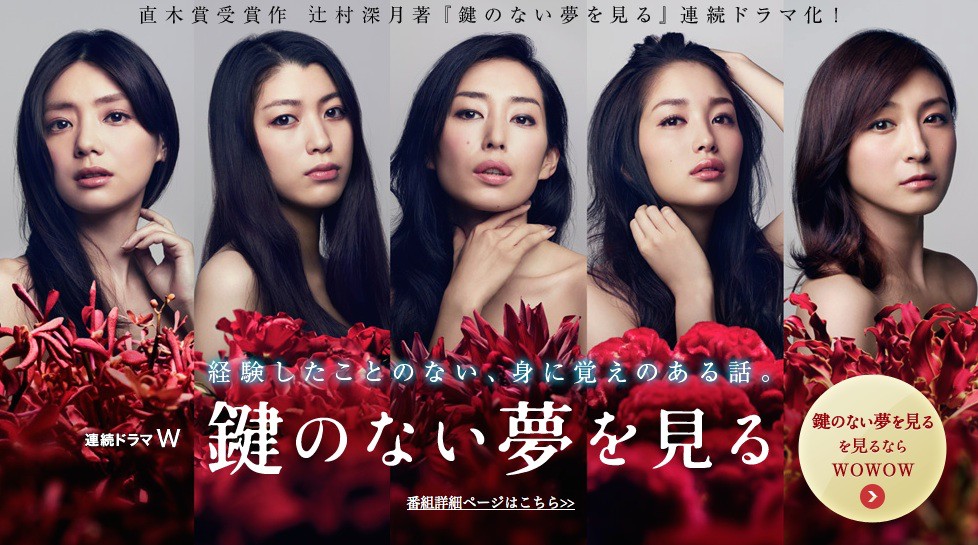 Miku (Kana Kurashina) and Yudai both majored in design engineering and are lovers. Miku hopes to write light novels. They often about their dreams, but years later, with reality set in, Miku works as a teacher. Meanwhile, Yudai still has big dreams. Miku can't break up with him. One day, Miku is shocked to learn that Yudai is wanted by the police for murder.

Mie (Riko Narumi) and Yoji head to sea. They first met 4 years ago through a dating website. Mie has always had a quite and indecisive personality. Yoji tends to lead in their relationship and makes decisions. Yoji also beats his girlfriend. Mie's mother realizes her daughter is in an abusive relationship and reports it to the police.

Shoko (Tae Kimura) is a 36-year-old employee for a foundation involved with business insurance. A fire station located in front of her parents home is burned. The act was a product of arson. She then meets Obayashi at the site of the fire. Obayashi is a fireman. Shoko met Obayashi six months earlier at the Civil Service Office. Shoko and Obayashi also dated at one time before that. A series of arson cases then occur. Shoko begins to suspect Obayashi may be the perpetrator and he is doing it to see her.

Michiru (Rin Takanashi) is a 28-year-old elementary school teacher participating in a shrine tour to pay her respects. She realizes the bus guide on her trip is her elementary school classmate Ritsuko. The bus guide does not recognize Michiru. Michiru remembers a scary case which took place in the small village where she attended school as a child.

Housewife Yoshie (Ryoko Hirosue) discovers her 10-month-old baby daughter is missing. She's at the shopping mall and begins to panic.

Yoshie always worried about having a child. Since the birth of her daughter, she moved to a new home an hour from the city. She has no friends near her new home. Her baby also always cried. Yoshie wanted to become free from a raising a chld and kept thinking about what her life would be like if she did not have her baby.

Can Yoshie get her daughter Sakura back?