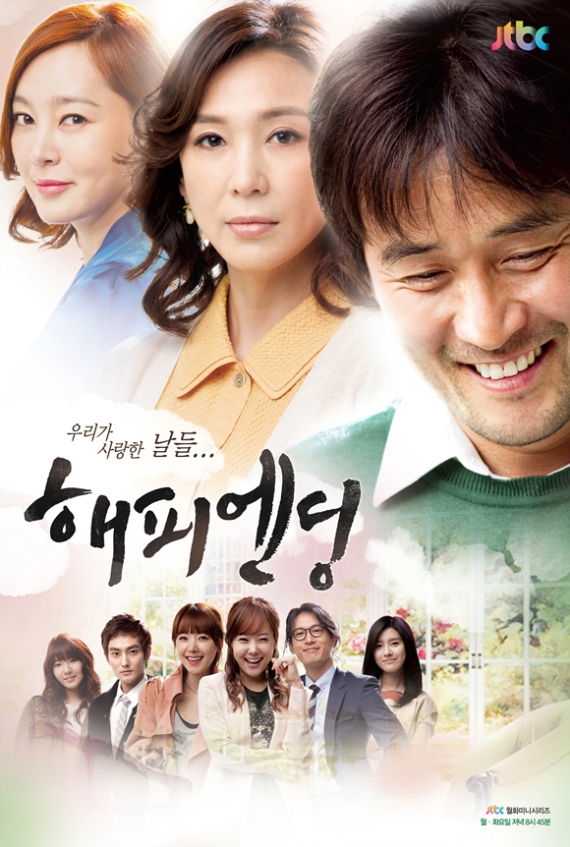 In "Happy Ending," the head of the family is Kim Doo-Soo (Choi Min-Soo), who works as a local news reporter at a broadcasting station. His work always keeps him busy. Meanwhile, he has a wife, two daughters and one son. His oldest daughter works, while her husband studies to become an attorney. His second daughter wants to marry a rich man and has just gotten a job. Meanwhile, the son is a high school student.

One day, Kim Doo-Soo feels an ache in his ribs. He takes some tests at the hospital and is stunned to hear that has a terminal disease. With not much time left, Kim Doo-Soo prepares his family for his farewell ...

Migthy Thor Aug 02 2016 9:58 pm Choi Min-Soo and Shim Hye-Jin are two of my favorite senior actors/actresses in Korea. This drama is so full of emotions! Very family oriented! A very heartfelt and heartwarming story. CONGRATULATIONS to the entire production!

kinggofing Mar 16 2015 2:22 pm @moviegirl yes, please do so, contact me at this email address if you have any news : naverm014 (somehow i can't post the comment by writng the email address completely but just add the gmail extension and that's my email) that's my email for shady transactions >:) (evil laugh) lol (same for everyone who finds it, please)

Josephine Oct 29 2014 5:23 pm Excellent plots, writers, directing, and casts. This is THE drama that I wish everyone would watch, reflecting all essence of real life. Thank you to all for making this wonderful movie.

moviegirl Jul 16 2014 2:37 pm Kinggofing, do you use twitter? If you do, tell me your name and I´ll contact you there :D. Or an email-address? I´m not confident enough to leave mine open here. Maybe you can make a new email account for me?

Kinggofing Jul 11 2014 7:54 am WUTTTT! i regret starting this series, i got hooked up by this so much until i reached the end of the 4th episode and found out that the rest of the series is nowhere to be found online, i even tried to search for it in asiatorrents but i had no luck. If anyone find the rest please reply here lol (il comeback time to time to see if there's a reply)

coffee looking for find a van to buy Jun 28 2014 10:06 pm Great article, this one got all covered. Nice article, everything has been explained well. One of the best articles! All my questions about the subject got covered!

Sammie May 30 2012 9:37 pm Can someone translate the episodes and place English subtitles? I am unable to go past the first episode because I have no idea what they are saying. (T-T)

B33 May 01 2012 6:32 pm @sarah,, please dont say such thing because it will only give people bad impression of Kim So Eun and her fans. i think she knows that by joining this project, she'll be able to learn a lot from so many great sunbaes though her role is not that big. please respect her choice. and the drama itself is actually good.

TinTin Apr 30 2012 6:30 pm Ooooh, I've got to go with 'The truth' on that one. Having just seen the 1st episode, I'm into this one! Starring, the lead actor from The Sanglass (Choi Min-su), which to date is still the most watched drama of all time, former Miss Korea, Lee Seon-Yeong, and the always fabulous Shim Hye Jin, Kim Seo-eun will serve as pretty window dressing in this one. When she has reached the status of these reknown stars, she can have her name listed at the top. As it is, I'm pretty sure that she'll be enjoying the ride, and the lessons learned therein.