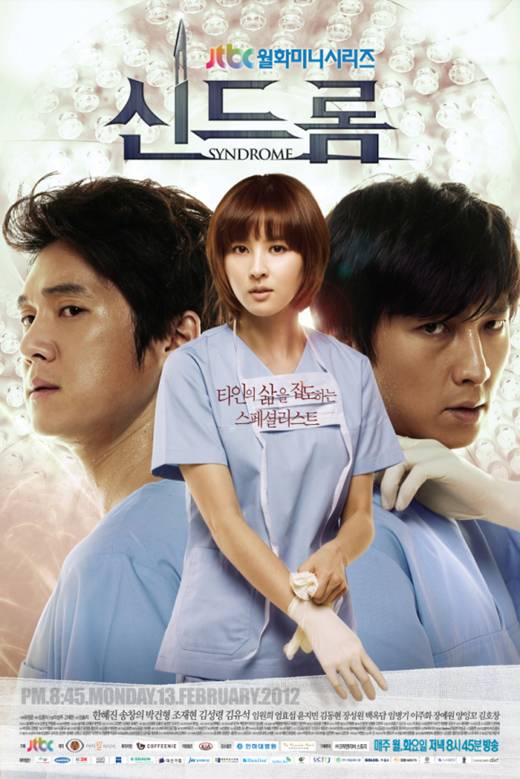 Syndrome is a medical drama set in the neurosurgery world.

Lee Hae-Jo (Han Hye-Jin) is a first year resident specializing in neurosurgery. She didn't graduated from a premiere medical school, but she is determined to become the best neurosurgeon.

Cha Yeo-Wook (Song Chang-Eui) is also a first year neurosurgery resident. Unlike Hae-Jo, Cha Yeo-Wook graduated from the best medical school and is the grandson of the chairman of the board at the Korea University Hospital. His background to become a doctor is impecable.

Kang Eun-Hyun (Park Gun-Hyung) is the chief resident of neurosurgery.

A love triangle begins between these three people.

Sonsarae Jun 13 2016 12:55 pm The writer of this drama clearly has an axe to grind with hospitals and doctors, there wasn't one good doc in the show. The interns were mental babies. I really don't like a show that decite is the only drama happening. This was one of those dramas that made me feel sorry for the actors. Oh well, win some lose some.

Angela boffardi Mar 11 2016 12:45 pm Excellent drama with wonderful actors. I love k dramas and wish Netflix would have more of a selection of them.

jee lally Mar 04 2016 9:38 pm does anyone know what the song is called from ep 20 when he is being taken down to operating theatre

Jill Feb 26 2016 6:39 pm I had never even heard of this drama before it hit Instant Netflix, but I am really enjoying it. Excellent medical drama. Neuroscience must be the most difficult subject in medicine: so many things can go wrong if a doctor makes one small wrong move!

Jinjoo Jul 30 2015 9:32 am i just finished watching this & i must say i was riveted, one of da best medical kdramas i've seen, the actors acted very well in their roles! what a story, it's addictive, this may be a few yrs old drama but it's worth watching n to me it's new since i hvnt seen it at the time it was aired! song chang ui was amazing in his acting as usual! kudos to the writer/director/ crew esp actors! luv it

Dianne Jan 07 2013 2:10 am I truly loved this drama -- the story kept the action moving, and the actors were fantastic. My favorite actor is Song Chang-Ui -- I've seen him in four dramas, all completely different types of characters, and his acting ability in each of these has been superb!! He has one of those faces that are hard to forget with his intriguing eyes and beautiful smile. I probably wouldn't have chosen to watch this drama if I hadn't seen that he was one of the main characters in it -- I'm glad I did choose to watch it, though.

Marilyn May 09 2012 6:09 am Park Gun Hyung was the one who really stand out in this drama. To bad that he was a lonely guy till the end. It was not a happy ending though. If only Han Hye Gin and he ended up together, then it will be a happy ending for viewers too. Once, in one episode Park Gun Hyung said that someone has to be alone despite his unwillingness, and that become the very sad destiny of Kang Eun Hyun. But this drama is better than brain. I really love this drama and now, Hong Gil Dong and New Heart is only my second favorite. This comes first. And I'm looking forward to more dramas to watch with Park Gun Hyung as the main character.

Tina Mar 26 2012 9:25 am It seems that it's almost same with KBS2 Medical Drama, "Brain" But, "Syndrome" has it fresh player. Hopefully, the ending is happy ending, but don't same it with "Brain"

creidesca Mar 11 2012 7:02 pm Eun-hee suffers from prosopagnosia, a face recognition disorder. All her memories are intact with the exception that she is unable to recognize the faces of people she's met.

She and Tae-jin are in a name-only marriage. They have never slept together once in their 28+yr marriage.

Joe Mar 11 2012 1:14 am Cha Tae-Jin = mad brain doctor, a husband cheater. He who thinks he is GOD. For Cha Tae-Jin: Live Patients's Brains = Human Guinea Pig. How may surgery patients' brains did Cha Tae-Jin operated on and missed around with during operation with give the patient's violent tendencies, loss of eyesight, maybe a lobotomy, and many other symptoms the patient received post surgery that they did not have before. Hopefully, Cha Tae-Jin gets a lot of malpractice lawsuits after failed neurosurgery....his license taken away by the Korean Medical Board (if there is one in this fictional drama), his wealth taken away. Why did Oh Eun-Hee (wife of Cha Tae-Jin and mother to Cha Yeo-Wook) let Cha Tae-Jin operate on her brain ... after surgery, very bad now Oh Eun-Hee cannot remember her son, her life before the procedure. Hopefully, Oh Eun-Hee knows about Cha Tae-Jin the husband cheater... is having affair with the other female doctor named Kim Yi-Joon.