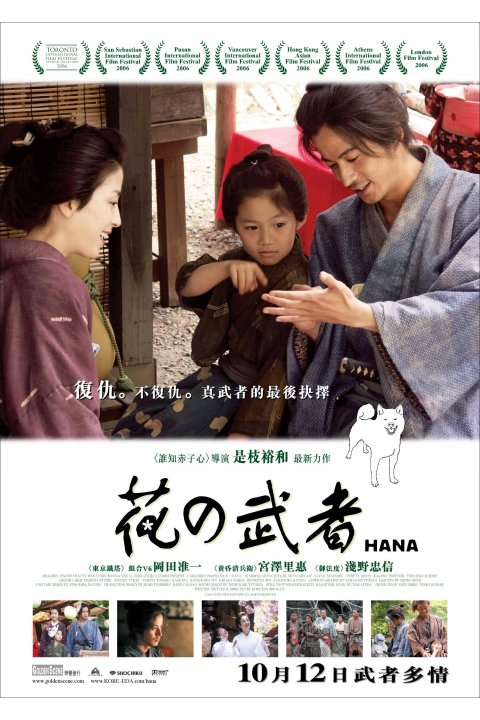 A samurai named Soza (Junichi Okada) has lived in the modest Edo shanty town for the past 3 years in search of his father’s killer. His father was killed in a petty dispute over the game “Go” and his last words to Soza were to revenge his death. Soza while honoring his father’s wishes has also been partaking in activities that are of interest to him, but unusual for a Samurai. This would include running a private school for the neighborhood kids and keeping birds as pets. He’s also become quietly attached to a widow named Osae (Rie Miyazawa) and her 8 year old son Shinbo. It’s also revealed through humorous scenes in the film that Soza is a terrible swordsman and actually scared of battle. When he finally locates his father’s killer Soza he now has to weight the teachings of his Samurai background against his own moral convictions.

Running parallel with Soza’s story are the various stories of the shanty town residents. The most notable story involves the fabled 47 Ronins. The 47 Ronins were a group of samurai that were leaderless after their master was forced to commit suicide because of an assault on a court official. The ronins then blended back into society, while secretly conspiring to exact revenge for their dishonored master. They patiently wait for over a year to launch their attack – all the while knowing they would be sentenced to death for their actions.

Heather Owen Jan 22 2017 5:24 pm I messed up the 'rating' thing, I wanted to give this adorable film 100%. One of my top favourites. It gently subverts the 'samurai revenge' genre of jidai geki while giving us some memorable characters and, among the picturesque squalor, some ravishingly beautiful scenes.

Ki Feb 06 2011 4:55 am Hana Yori Mo Naho” is famed director Hirokazu Koreeda’s (After Life/Nobody Knows) first period piece set within Edo era Tokyo. The film challenges the romanticized view of the Samurai by capturing the pathos of a poor community in the slums of Edo - where numerous Samurai live – in a surprisingly humorous and light hearted manner. The film also features an impressive ensemble cast and various subplots that run throughout the film.

ith the gentle nature of “Hana yori mo naho”, even the tale of the 47 Ronins was told in a light hearted manner. Unusual for Samurai films, Hirokazu Koreeda purposely left out any violent battle scenes.

Visually the film excelled at showing the flimsiness of the Edo shanty town while still bringing to light the colorful nature of their community. The soundtrack employed an odd – but appealing – Scottish/Irish like musical score. The large ensemble cast were tops, most notable of which would be Junichi Okada, Rie Miyazawa, Ryo Kase and Teruyuki Kagawa. Tadanobu Asano also appears briefly in the film as Kanazawa. As with most of Tadanobu Asano’s characters, Kanazawa is a muted character that speaks very little. What’s the chances Tadandobu Asano would play a hyperactive loud mouth one of these days?

While the gentle, almost TV drama like, flow of “Hanan Yori Mo Naho” was a pleasure to watch, the overall impact of the movie was diluted by a few questionable decisions on the part of Hirokazu Koreeda. The film lost some of its luster by the second half of the film, as the overabundance of characters and subplots started to weight down the film. Less characters and a few minutes shaved off the runtime would have done wonders in this department. An even more compelling issue would have been with the manner in which Koreeda unveiled his pacifists message. Soza was a samurai that easily got roughed up and even ran away (funny scene) from confrontation. Consequently, his final act, in regards to avenging his fathers death, appeared to be acted out not by any moral convictions but rather out of pure necessity. In most films this wouldn’t be an issue, but when critiquing a long held notion of society past, Soza’s actions rang hollow within the realm of Koreada’s message. Ultimately, “Hanan Yori Mo Naho” is an engaging period piece that doesn’t rank among Koreeda’s all time best.