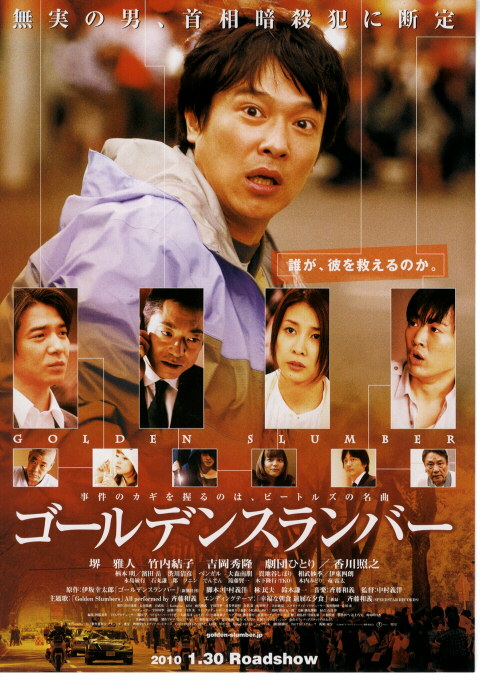 "Golden Slumbers" depicts people's ties through the escape of a young man who is falsely accused of assassinating the Prime Minister.

The first prime minister from opposition party, Prime Minister Kaneda, is inolved in a car parade through the Sendai area of Japan. Meanwhile, delivery man Masaharu Aoyagi (Masato Sakai) has a reunion with former college classmate Shingo Morita (Hidetaka Yoshioka). Then a sudden explosion occurs killing the Prime Minister Kaneda. The police runs toward Masaharu Aoyagi with their guns pointed at him. Shingo even tells Masaharu that he has become Lee Harvey Oswald. Masaharu flees the scene ...

kai May 15 2016 8:35 pm Kotaro Isaka is a great writer. I think this is the best movie adaptation of one of his books (though I love the others too). Brilliant job. And yes, way better than a Hollywood plot.

Lilyna Oct 01 2013 10:58 am @clinster - the ending song by is Saito Kazuyoshi- Happy breakfast, boring dinner (幸福な朝食 退屈な夕食) . You can search in youtube for the song.

Molybdenum Studios Jul 23 2013 3:07 am I love Sakai Masato-sama's portrayal of a heroic delivery man-turned-accused for terrorism guy. The film is not very serious if he's the lead star! Love this one!

nadzskie Jul 07 2013 9:02 am glad to see fellow Filipinos appreciate this movie. liked Sakai Masato since JOKER, and he didn't disappoint me here :)

Pancho D Aug 16 2012 12:27 am Rommel, I'm watching it right now on Screen RED, and I totally agree. We Filipinos should learn more from the powerful storytelling and subtlety of the Japanese instead of following Hollywood around like a dog.

If you see this, could you give me a summary of the plot, I wasn't able to see the whole thing :(

Rommel Reyes Aug 15 2012 1:49 pm i'm just a guy from the Philippines, i watched the film today on a cable channel.loved the storytelling and characterization. Japanese movies are way better compared to hollywood.