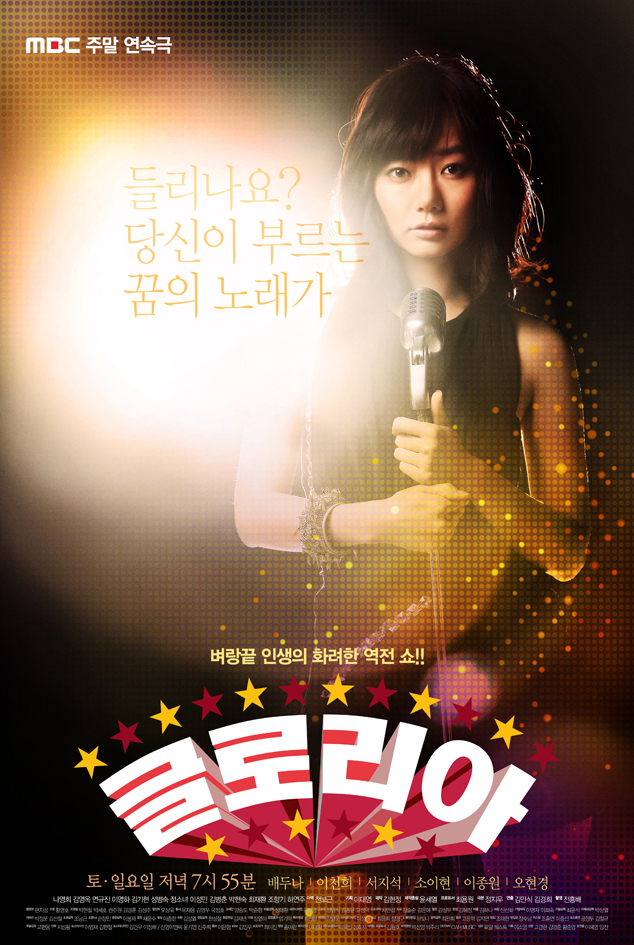 "Gloria" centers around one woman's growth during difficult circumstances and the two men around her. Na Jin-Jin (Bae Doo-Na) lives with her mentally disabled older sister Na Jin-Joo (Oh Hyun-Kyung), who possesses the mental capacity of a 5 year old. Na Jin-Jin dreams of a becoming a singer after she performs an impromptu version of Laura Branigan's "Gloria" for a nightclub.

Ha Dong-A (Lee Chun-Hee) is a loyal man with a warm and pure personality. He raises his young nephew. He develops a relationship with Na Jin-Jin.

Lee Kanna-Suk (Seo Ji-Suk) possesses a cold personality and is the secret son of Chaebol family. He doesn't believe in love due to his relationship with his parents, but this all changes when he meets Na Jin-Jin. For the first time he experiences love and happiness. Jung Yoon-Seo (So E-Hyun) is the secret daughter of a Chaebol family. She gave up ballet after suffering an injury. Both the lives of Lee Kanna Seok and Jung Yoon-Seo will be changed forever when they encounter Jin-Jin and Dong-A ...

Sakura Dec 23 2019 3:15 pm Watching this I made it up to episode 48 if I not mistaken or 47 and when I realized it was almost over I decided to quit but then again I got tempted by the release of SBS's Six Flying Dragons on YouTube.

Gloria rating?: All I can say is this show should have been 20 episodes at 50 minutes each and not 50 episodes at 20minutes each of character development(I know it was longer episodes but the content was worth a maximum of 20minutes).

Un modeste admirateur Dec 21 2019 12:24 am "Gloria" is one of my favorite dramas of all time. I've rewatched many times the first 20 episodes or so, and I will certainly rewatch them again. I confess I've never managed to go beyond, and to finish the entire drama, which may sound very odd, given the high praise I just gave. But I think one can have a favorite book and yet read only particular chapters from it. In any case, "Gloria" reads to me a lot like a book, because of the depth of its characters, and the raw intensity of their relationships. And I am not talking just love relationship (Jin-Jin and Kana-Suk, Dong-A and Yoon-Seo), but also mother and son (Kana-Suk and Young-Hee) or sister and sister (Jin-Jin and Jin-Joo). The most amazing is that writer Jung Ji-Woo authored both "Gloria" and "Pick Up the Stars/Stars Falling From the Sky" the same year. Absolute genius! I hope I will live to see newer dramas from this writer.

Floria Aug 19 2016 3:45 am i thought Jin Joo must be a big part at the beginning since she hold a pretty big secret, but her storyline turned out to be suck at the end just because she's a supporting role. i found her forbidden with Ji Suk quite interesting but the writer seem to ignore it and that's why the drama became boring at the end

namitala sharitah scarlet Jan 30 2014 2:09 am gloria was so mean towards lee kang suk because of his elder's behaviours yet dat hunk did not know anything.poor kang suk.

tauhuky Feb 22 2011 7:02 pm The more episode I watch, the more I love Lee Ji-Seok > He is so handsome. Hopes, he will be present lots more leading role in drama series

pl corp. Feb 14 2011 2:10 pm I like Suh ji Suk very much especially when he smiles. Hopes, he will have many more leading roles dramas

kdramaaddict Dec 28 2010 6:22 pm I love this drama - cannot wait every weekend to watch it. I love all the characters and the storyline.

@Shin's Chuck - I live in US also and was wondering when does Gloria is shown on MBC America? I always searching for other channel to watch this program.

Shin's Chuck Dec 06 2010 5:03 am My wife and I watch this every weekend on MBC America.It has become my favorite TV show,can't wait for the next episode! NCIS... TWO AND A HALF MEN...who cares? can catch them in reruns:)

Kdramalover Dec 05 2010 10:28 am Bae Du Na and Seo Ji-Suk make a fantastic couple. The sparks just fly between these two. With the exception of Seo Ji-Suk's mother, other characters just get on my nerves. The stalker brother is annoying and acts like he's miserable in his role.

mon Dec 03 2010 2:22 am I love this drama very much when Jin Jin and Kung suk are together. I hope happy ending for them. I like Bae doo na and Suh ji Suk very much. I think they are perfect match!!

Kdramalover Oct 31 2010 4:03 pm Addicted to this drama. The music is fantastic. Just hope they don't cut the series short. That would be a major letdown.

RamenLover Oct 06 2010 1:48 am I got a love/hate relationship with this series. The cinderella element is appealing and I find 3 out of the 4 main characters always interesting (Bae Du-Na, Lee Cheon-Hee, Seo Ji-Seok) with the always miserable/robotic "rich girl" Jung Yoon-Seo monotonous to the extreme. The main villain rich son Lee Ji-Seok is way too over the top for me. Also the way series always harps on the "watch person mix with poor folks" works initially but that angle gets harped on too much. You can watch Seo Ji-Seok sell "kimbop" on the streets or eat "chachangmyun" so many times before its not a big deal. Also I find it nearly impossible to believe rich girl Jung Yoon-Seo would work in grannies food stall - maybe I'm a cynic but no way that happens in real life. But the positive side is the blooming romance between between Bae-Du-Na and Seo Ji-Seok. That works. Also Seo Ji-Seok's mother who works in the nightclub is an interesting character. I'm about halfway through the series and enjoy most of it but with caveats.

Ammy Aug 02 2010 4:01 am The storyline sounds very interesting and I think Jisuk is fit in with his character. He is so handsome and cool. I can't wait to see the drama.

RamenLover Aug 01 2010 6:03 am Watched the first two episodes of "Gloria" and I think I am going to love this drama as much as "Brilliant Legacy". Bae Du-Na literally and figuratively kicks ass in the series and the supporting cast so far all have their own appeal. Can't wait for next week! Highly recommend anyone interested in the series to check it out!