Flowers for My Life 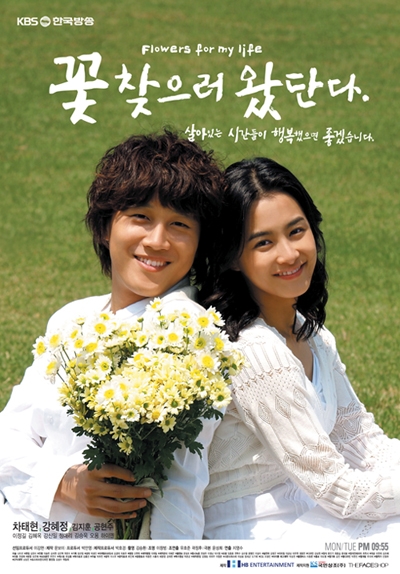 "Flowers for My Life" tells a love story between a man facing death and a woman numb to death.

Na Ha-Na's (Kang Hye-Jung) father is a funeral director, so she has been exposed to death in a manner where she believes it's a part of life. Ha-Na has always enjoyed money since a very young age. Her goal is to make a lot of money. Ha-Na works now works at the Seoul Funeral Hall. She frequently deals with the death of young rich men. Her new plan is to meet and marry a wealthy man with a potentially short lifespan. To meet such a man, Ha-Na studies hard and eventually gets a job at a hospital as a nurse's aide.

Yoon Ho-Sang (Cha Tae-Hyun) is a positive young man. He acts as a guarantor for a loan, but thing don't turn out as expected. Ho-Sang is now chased by loan sharks. One day, Ho-Sang goes to a mansion to make a delivery. There he meets Wang Dae-Park. Without knowing the reason, Ho-Sang is hospitalized in a V.I.P. room instead of Wang Dae-Park. In the hospital, Ho-Sang bumps into a loan shark and is chased into the morgue. There he meets Ha-Na ...

Lienojog Dec 28 2015 8:12 am I am not fond of tv drama, but when I tried to look after any tv/movie that starred Kim Ji Hoon, IFLIX lead me to Flowers Of My Life. And believe it or no I was hooked for 3 days watching the 16 episodes. The tv series is great, too bad that it is only after 8 years that I have watched it.

There are so many lessons to learned on this series -- about living and dying, loving and forgiving, character and a lot of family values.

This series should have receive a nomination for an EMMY moreso a citation for some of its roles potrayed by the actors in the lead roles and supporting roles.

My 3 days spent watching this series is something worthwhile.

KJK&CTH Dragonz Nov 20 2015 11:47 pm The ending was a little sad when Ho Sang died.. ㅠㅠ It was so heart breaking to see him smile the video to thank them for the funeral and tell everybody including his Chewing Gum that he loves them.. However I consider it as a nice ending, not quite a happy one coz he died, but a nice one. Ho Sang was buried at a place he likes, and everybody smiles at the thought of him.. As an overall this is a nice drama, a funny and touching one at the same time. 대박!!

uche pascal Nov 06 2014 4:55 am I fell into tears at the end of this movie, and even after days of watching it I still can't get rid of my sadness when ever i remember that movie and also envy for such a great love around warmth people, even at the verg of death they where determined to live life to its fullest to get the best out of it and leave warmth memories behind no matter how much time they had, and not to leave everyday like is the last day. I am really touched, I love south Korea, thanks for that grt movie, I learnt a lot, and I hope I found the kind of flower I too came in search of on this earth.

Jen Sep 06 2009 12:31 pm It's amazing how no one has noticed this drama! It's one of the best out there. It filled with moments where i laughed my ass off, and moments where i couldn't help but cry. This is seriously a great drama and everyone should give it a try. I'm sure you won't regret it.