Don't Laugh at My Romance 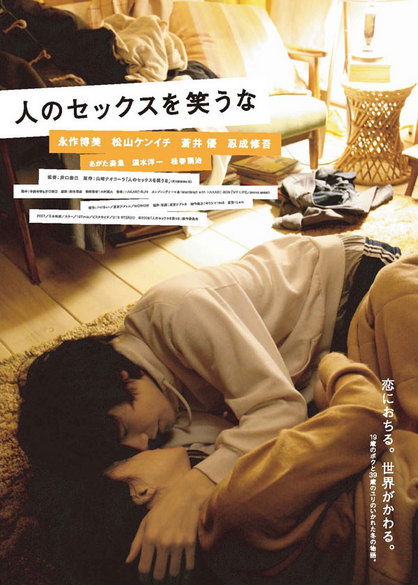 Mirume (Ken'ichi Matsuyama) is a 19 year old college student who falls in love with Yuri (Hiromi Nagasaku), an almost 40 year old art teacher at his university. Yuri isn't your typical college professor, having a quirky sense of humor and unpredictable personality. When Yuri invites Murume to her studio, she playfully seduces the still naive 19 year old student. Things become more complicated when Murume discovers that Yuri is married to a much older man ....

Kanji Naki (Senna) Apr 29 2010 10:03 am I not only think Ken'ichi is hot and adorable but also Shugo Oshinari. Hes alittle hottie as well both very gorgeous actors. I wish I could be in this movie. OH god how amazing but i need to watch it badly like over and over i want to so bad. Maybe go to japan and get it there. Oh damn I want them. I wanna be in the kissing parts. hehe that would be epicly amazing! I wanna be in DeathNote too that would be great. I love asians.

kanji naki Apr 29 2010 8:37 am Im going to go see him in reality i love him so much hes a great actor my mommy says i look like him but im not a dude lol i cant wait to meet him im going to glomp him and little hearts are going to float up in the air lol kinda like an anime lol its going to be magic

finishing Aug 27 2009 2:15 am I can't find the subbed or raw anywhere! The one posted on mysoju was corrupted and needs repair... does anyone know where i can find another version?? do i have to download it in order to watch it??

ImaniRine May 30 2009 6:12 pm The movie starts off like another college setting movie, with the students on their regular basis and then running into teachers. I liked the part where she got in the truck so... drunk. It was funny. The two characters are cute when they're together and its sort of silly when Aoi's characters ducks behind the counter and still works handing the guy his money. He's so tall and she's so short. I like the main sing too, 'ANGEL' , hopefully I can get it and listen to it. This movie is really goofy hope it ends well...

Rin Apr 18 2009 10:52 pm RamenLover, yeah I know her.. I'm a japanese, eto.. watashi wa Matsuki Haruna desu.. demo, Rin-chan wa to yon de kudasai.. I'm Matsuki Haruna.. that's my name *laughs* but call me rin if you want.. I don't like ngasaku hiromi much.. yes she has nice films but I don't really like her.. because... I'm a big fan of Yu Aoi!so, incase you're wondering why I don't like her.. by the way.. I don't like her but it doesn't mean I hate her.. she's pretty but I don't really like her as that role.. but the film is good to watch.. nice actress and actor.. thanks again!

RamenLover Apr 17 2009 1:23 am Rin, Hiromi Nagasaku (main actress) is really good. Check out some of her films like Funuke Show Some Love, You Losers! (black comedy) or Su-ki-da (pure love). You can't ever pigeonhole in one type of character which makes her really interesting to watch.

AI SHITERU!!! if is real that pineapple said.. that Kenichi only use boxer ^Q^!!!!

pineapple Apr 11 2009 9:08 pm just watched it,,,,the movie is pretty boring, but i fell in love with kenichi in this movie more!!!! theres a lot of scenes where he only wears boxers!!! yay!! but lots of kissing scenes too,,lucky girl :((( got the movie here with subs http://www.dlaznmovies.com/2009/04/dont-laugh-at-my-romance.html

Ki Apr 11 2009 12:13 am “Don’t Laugh at My Romance” sure seems to have all the pieces for a great film. There’s Japanese heartthrob Ken’ichi Matsuyama making a return to his early indie film roots days, everybody’s favorite sweetheart Yu Aoi playing the kind of quirky gal that shot her to stardom in “Hana and Alice,” and Hiromi Nagasaku turning in an Anne Bancroft like performance but distilled through the distinctive lens of a Japanese indie film director - Nami Iguchi. The storyline also packs the punch of a female art teacher seducing a much younger college age student and multiple love triangles interwoven into that setup. There’s also a surprise revelation about the art teacher’s personal life that throws everything off kilter. With all these promising aspects I did find myself having really high expectation for the film and during the early portions the film sort of delivers. Unfortunately, as the movie plods along with pacing fit for a tortoise drugged out on morphine I drifted off into sleep on more than one occasion.

In “Don’t Laugh at My Romance,” unconventional & almost 40 year old Yuri (Hiromi Nagasaku) begins teaching lithography at the local University. The day before she begins teaching, she misses the last train home and finds herself running barefooted through a tunnel (symbolic? — you betcha!). Three college aged kids in a pick-up truck stops nearby and gives her a ride home. The next day, Mirume (Ken’ichi Matsuyama) sits in a smoking area of the University. A lady then sits next to him. He notices almost immediately that the lady is none other than Yuri, the woman they drove home the day before. Meanwhile, Mirume’s friend En-chan (Yu Aoi) sits nearby watching Mirume as she has an obsessive crush on him. En-chan also sits next to Domoto (Shugo Oshinari), a guy that is secretly in love with En-chan and is also best friends with Mirume.

Mirume finds himself attracted to the older Yuri and finds her later in the day working in the art lab by herself. The buoyant Yuri then asks Mirume to model for her in the coming days. The teacher and student then travels to her studio in the countryside …

While watching “Don’t Laugh at My Romance” it doesn’t take long to notice the influence of Nobuhiro Yamashita, specifically Yamashita films like “Linda Linda Linda” and “A Gentle Breeze in the Village.” While Nobuiro Yamashita has an undeniable talent for seamlessly blending in blissful moments of tranquility with storylines that captivates throughout, Nami Iguchi forces a similar indie style to the detriment of the story itself. Frequent, long distance stationary shots of characters moving away into the horizon becomes progressively more distracting as the story progresses. This Asian reviewer’s already slanted eyes became even more slanted just trying to out make out what was occurring on the screen. More advanced viewers may wring significant meanings from these types of shots, I just felt it was a classic case of a director falling in love with singular shots and, consequently, missing the forest for the trees.

On the other hand, performances are generally strong with Ken’ichi Matsuyama turning in just the right toned downed performance as the love struck younger lover. Hiromi Nagasaku plays the older lover equally as well, with just the right amount of agreeableness and injecting her character with a slight sense of mystery. Early on, Yu Aoi’s brief scenes stood out as she provided the “kawii” factor in spades. Her role then becomes more prominent towards the latter portions of the film and during these times the heavy quirkiness felt more forced, making me wonder if she was encouraged a little too much to recreate the type of character she portrayed in “Hana & Alice.” As an analogy, if Kenichi Matsuayma was forced to sit like a crow during the latter portions of the film, while constantly eating candy and typing on a keyboard with only his index fingers, it just wouldn’t work right?

Make no doubt about it, “Don’t Laugh at My Romance” does have many moments of sweetness & goofiness. Unfortunately, the film has just as many incredibly slow scenes that caused this viewer to squirm in his chair when he wasn’t nodding off into sleep. The characters are all interesting, the storyline is very appealing, but unfortunately that quintessential Japanese indie film style used so heavily in “Don’t Laugh at My Romance” just wreaked of form over function.