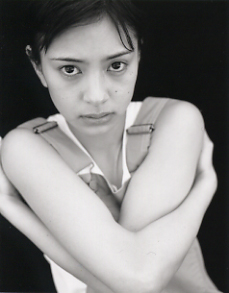 Born in Nara prefecture. Actress, musician and model. Special skills are classical Japanese dance,action and sword fight. Excels at swimming, volleyball, boxing,English conversation, calligraphy, playing piano and guitar. In 1999, she released a CD making a debut as asinger. Also working as a model, she appeared in her first film “Mohouhan” by Yoshimitsu Morita. In 2003, Vodafone CM featuring Fujita hit the limelight. In “Inu-neko” by Nami Iguchi(2004),she played the leading parts with Kanako Enomoto,and received a high evaluation for acting as a nonchalant girl so naturally and sensitively. This movie won the Jury's Special Award, the International Critics Federation Award and the Best Writing Special Award at Torino Film Festival in 2004. The Director Iguchi also won the 45th New Director Award from the Directors Guild of Japan. In 2005,Fujita appeared in “In-the-pool” by Satoshi Miki with Suzuki Matsuo and Jo Odagiri. In “DEATH TRANCE” by Yuji Shimomura(to be released in 2006), she will play a role of “Queen of Destruction”,challenging a risky action sequence using wires. Her sensual beauty will become the focus of attention.