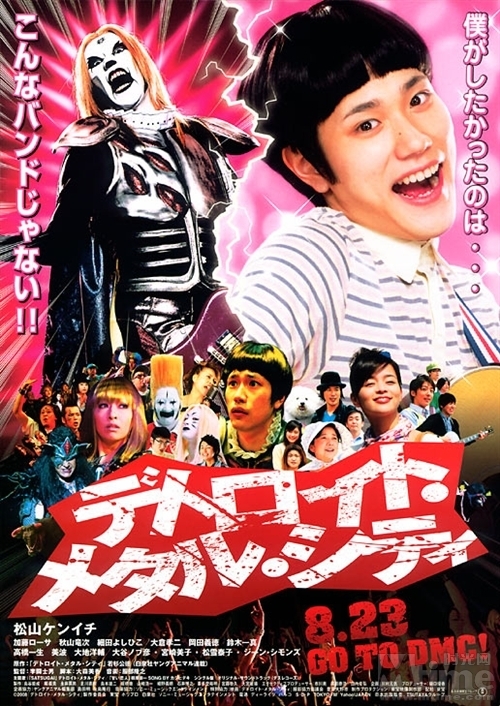 Soichiro Negishi (Kenichi Matsuyama) is a music obsessed young teen, making the jump from his rural hometown to the big city of Tokyo. His goal is to become a successful musician, but not your typical J-pop star. Soichiro Negishi has a love for indie twee pop. The kind of music popular in the trendier areas of Tokyo like Shibuya. Unfortunately for Soichiro Negishi he fails miserably in gaining any type of following for his music. Then one day he spots a flier for a music agency looking to recruit musicians. With his home-burned CD in hand, he enters the music agency’s office.

Fast forward a few more months and Soichiro Negishi is now the front man for an up-and-coming band. Unfortunately for Soichiro, the band is an ultra-heavy death metal band that sings about Satanism, rape, & murder. The band also parades around in make-up reminiscent of the heavy metal band KISS crossed with Ziggy Stardust era David Bowie. As you might guess, Soichiro is absolutely miserable performing this type of music, but his fear of his abusive female manager keeps him in the band. Meanwhile, Soichiro runs across old college sweatheart Yuri Aikawa (Rosa Kato). Yuri shares Soichiro’s love for twee pop and works for a hip magazine as a music columnist. Sochiro is too embarrassed to tell Yuri what type of music he now plays. Can Soichiro gain the affection of Yuri without Yuri discovering the truth behind his day time gig? Complicating matters even more, the infamous death metal artist known as Jack (Gene Simmons) is set to retire, but first sets out on a farewell world tour. Soichiro’s band “Death Metal City” then gets thrust into a death metal challenge with Jack for the adoration of all Japanese music fans.

Stafaband May 08 2020 5:27 pm I don't even know that DMC has a movie. I watched the anime recently and is really hillarious. Amazing

Lomba Blog Aug 17 2018 9:36 pm I don't even know that DMC has a movie. I watched the anime recently and is really hillarious. Definitely love Krauser and the band. But the movie is kinda off for me. Kenichi is a great actor but the anime version is still the best.

FromPHwithlove Nov 06 2017 6:01 am This movie is so hilarious! Kenichi is just simply amazing! I love him!

umeboshigaru Apr 07 2011 2:43 am i watched this film by chance (while chaning channels): I just stopped and saw it till the end. it's really hilarious, the way the hero acts and his boss, etc. it's a MUST SEE movie.

Robyn Feb 14 2011 10:43 pm I have read the manga and seen both the anime and the movie. They are all excellent. The humour really works well and plays on Soichi Negishi's double life as a sweet law abiding young man who respects his parents and loves his family and the demonic front man for a death metal band. The humour lies in Soichi's guilt and dislike of the music he sings and the fact he is trying to hide it from everyone. But when he gets angry, his inner Krauser emerges to hilarious effect. The scenes in the movie were especially funny. The one where is stalking Yuri at the funpark and when he is singing with Saji in the bathroom. Some of the funniest scenes are with the fans, they are so fanatical they really do believe that Krauser is a demon from hell. I heard that there was going to be an American remake, I doubt it will be as good as the original though.

Mojca Aug 04 2010 8:09 am RamenLover Says: ''I would like to know the name of the song as well (also the song the singer of Tetrapod Melon Tea sang with Johannes Krauser II in the public bathroom) .. both songs were excellent!''

Krauser-tan May 28 2010 10:25 am Does anybody know who is the actress for Soichi's sister? A picture of her can be located right above the lower right corner picture. Thanks.

mike-elf Oct 31 2009 3:29 pm I've seen the anime & have read the manga too You can call me a fan of this with the view of the bad art of the manga & anime which is on purpose this move was so good I really liked it ( thought usually movies bassed on anime wont come out that good this one was really good funny ,musical are the traits of the whole thing I had fun watching this one too & the min actor did this very good

RamenLover Apr 08 2009 2:20 pm I would like to know the name of the song as well (also the song the singer of Tetrapod Melon Tea sang with Johannes Krauser II in the public bathroom) .. both songs were excellent!

scienceandprogress Apr 08 2009 2:10 pm Does anybody know the title of the song Hideki Kaji is singing when Soichi first meets Aikawa?

WikiSysop Mar 27 2009 1:44 pm thanks for bringing that up @_@. I was meaning to go back and look for Masami Nagasawa and did not see her and from further research she performed in the anime version of "Detroit Metal City" as Yuri but not the live action version. Kaera Kimura does appear as the singer of Detarame Mazakon, the girl rock band from Hakata in the live version. Cast list has been updated.

Ki Mar 02 2009 2:16 pm If you’re not a native Japanese person and you come across the title “Detroit Metal City” what would you think of? For myself, I would think of early U.S. punk bands like MC5 and Iggy and the Stooges. Strangely enough, the new Toshio Lee film “Detroit Metal City” isn’t a documentary on the early punk bands from that music era, but rather a hilarious film dealing with one person’s identity crisis between his daytime job (death metal band lead vocalist) and his true calling (indie pop star wannabe). There’s also romantic-comedy elements strewn inbetween his identity crisis. The film stars Ken’ichi Matsuyama, one of the most popular Japanese actors today (hint Death Note), and Rosa Kato as his love interest sidekick. Oh there’s also a lengthy cameo appearance by Gene Simmons from KISS. Can all of this be true you ask? The answer is absolutely — dude!!!

“Death Metal City” is a hilarious mishmash of musical styles and movie genres. You have the identity crisis element found in many popular comic books like Superman & Spiderman, the romantic-comedy elements found in many Asian films, and the odd emphasis on two completely disparate musical styles (death metal and indie twee pop). There’s also many amusing satirical moments on the trendiness of Tokyo youths.

First off, the music in “Detroit Metal City” is absolutely great! All too often when you watch fictional rock bands in Japanese films, the bands look completely menacing but sound absolutely pedestrian (Nana! The Suicide Club!). The music blared out by the fictional Detroit Metal City band sounds completely authentic and kicks ass like proper death metal should. Meanwhile, the indie pop favored by Socihirio Negishi sounds completely authentic in that twee pop style popularized by labels like Labrador from Sweden. You also get to hear names like Cornelius and Kahimi Karie name dropped by Soichirio Negishi (Kahimi Karie even performs on the soundtrack). The site gags are unabashedly low brow but works most of the time. Watching Sochiro Negishi’s alter ego Johannes Krauser II sing happily along with the lead singer of Tetrapod Melon Tea in a public bathroom was completely priceless!

The movie is based on a popular Japanese manga that has sold over 2 million copies. How faithfully the movie stays to the comic is hard for me to say since I have never read the original manga. With that said, the movie feels like a complete entity in of itself and doesn’t have the head scratching moments of other movies that tries to adapt itself from a lengthy comic. Ken’ichi Matsuyama’s performance is over the top, usually playing the meek Soichiro Negishi and outlandish Johannes Krauser II to exaggerated extremes. All of which works to rev up the comedy element. One of the few weak points with “Detroit Metal City” would lie with the casting of Rosa Kato as his love interest. Although she plays the gentler side of her character well, she doesn’t carry the “hip” factor needed with someone in her character’s stature.

WeTakePictures Nov 08 2008 12:26 pm I actually haven't heard of this one but It sounds like to definitely catch

Raku Aug 25 2008 5:24 pm I read some of the mangas when i first heard about the movie adaptation, if it's as good as them it means it will be awesome.

Mollie Aug 19 2008 8:03 pm This looks waaay cool. It has Ken'ichi Matsuyama-sama, first of all, it's death metal(yay), and it has Gene Simmons! Yippie!! The costumes look fantastic as well. If this is a hit, no doubt we'll be seeing Johannes Krauser II clones at the next Anime Expo.

RamenLover Aug 14 2008 8:52 pm This one looks great. If the film is as good as the premise, this may turn out to be as funny as Swing Girls or Survival Style +5. Can't wait to see this and got my fingers crossed!!!