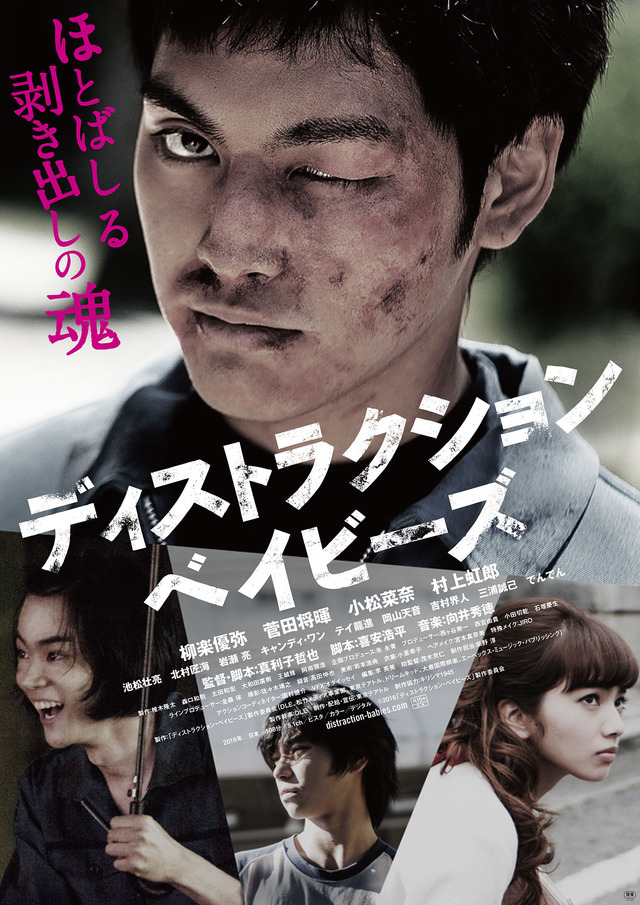 Taira Ashihara (Yuya Yagira) and his younger brother Shota (Nijiro Murakami) live by themselves in the small seaport town Mitsuhama in the western part of Matsuyama, Ehime Prefecture. Taira Ashihara always gets into fights and decides to get out of the town.

Taira Ashihara goes to downtown Matsuyama. Whenever he spots someone who looks tough, he provokes them into a fight. Yuya Kitahara (Masaki Suda) becomes interested in Taira Ashihara. They go on a violent streak against people on the street. The two young men then steal a car. They head out of town with Nana (Nana Komatsu) who was in the car when they stole it. Meanwhile, younger brother Shota comes to Matsuyama to find Taira.

Whh Sep 21 2019 9:18 pm Yuya (masaki ) which a coward, he couldnt beat men, but instead he hit women...and they both decided to steal a car, and where nana (komatsu) took in place...that was when yuya (masaki) knew that they cant go back to he was before.. The three of them showed some amazing acting... Can't believe masaki suda and nana komatsu can act like that. Not to meantion yuya yagira also tough! Not that I like these kinds of movie.. But if you understand and interpret it well, why they become like that.. This movie is amazing.

Whh Sep 21 2019 9:14 pm Soo , I watched this movie 2 times now.. First one when in 2017 and now in 2019, why re-watch this because I want to see how masaki suda and nana komatsu act in this, because in 2017 I dont really know much about japanese actors and now that I'm looking forward for masaki suda and nana komatsu upcoming movie "tapestry" i feel I have to watch this also rather than watching drowning love (which was also great and amazing movie)..

mngl Jun 03 2018 10:03 am Okay I was supposed to ignore this movie bc eventho I LOVE Nana and Suda, I haven't seen good reviews about this movie. Alas, I watched Nana and Suda's movie together and I NEEDED to see hem onscreen together again so I caved in and I.... surprisingly liked the movie? Don't get me wrong! Yes, it has a very shallow plot; yes it has lots of violence and yes there are some scenes that might trigger some people BUT the bad reviews gave me enough warning for those so when I watched it, I was prepared for the movie to be horrible but it turned out to be a decent movie afterall.

Yuya did SO GOOD at his role. He nails every expressions (he doesn't really talk so that was very important) and really tells us what needs to be said in just a stare!! I'm definitely a fan now!! He's also really hot lol

Suda did great too! The character development was really nicely done, if I haven't seen some clips from the movie beforehand I wouldn't have expected that (I know it's written in the synopsis but I forget them really quickly bc i wanna be surprised while watching haha)! He really suit these kinds of deliquent, uncontrollable & one-tap-away-from-beating-you-up roles!

Nana!! What a bitch! She does it really well!! I wish we could've seen more of her (she does have a lot of scenes but i stan her so it can never be enough for me lol). Once again, chemistry between her and Suda was great (be warned though bc Suda's really abusive on this one).

I'd give it 6.5/10! Some long shots could've been shorter. Plot could've had more substance. Though, I interpret it as watching a boy spiral down towards destruction. It was enough for me to go on with the story. I actually likened this to "The World of Kanako" but, boy version! Though, I actually liked this better than TWOK.

Ps. Nijiro is here too! He did great as well! Him and Yuya coukd really pass as brothers visually (SPOILER i don't think they have any scenes together END OF SPOILER). I wish I could've seen more of him too.

Also, the ending was great, gave me goosebumps.

mizukisgirl May 10 2018 9:54 am Just watched this movie and I can't deny how hollow the plot is. Thanks to the actors they kept me watching all throughout the movie. It left a lot of questions in me but I personally like how 'it's just like that' the whole movie is.

Jina Mar 31 2018 2:50 am It always seems that Nana chan has always been used as a prop, I just feel this girl has so much talent... she can play a more substantial role... and please stop making her act as a school girl. I'm already fed up. P.S- CAST IS AWESOME... STORY OR NOT I'm GOING TO WATCH IT RELISH IT...

emma Dec 27 2016 10:08 am Masaki Suda! Nana Komatsu! Nijiro Murakami! Whoa such a whoaaa cast! But, the plot story seems a bit boring. Just my two cents. But anyway i think, i'll give a try.

filmbeats Oct 09 2016 9:50 pm A disappointing and pointless movie. A guy beats up a bunch of other guys and that's pretty much it. Some other jerks are involved too. If the movie has any commentary on Japanese society or any insight from all the violence, I didn't see it. You never even get a hint as to why Yuya Yagira's character can't stop fighting.

but yuya yagira is a sure thing. he has grown since the movie nobody knows and still can make his characters to be his own. suda masaki is also the same. and even nana komatsu and nijiro murakami