Daigo Kobayashi (Masahiro Motoki) is an aspiring cellist newly hired by a symphony in Tokyo. No sooner than Daigo’s first performance with the orchestra he receives the devastating news that the orchestra will be disbanded. Daigo made the fateful decision to mortgage his future by purchasing a cello that cost well over $100,000. Now he has to break the news to his faithful wife (Ryoko Hirosue). When she asks Daigo what his plans are now, he suggests they move back to his rural hometown Yamagata and start over again. Daigo’s wife smiles and agrees to follow him to Yamagata.

After the couple settles into their new home, Daigo looks for a job. He finds a listing in the newspaper advertising a position that requires little hours, no experience, and centers around helping out others on their journeys. Daigo assumes the position is for a travel agent, but when he arrives at the office, he realizes the job is for an “encoffineer” (Nokanshi) – similar to an embalmer in the U.S., but requires the encoffineer to work in front of the deceased in a ceremony steeped in tradition. The job of an “encoffineer” is not a popular one in Japan and people often look down on the job as dirty. Daigo tries to keep his job secret, but soon rumors spreads around the small town. When Daigo’s wife learns of his new job, she gives him the ultimatum to quit his job or she’ll leave him. 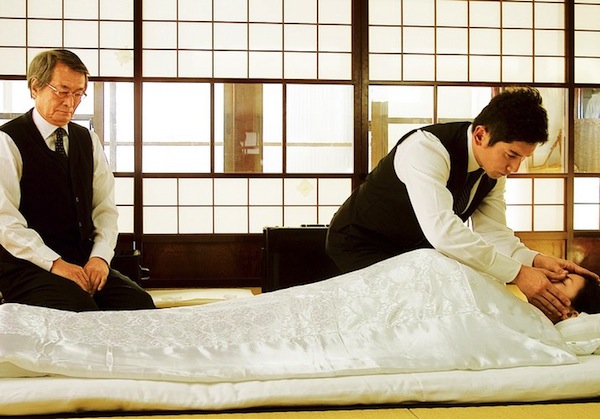 Mike Warr Feb 15 2014 8:25 am This film was amazing from the yearning of the modern day person to go back to where they came from and start over. Comical, Ironic Traditional, allegoric, the film has everything. Deeply moving, yet set against the backdrop of life, set in the scenery that is picturesque Japan. I am not Japanese, so I probably missed the nuances and other things a Japanese person would take for granted.

The film touched me on so many levels, and I do not want to give anything away. I did think the scene with the Salmon was an allegory for the trials and tribulations we all feel. I can not recommend this film highly enough.

Ozmo Dec 04 2013 10:16 pm Absolutely brilliant. A beautiful, touching and thought provoking film. Thoroughly deserving of all the accolades given. Glad I got to witness this masterpiece. Cried buckets, but enjoyed it immensely.

Nalyah Jun 16 2009 10:30 am “Departures” is a very touching drama. The main character is struggling throughout the movie with his relationships towards his dad, mother, wife and himself. While looking for his aim in life he found his place in a quite strange place. “Seeing off the dead” gave him a new insight on his life, marriage and parents. In the end he found his way back also to his childhood dream- cello, which he thought he had given up on. The scenes and acting were accompanied by wonderful music and this movie is gonna stay in my mind for long time.

Ki Mar 29 2009 9:31 pm “Departures” isn’t a heavy film per se, but it does eloquently examine the effects of death as it relates to those closest to the deceased. The film also respectfully showcases the art found in the encoffineer’s work. This is particularly important to the Japanese, as the movie portrays the common perception of these workers as people who are reviled. Masahiro Motoki always uses his hands as gracefully applying make-up on the deceased as he does when playing the cello. The message that comes out loud and clear is that the work performed by encoffineers are as artful as classical music. Departures also brings to light the importance of living life to the fullest as well as the importance of forgiveness. In one particularly moving scene, Daigo Kobayashi and his wife watches from the distance as a lady he has known all his life ends her journey, while a worker at the funeral home remarks that it feels like her journey is about to begin.

Performances all around are excellent, with nary a single shabby performance found in the movie. Masahiro Motoki obviously takes center stage and impresses throughout the movie (especially so when you compare his brilliant performance in “Departures” with his lifeless turn in last year’s “The Longest Night in Shanghai”). Ryoko Hirosue is cute as button in the film and the manner in which she always accepts Daigo’s ways until placing her placing foot firmly down when it comes to his new job works wonderfully to drive home the stigma carried by encoffineers. Tsutomu Yamazaki also brought out a lot of color, without ever saying a whole lot, in his supporting role as Daigo’s mentor and boss. At times, Tsutomu Yamazaki’s character felt like a continuation of his role from “Crying Out Love, in the Center of the World.”

Although it would have been so easy for “Departures” to lay on the sappiness, the picture always opts for the graceful route as it tells its powerful tale about life, death, and awakening. A large cross-generational group of viewers will likely find the movie inspirational.