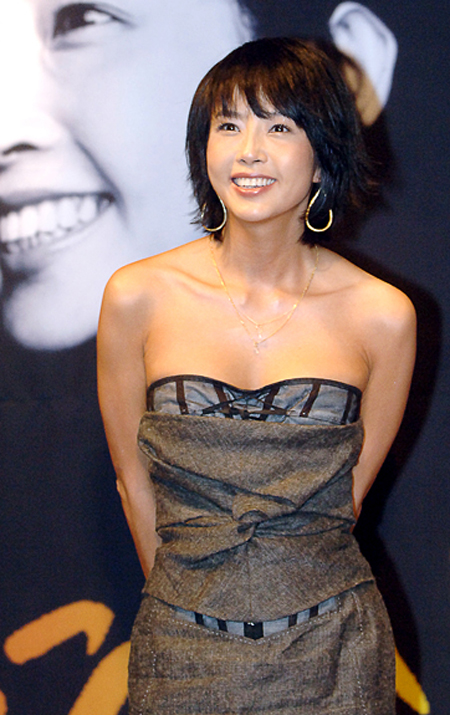 Born in 1968, she has continued to maintain popularity as an actress on both Korean TV and the Korean silver screen during the past 10 years. For a long time she has been considered the 'Queen of romantic comedy' among the Korean public. With 'Mayonnaise' she has attempted to change her cute girl-next-door image to play a housewife in her mid-30's.

On the morning of October 2, 2008 at 6:15 AM, Jin-shil Choi's mother found the actress dead by suicide. She was found in the bathroom with an elastic band around her neck tied to a shower stall. She did not leave a note. The actress married pro baseball player Cho Sung-min in 2000 but their marriage ended in a divorce in 2004. There were also unsubstantiated rumors in the previous weeks that she loaned $2,000,000 to actor Jae-hwan Ahn who killed himself in September, 2008. Choi is survived by two children.

Minerva Jan 03 2016 8:59 pm This sounds odd. How does someone commit suicide by hanging from a shower stall? Sounds like foul play. And perhaps her ex husband found out and was killed for it. Too well planned. It is human nature and a natural reaction for the body to try and survive. Perhaps she was strangled and they had to cover it up. She was doing well in the movies.No letter etc. 3 suicides, too coincidental. Who is doing their job in South Korea?

thornnnn Mar 21 2014 3:25 am What she has left behind will touch people for over a thousand years. At least she will be beautiful forever, frozen in time RIP.

nonsibi Jan 22 2013 8:25 pm The Korea Times, 8JAN2013. A bereaved family member of the late professional baseball player, Cho Sung-min, carries his photo during a funeral ceremony at Korea University Anam Hospital in Seoul, Tuesday, 8 Jan 2013. Cho, the ex-husband of the late actress Choi Jin-sil, was found dead on Sunday after committing suicide, four years after his former wife killed herself.

elvri Dec 27 2012 10:41 pm I Know her when I saw Kdrama Last Scandal. I really happy waching this drama. I am sad and unbelievable when i know she suicide. She is Good actress..good Performence...and i sad what happened to her..If she have someone to help her... just hope.

DrAkoni Apr 25 2011 10:58 pm This is so sad, I mean she was a beautiful woman that had so much to live for, I feel the e shackles of Asian society and the world of entertainment got to her and drove her to the breaking point

Mariz Feb 21 2011 8:49 am thank you for this oppurtunity that have given to me to share my opinion and my concern to the artist that once touch my life.

Mariz Feb 21 2011 8:48 am I like Choi Jin-shil, specially when i've seen the TV Drama War of the Roses. I was shocked and I really don't believe what happened to her. I found myself crying while watching the news. All I can say is thank you for the drama you've shared with us. I believe you are now in the good hands of our dear God. A lot of people will miss you

jane Oct 14 2010 9:45 am Hi there. I can't just leave this site without posting my comment about Choi Jin Shil. Honestly, I didn't know her until I saw Last Scandal, which is one of my favorite Kdramas of all time! I got totally hooked with the drama and of course with CJS excellent performance. At first I thought she was familiar, I know I've seen her somewhere but I just couldn't recall. So, I tried to get to know her better by making a research of her biography on the net. Unfortunately I was greatly devastated to know that she's actually dead and she'd committed suicide :'(( That's why she's so familiar coz I've seen her in the news before and saw her on TV once in Rosy Life! I thought my admiration of her would stop there knowing that she's gone, but it didn't! I even loved her more and I started collecting and viewing her other works- Star in My Heart, Since We Met and Holiday in Seoul and looking forward to see the others.

She's truly Korea's Actress- beautiful, talented, versatile, and exceptional. Her story is one of a kind, a true to life Cinderella tale. But unlike Cinderella, sadly there's no happy ending for her.... Yes, she may have ended tragically but may be it was her destiny. Everything happened for a reason and is always God's will. I am sad that she's gone, she could have still made a lot of beautiful soaps and movies... Wherever she is right now, may she rest in peace. May the Korean society realize what her death symbolizes. It's not just her alleged depression but there's more behind her death.