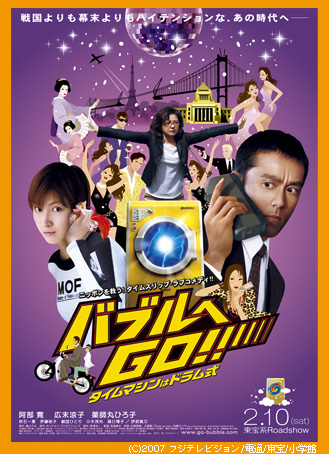 Mayumi Tanaka (Ryoko Hirosue) is a simple girl, who works at a hostess bar to pay off her ex-boyfriend's debts. She then attends the funeral for her estranged mother (Hiroko Yakushimaru), even though her mother's body was never found. Reports stated that her mother fell off a cliff and is now presumed dead.

When Mayumi arrives home from the funeral she sees a stranger waiting for her in front of her house. The man introduces himself as Isao Shimokawaji (Hiroshi Abe), who works for the Ministry of Finance. Isao then tells Mayumi some shocking news. Her mother is not dead and, in fact, went back in time to the year 1990, but cannot be located anymore. Her mother went back in time to prevent the enactment of a certain legislation that would burst the booming economic bubble of that time. Furthermore, Japan now has only two years left before its economy will collapse from its currents debts. The only way to save Japan and her mother is for Mayumi to travel back in time to find her mother and finish her mother's mission. At first Mayumi is reluctant to go, she never got along with her mother anyways, but when Isao informs her all of her debts would disappear she agrees immediately. Now Mayumi is set to travel back to the year 1990 in her mother's ... washing machine!