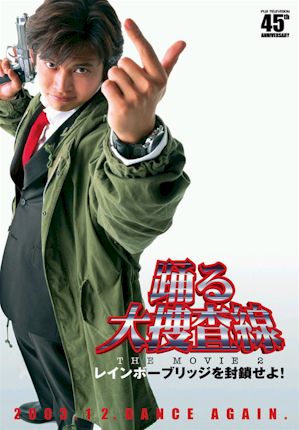 Tokyo, the bayside borough of Odaiba: once a sleepy part of the city on empty, reclaimed land, it's now a bustling destination for hipsters and tourists alike. The local police precinct, long derided as a backwater, is inundated with missing kids, traffic congestion and all the details of community policing.

One day, a report of something suspicious comes in from near the famed "Rainbow Bridge" (connecting the reclaimed island of Odaiba to Tokyo itself). Bored with his everyday neighborhood duties and eager to get his teeth into a serious crime, Sergeant Shunsaku Aoshima (Yuji Oda) races over to the scene. He is met by a particularly gruesome sight; a dead body weirdly bound up and long dead.

However his involvement is short-lived. A unit from Metropolitan Police Headquarters barges in to assume responsibility for the investigation. His precinct is relegated to the role of playing host to senior officers, Superintendent Shinji Muroi (Toshiro Yanagiba) and his sidekick, Kentaro Shinjo (Toshio Kakei). Joining these two is Senior Superintendent, Hiromi Okita, (Miki Maya) a woman chosen to oversee the operation to alter the all-male image of the police department. With much expectation placed upon her, she's in no mood to make friends. Treating the local precinct as little more than her flunkeys, even alienating Muroi with her abusive treatment, she runs the investigation with a tough hand.

At this point in the proceedings, as if mocking the lack of unity in the police, a second body turns up. Whilst continuing with their normal duties, Aoshima and his partner Sumire Onda (Eri Fukatsu), are entrusted with protecting the only witness to the crime, Ritsuko Edo (Manami Konishi).

They escort her to a party where she is to be bait to tempt the criminals out into the open. Meanwhile fellow detective, Shigeru Koike (Kotaro Koizumi) monitors events on a secret and controversial, new surveillance system known as "CARAS". Just as the criminals approach the witness, by coincidence both Aoshima and Onda see suspects they've been pursuing in separate cases. However orders from Superintendent Okita, forbid them from giving chase and their suspects get away.

When Aoshima & Onda complain to Okita, they are infuriated when she dismisses their local investigations as completely insignificant.

Meanwhile two more members join the investigation in response to the suspect's phone calls. On one hand is Masayoshi Mashita (Yusuke SantaMaria) from Police HQ, fresh from a crisis negotiation course in Los Angeles, on the other is Heihachiro Waku (Chosuke Ikariya), a grizzled beat cop and faithful consultant of the Bayside precinct. These guys produce a suspect profile which prompts the investigation HQ to post a stakeout of public payphones.

No sooner is this set up than a call comes in from the suspect. Superintendent Muroi, manning the "CARAS" unit, spots a suspicious-looking man. He calls in a detective of the local precinct, Yukino Kashiwagi (Miki Mizuno) who happens to be in the area. However, all he can do is watch the monitors in horror as the suspect sneaks up behind her with a knife...!