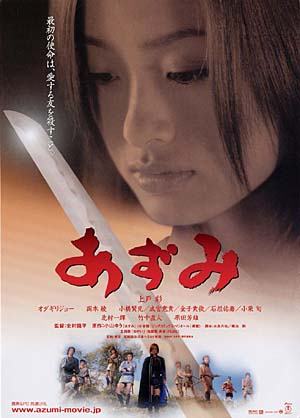 Orphan Azumi (Aya Ueto) is brought up in war-torn feudal Japan as an assassin. She is trained by Master G along with 10 of her fellow orphaned male assassins to kill two rival warlords - this is for the purpose of bringing peace to the nation. After completing their training, Master G has one final test for the 10 assasins. The 10 assasins are to pair off with each other and have one final battle to the death, leaving only 5 assassins. With their mission set, Azumi and the other surviving assassins journey out to decapitate the rival warlords.

Ki Feb 01 2011 9:42 pm Obviously this movie was not inspired by any of Akira Kurosawa’s films. The movie comes from a popular Japanese manga and seems to have been inspired by the fast cut-and-paste action sequences favored by the A.D.D./MTV generation. One complaint about the movie would be the aweful soundtrack used in the film. I did not mind placing contemporary music in a film set in the 1800’s, but I did mind placing bad contemporary music in a film set in the 1800’s (1980s type of heavy metal music played in a sterile muzak form). Besides that, I enjoyed the movie for what it was, alot of mayhem caused by a J-pop singer in a mini skirt and her sword.

Flix Feb 07 2010 5:57 am Azumi was an entertaining movie; with a touch of artistic humanism

Mister JONES Nov 26 2009 6:12 pm One of my favorite chanbara movies. I can watch this one quite a few times. A great balance of story and action and cuteness.

Nalyah Jun 14 2009 2:20 pm Actually I was disappointed by this movie. I enjoy marital arts and fantasy attachments, but this one was too much on the brutal side and less on the ‘plot side’ as for my taste. I also agree about the music- it was really nice, but didn’t really fit this particular movie.