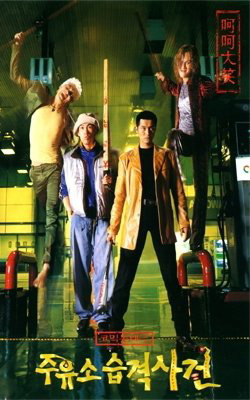 Four guys with nothing better to do decide to rob a gas station. When they find out there isn't as much money as they expected, they lock up the employees and take over to make more money. They don't know how to run the gas pumps, and when the customers complain, the guys take them hostage. Everything is more or less under a chaotic kind of control, until they order Chinese food and make the mistake of harassing the delivery boy. He rounds up a bunch of other delivery boys to attack the gas station. Another confrontation with a high school gang and the local mafia provokes a bigger fight. Finally the police arrive for the final showdown.

Syeda Nov 26 2017 1:17 am This movie is truly amazing. I thought it would be crappy because it’s low budget but BOY was I wrong. Attack the Gas Station is a classic Korean comedy. I love it so much. All the actors and actresses made me laugh