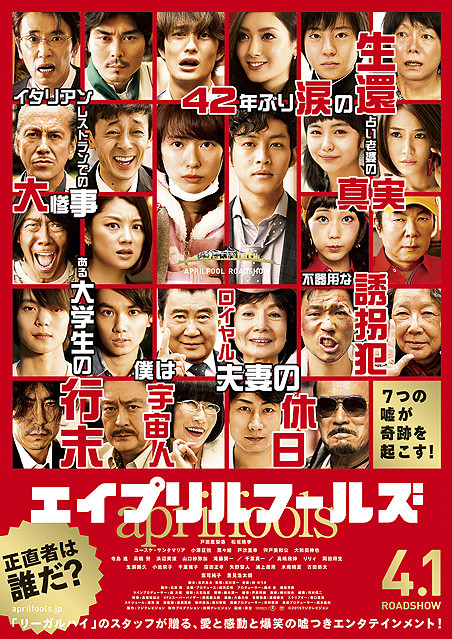 Ayumi Nitta (Erika Toda) suffers from anthropophobia (extreme shyness & fear of people). She works as a janitor at a hospital. One evening, she has an one night stand with surgeon Wataru Makino (Tori Matsuzaka) who is addicted to sex. Ayumi later realizes she is now pregnant because of that one night stand. When she tells Wataru that she is pregnant, Wataru believes she is a making a bad April Fools joke. Wataru Makino then takes flight attendant Reiko (Nanao) out to an Italian restaurant. He doesn't know that Ayumi Nitta is also going to the same restaurant.

Linh Le Apr 01 2018 1:13 am It's really a good movie! I watch this movie on 1st April and don't regret for watching it. There is rarely a 2 hours movie that can put a lot of stories inside without discrete plot. April Fools put a lot of different stories (some are connected) inside and fulfill each of them completely. Btw, the main story is REALLY great but I want it to end with a better life of two main character (like he's really be a good doctor and they have a happy family). I'm really touched by the stories of the student girl and the old couple and laughed by the gay couple and student boy stories :)) I also want to know what the student boy will choose after all and be impressed by the scene of helping the main girl give birth :)) This is a full genre movie :)) Watch it and u will not regret your decision. Believe me :)

zardneurosis Nov 14 2017 6:19 am who is playing as yoshida? the girl who kissed by spaceman

Blank Jun 24 2016 8:36 pm OMG THIS IS FCKING HILARIOUS! yet soo touchingggg T_T @erosama if im not mistaken the one who act as girl being kiss by spaceman named Karin Ono.

Hannah Apr 05 2016 8:47 am this movie is surely interesting! so random!! and funny!! XD i laugh big time at the gay part!! lmao XD yet it's touching.. never thought i cry while watching.. i cried at the father-daughter moment.. so touching.. :') as expected from japanese production, always feels with meaningful and hidden messages.. nice..

may Mar 01 2016 6:27 am This film was better than I expected. I love how each of the stories or characters are interwoven. The gay couple was actually the most hilarious part of this whole film. If you're in the mood for a touching movie, this is it.

Summer Dec 27 2015 2:14 pm Kubota Masataka is playing a gay character?!? When is he going to get his own romance drama or movie and star as the main guy who gets the girl?!? He deserves roles with higher profiles than this nonsense.

the movie isn't really revolving around the main two characters (even though they act as a pivot to the rest of the stories) which was something i didn't expect. titled as april fools, the characters in the movie learnt and grew from the lies they have made in the past and on the actual day. the movie initially unravels itself like a typical japanese movie; crazy and somewhat nonsensical. you might get a little lost about wtf's happening in the beginning but towards to middle you'll start to grasp the plot as more things unfold. the individual stories are meaningful in their own ways and some actually touched my heart. and i wouldn;t deny that Tori Matsuzaka was gorgeous in the movie ;-) from the start till the end

but i must say the thing that shock me the most was Kubota's story LOL no one told me there was a small bl story there okay if i knew it i would have watched the movie immediately after it came out hahahhahaha!!!!!! and okada's scenes reminded me of yakusuke in kyoko okitegami XDDD

Naja Aug 03 2015 1:24 am This movie looks AMAZING!!!! This is such a top billed cast and the plot itself is unbelievably hilarious. It has been months since it came out and I have been desperately looking for a way to watch this movie. If anyone knows a place I can go to watch this please leave a comment. IT DOESN'T EVEN NEED TO BE ENG SUB lol I just reeeeeealy want to watch this movie x

Rai Apr 13 2015 11:36 pm too bad Masato Sakai and Yui Aragaki didn't join this movie, it's gonna be Legal High all star, most of cast member in here, even Katsuhisa Namase as Miki Sensei is here too, nevertheless definitely become my number one watch list