After the Rain (live-action) 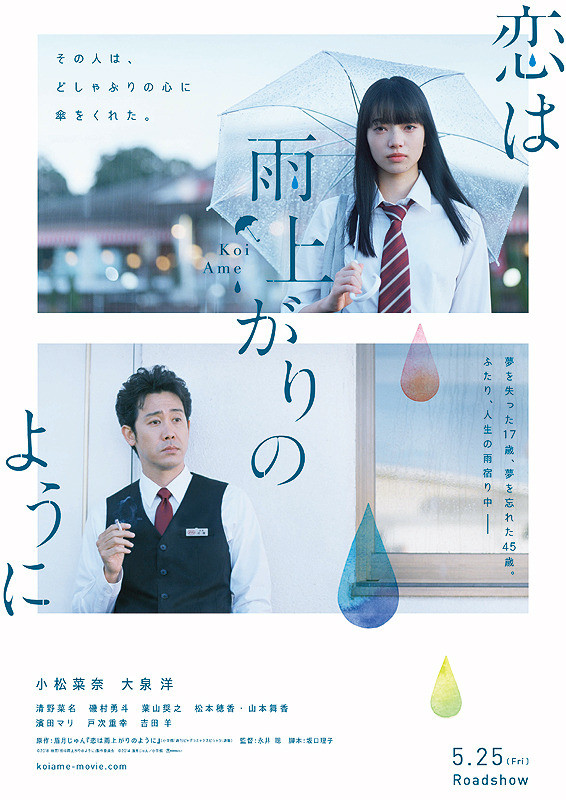 Akira Tachibana (Nana Komatsu) is a 17-year-old high school student. She was once a promising athlete, but an injury has prevented her from taking part in track and field. One day, Akira Tachibana goes to a family restaurant and the manager talks to her in a tender voice. This makes Akira Tachibana begin working part-time at the restaurant. The manager is 45-year-old Masami Kondo (Yo Oizumi) and he is divorced with a child. Akira Tachibana falls in love with him.

Lavoro Jul 05 2019 6:46 pm Guys? can you tell me the music where Akira starts to practice again? Thankss

Dale Mar 12 2019 7:43 am You are so sexy in After The Rain, Nana. I am totally guessing the director made the other girls shorthaired so you stand out, but it wasn't necessary. You looked perfect all on your own.

Joaquin Feb 21 2019 7:29 pm Beautiful legs, beautiful girl and she loved who she loved and not who she was supposed to love according to the 'rules'

filmbeats Feb 11 2019 8:46 pm I went into this movie without any expectations and only decided to watch it based on the two main leads whom I had both seen in other films I found interesting. I wasn't even aware of how large the age gap was or premise at first. The characters are well cast and there's a good amount of humor. The setup is definitely wish fulfillment but ultimately it's about two characters who help each other directly or indirectly rekindle their lost passions. In spite of the age gap, the interactions between the leads is funny and touching without feeling weird or inappropriate.

BB Mar 01 2018 10:40 pm Just saw some photos of the movie. I can feel it's gonna be amazing. *clap clap* for the live action characters. I really think they are perfect for the roles. Ganbatte, Nana-chan!!!

No-Name Dec 16 2017 2:13 pm "Society will never accept this kind of relationship" - Majority people will say it. Read manga first before watch the movie ^_^