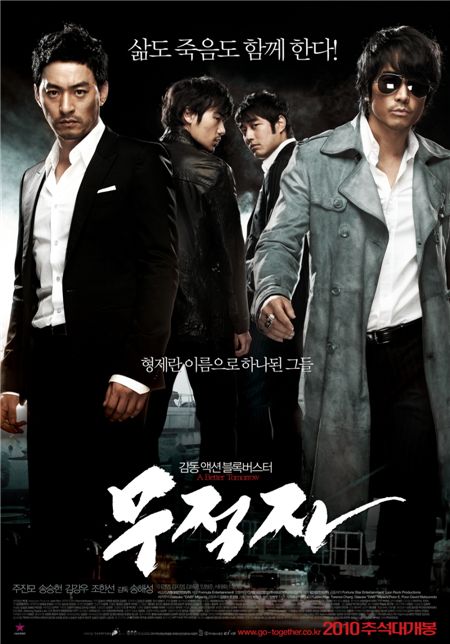 Kim Hyuk (Joo Jin-Mo) lives the fast life as a high ranking mobster in the port city of Busan, South Korea. His closet friend is fellow mobster Lee Young-Choon (Song Seung-Heon). Even though Kim Hyuk seems to be on top of the world, he is haunted by the memory of leaving behind his younger brother Kim Chul (Kim Kang-Woo) and mother as they attempted to flee into South Korea from North Korea. Kim Hyuk's mother was beaten to death and Kim Chul imprisoned after they were caught by North Korean authorities.

Kim Hyuk then travels to Thailand with new gang recruit Jung Tae-Min (Jo Han-Sun) for a meeting with Thai gangsters. The meeting turns out to be a set-up, planned in part by Jung Tae-Min. Kim Hyuk is able to shoot his way out the meeting, but he is later caught by the Thai police and imprisoned. When good friend Lee Young-Choon hears of what happened to Kim Hyuk in Thailand, he goes to the Thai gang's holdout in Pusan to kill their boss. During the shootout Jung Tae-Min is shot in the leg.

Three years later, Kim Hyuk is finallly released from prison and travels back to Busan. He finds his close friend Lee Young-Choon washing cars now and has a limp leg. Jung Tae-Min, the man that betrayed him, has climbed up the mob ranks and is now a feared crime boss. Furthermore, Kim Hyuk's younger brother Kim Chul has arrived in Busan and works for the Busan Police Department. Meanwhile, Kim Chul keeps close tabs on Jung Tae-Min as he attempts to take down their gang.

When Jung Tae-Min attempts to take out Kim Hyuk's younger brother, Kim Hyuk throws himself back into the gang world to exact revenge. 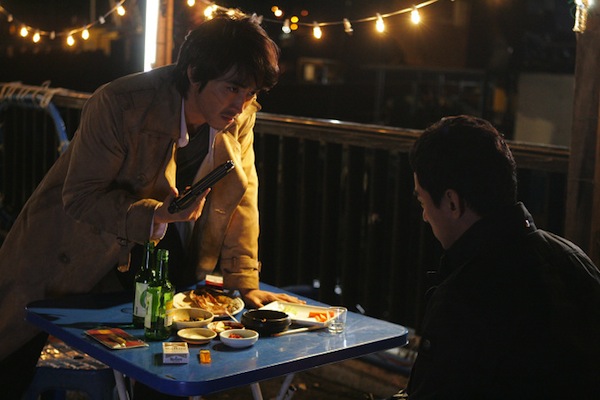 Kat Jun 18 2013 8:02 pm i saw the dvd at my local store for 6 dollars. i saw the handsome korean men, and the ni relaized i recognized the company!

Funny how the movie gods work. On a typical weekend September afternoon here in Korea, I decided to go for a walk in the downtown area of Daegu. On a whim, I decided to catch a screening of “A Better Tomorrow” (the remake of the Hong Kong film by John Woo). Why I’m not exactly sure. I’ve never been a big fan of pure action films or John Woo films in general, but like that odd American commercial once stated “… sometimes you feel like a nut and sometimes you don’t”.

While buying my ticket for “A Better Tomorrow,” I listened to the cashier tell me that two of the main actors, Joo Jin-Mo & Kim Kang-Woo, would appear prior to the screening. My Korean is far from perfect so I asked her to repeat what she said and, sure enough, she said exactly what I heard the first time. I replied in a controlled tone, “oh really? … that’s neat,” but thought in my head “holy shit! Joo Jin-Moo from 200 Pound Beauty! Kim Kang-Woo from Marine Boy!” Funny how the opportunity to see a celebrity can make anyone into an instant fan boy. Without blinking, I dropped my 7,000 – 8,000 Wons for the movie ticket and went into the cinema.

Along the way into the cinema I noticed a lot of woman. A whole lot of women. I did recall thinking about that time that Joo Jin-Mo and Kim Kang-Woo must be two really lucky guys. While glancing over the hallway I figured the ratio of women and men was about 8 to 1 in favor of the women.

Arriving in my assigned seat I couldn’t help to notice the excited women in the rows in front of me and that got me excited as well. What can I say besides it was infectious. There were women with signs four seats long stating “Joo Jin-Mo” in Korean and another women on the far left holding a LED lit sign with Joo Jin-Moo name’s as well. Neato I thought.

After waiting 10 minutes past the scheduled start time, Joo Jin-Mo and Kim Kang-Woo finally walked into the cinema to a whole lot of squeals and flash lights going off. Joo Jin-Mo in his black wraparound sunglasses looked like a skinnier version of Bono from U2 & Kim Kang-Woo looked way more muscular than expected. Unfortunately, because of their tardiness, the actors spoke for no more than a few minutes. They did give out the obligatory “thank you” and “hope you the enjoy the film” kind of things. The actors then picked up a few autographed ballons (at least they looked like balloons to me) and tossed them into the audience. I actually enjoyed watching the giddy reactions of the ahjumma’s even more than their appearance.

Then it was time for “A Better Tomorrow”.

How was the movie you may ask? Well, its not a classic in any sense of the word and you do wonder at times exactly why they made a remake. Honestly, the first half of the film sucked. At times it felt like watching kids play make believe and imitate their favorite actors. Strangely enough, as the story progressed (specifically when Joo Jin-Moo returns from Thailand) the movie picked up steam and started to get compelling. Things like anticipation, excitement & cool action sequences finally started to appear. Even the performances by the actors seemed to improve, like they were now comfortable in their roles and not so worried about imitating others.

I can’t say “A Better Tomorrow” is a killer action film like this year’s “The Man From Nowhere” (check that out if you get the chance!), but the movie turned out to be better than the train wreck the first half of the movie led me to believe the movie would become. I’m still not sure why they remade John Woo’s “A Better Tomorrow,” but hell, I got to see Joo Jin-Mo and Kim Kang-Woo in person because of it. Maybe the next time I go for a walk in the downtown area of Daegu I can happen across an appearance by Lee Na-Young, Bae Du-Na, or Kong Hyo-Jin?