10 Promises To My Dog 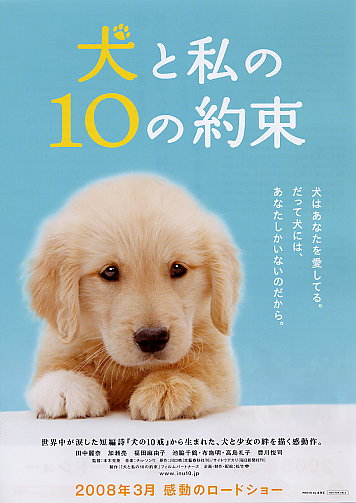 One day a puppy comes to the house of Akari, who has just turned twelve, and was trying hard to act strong after her mother suddenly fell ill. She immediately falls in love with the puppy and names it "Socks" after the paws which looked like they had white socks on. Akari was together with Socks day and night. However, as Akari grows up, her feelings and interest moves away from Socks. Year by year, their distance grows, which also leads to her physical distance as she moves to a far off city, and must leave Socks behind to a childhood friend.One day Akari remembers the 10 promises that she had made with Socks and her deceased mother...

filmbeats Aug 03 2015 2:00 pm One of my favorite films and definitely a tearjerker for dog lovers.

Ryaven Sep 09 2010 11:36 pm This movie is amazing and I couldn't stop crying through it. Heartbreak after heartbreak! (I think it was a Korean melo-drama disguised as a Japanese film, lol.) at least it ended bittersweet :)

Ki Dec 01 2008 11:06 am If there is another country that loves dogs more than Japan I certainly haven’t come across it. The amount of love Japanese dog owners have for their furry canine friends surpasses anything I have seen stateside . As an example, the next time you are in Tokyo, head on over to the artificial island named Odaiba and check out the Aqua City shopping center. You’ll find there an exact replica of the Statue of Liberty standing behind the shopping center. But, what’s even more surreal than finding a miniature Statue of Liberty placed in the back of a modern Japanese shopping mall (just a stone’s throw away from the equally insane Fuji TV building) and situated on a man made island, is none other than the dog park behind Aqua City. You’ll find couples, single individuals, old & young people, all walking their dogs in this area, with over half of them pushing their dogs around in baby carriages!

And with this type of love for dogs, we get the next major Japanese motion picture about a dog, "10 Promises to My Dog" (just in the last couple of years alone Japan has produced such canine centric films as "All About My Dog" "Berna," "Quill," "Inogue," and "A Tale of Mari and Three Puppies"). Before you dismiss this movie as a small niche film, just remember that the movie was produced by Shochiku, directed by Katsuhide Motoki (Gegege no Kitaro films, Free and & Easy, Drugstore Girl) and such recognizable A-list Japanese actors as Rena Tanaka, Mayuko Fukada, Etsushi Toyokawa, Ryo Kase, and Chizuru Ikewaki. The movie itself is based on a novel by Hare Kawaguchi, which covers approximately 10 years in the life of Akari Saito, her father Yuichi Saito, and their faithful dog Socks.

Young 12-year old Akari (Mayuko Fukuda) finds a dog in her backyard one afternoon. She’s thrilled to have the dog and rushes to the hospital to tell her sick mother the good news. In actuality, Akari’s mother placed the dog there so Akari would have someone else in their home. Akari’s mother then brings about 10 promises Akari should make to her new found pet.

A few months later, Akari’s mom passes away and her father Dr. Yuichi Saito (Etsushi Toyokawa) gets transferred to another hospital in another city. Unfortunately, Socks isn’t allowed to move with them (they will stay in a hospital dormitory). Akari leaves her dog with best friend Susumu Hoshi (Shota Sato). A short while later, Susumu finds out that he has been accepted to a musical school overseas and must leave Socks behind.

7 years later, Akari (Rena Tanaka) is now on the doorsteps of womanhood. She has Socks as her faithful companion and soon finds herself with another longtime friend. Susumu (Ryo Kase) has returned to Japan as a successful musician. But, as Akari tries to venture out into the adult world, she finds Socks to be more of a hindrance.

“10 Promises to My Dog” is an awfully sweet movie that will appeal to animal lovers who drive their cars happily with a Hello Kitty steering wheel cover and replaces their cellphone charms bi-weekly. The film is set in a near fantasy world of nice people and nice things (something like “Always - Sunset on Third Street” set in the present day), will make you one happy camper if that kind of thing fits your temperament. Problems arise if you don’t fall within these narrow categories.

Rena Tanaka, who stars as the adult Akari, is a popular actress that has never been able to transfer her natural charisma into the characters she has played. Her performance in “10 Promises to My Dog” didn’t change this impression and, in fact, solidified my lukewarm impressions of her as an actress. As an example, when Socks lays on his death bed, Rena Tanaka unleashes this combination of whiny high pitched squeals, potty expressions, dry tears, and a “I think I got a summer cold” type of sniffing that made me want to hurl vomit at the screen. It was an incredibly painful moment to endure. Meanwhile, her younger counterpart, Mayuko Fukudo, was more like a human Prozac pill. The amount of joy that this girl unleashed on screen was something to be seen. Always so cute, with her eyes nearly shut closed from smiling so hard, she made the puppy seem rather downright pedestrian.

Meanwhile the 7 year gap between the first half’s young Akari and the second half’s adult Akari didn’t work as well as expected. Surprisingly, a lot of the blame can be place upon Ryo Kase (Huh? your asking yourself “did I read that right?”). Yup, this is a rare case where Ryo Kase was miscast for a film and actually hinders the film. The main problem being that Ryo Kase is 34 years old, but he’s asked to play a 19 year old. Maybe some won’t notice this age disparity, but for me, it was an obvious distraction. Storywise, the movie sputters forward with episodic moments that are predictable to say the least. Often, the bright retro looking cinematography made the flat story feel livelier than what it actually was, but whenever the film hit a melodramatic peak the nice visuals couldn’t hide the lack of originality found in the script.

5 Promises to my Dog:

1.) I won't ever make you watch another Rene Tanaka film again.

4.) I won't make you watch another film with Etsushi Toyokawa wearing so much tanning cream again.

5.) I will let you watch as many Mayuko Fukudo films as possible.

Besides, they didn't copy your commandments word-per-word. The sense of the promises changed in the movie.

So I guess, the film makers thought they weren't stealing anything.

If you do plan to contact them, please don't "attack" them with a lawsuit. Ask them nicely at first, to clear the misunderstanding.

Pheenyphret Nov 13 2008 11:21 am Well Stan, if you really are the Stan who wrote these commandments and not some guy pretending to be him, the film did mention that it was inspired by the Ten Commandments of Dog Ownership. Look for it in the ending credits.

Amitava Oct 24 2008 4:55 am Really Really shocked, how come this producer could neglect the actual life line of his picture, I would strongly focus this in my pet blog, and good wishes for Stan for his "10 commandments" it is highly appreciated.

Stan Rawlinson Oct 02 2008 4:41 am I wrote the ten comandments in the first place and this film has stolen them and not even given me credit for it.