Penguins in the Sky-Asahiyama Zoo 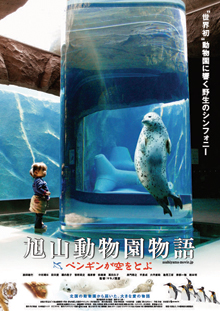 Asahiyama Zoo in Hokkaido, is the northernmost zoo in Japan. The unpopular zoo welcomes a new zoo keeper, young Yoshida (Yasuhi Nakamura), who has more affection for insects than people after years of being bullied at school when he was young. Yoshida soon realizes that Asahiyama Zoo is facing a financial crisis and the zoo director Takizawa (Toshiyuki Nishida) has been doing everything in his power to save the zoo from closing down.

Moved by Takizawa’s passion, Yoshida and other zoo keepers came to share the zoo director’s belief that one’s dreams can come true, and together they tackle this seemingly impossible task of revitalizing Asahiyama. A breakthrough arrives in the form of “Behavioral Exhibition,” a method that is pioneered by Ashiyama’s zoo keepers and which eventually makes the zoo renowned throughout the world.

Angeles Mendoza Feb 11 2010 11:36 am One of best Japanese movies I have watched. It is worth watching by evereyone, especially people working on environmental or conservation issues. It is great to see how the ingenuity and commitment of the zoo's staff challenges the political and economic interests that want to close the zoo forever. I loved how the movie shows the connection between animals and humans.

sanaz Jan 15 2010 11:04 pm It was a real movie..I enjoyed the foundation and the spirits....I have translated the film into persian language and that was a real pleasure for me..now I beleive that pinguins really can fly high in the sky...well done everyone