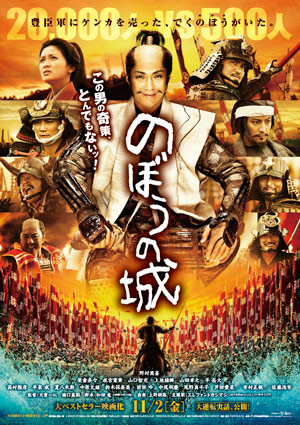 In the year 1590, powerful daimyo Toyotomi Hideyoshi nears his plan to unify all of Japan, but he comes across a floating fortress known as Oshi Castle. Narita Nagachika, in charge of defending the castle, must use his army of 500 men to combat Toyotomi Hideyoshi's army of 20,000. Graham Hardy Sep 20 2013 8:29 am Please would someone tell me if I can get the bluray *region free or on region 2 that has UK (English subtiles) my japanese is rusty to say the least and I would like to see other Japanese films. So this was suggested to me as right up my street

Jinni Mabalot Mar 28 2013 10:42 pm Saw this film on a flight coming back from an Asian vacation. I was mesmerized! I laughed; I cried. There was not a single frame that I would change. The cinematography was awesome, particularly in close-ups of the battle scenes where the castle is being attacked with minimal blood and gore for this genre. Based somewhat on a true story, it gave a face to the names of actual historical figures from the era. The plot had a few twists and turns not usually found in your run-of-the-mill samurai films. In summation, a totally worthwhile and enjoyable flick!