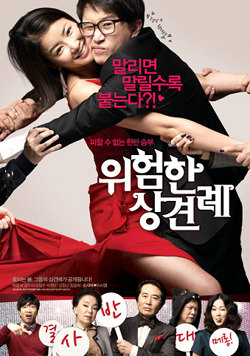 The couple then comes up with an idea. Hyun-Joon will go to Da-Hong's home and tell a "small" white lie about his background - that he is a native of Seoul. Now, Hyun-Joon must lose his regional Jeolla-do dialect and also be able to lie to his possible future in-laws.

KPips Dec 06 2013 6:10 pm To someone else's comment. The main actors are only 3 years apart. Maybe due to face "enhancements" they look older than their actual age when they're trying to look younger or better. Whatever the matter. Don't get hung up on age difference and focus on the story, plot, scenery, acting skills, directing skills and overall outcome of the film and dramas you're watching.

Up to this point the movie feels like there will be more laughter and romance blooming in the film. Unfortunately the way the movie resolves all the problems was just weak and half-assed. Some of the twists were just downright stupid (especially the gay guy coming out of nowhere).

For people unfamiliar with Korean history I guess the subject matter of Jeolla province versus Busan area may seem confusing. There has been traditionally some forms of prejudices against people from the Jeolla province, with sterotypes of people from that area being "dishonest" and such stemming from the 1950's. I guess these types of stereotypes are similar to perceptions of the deep south in the U.S. It will be interesting to see how well the eventual English subtitles for this movie on a future DVD release will be able to express the sentiments found in the movie.

Anyways, the movie turned out to be my least favorite movie from this year so far, even though the first 1/3rd was promising and provided moderate amounts of laughter. In retrospect it just felt the screenwriters came up with a good scenario but came up with continuous brainfarts on how to resolve the scenario.