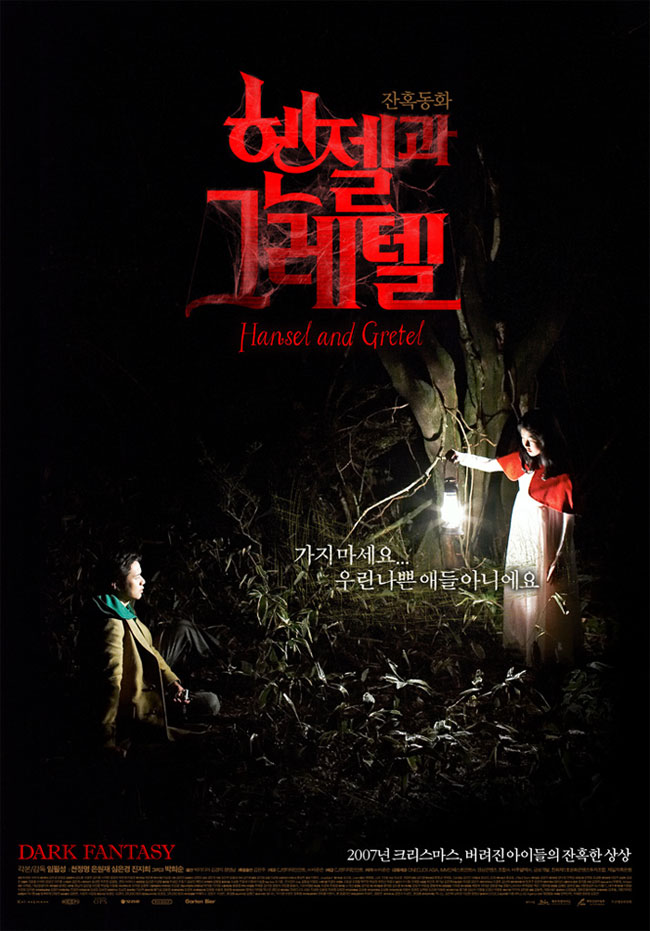 A young man gets lost in the woods but finds himself in a beautiful house with three adorable children. With a warm fireplace and plenty to eat, the place seems too perfect to be true ― and impossible to exit. Charsti May 26 2019 5:32 pm I remember watching this movie years agoo, really scared me and to this day this movie still sticks with me..

what? Sep 14 2010 11:17 pm I watched this movie over and over but I never get bored. Plus, Sim Eun-kyeong became my favorite actress because of this movie...too bad the boy who played Man-bok never showed up again in any dramas/movies..

Ki Feb 11 2009 4:20 am Off the beaten and found somewhere deep within a forest lies Pil-Sung Yim’s (Antartic Journal) latest film “Hansel & Gretel.” The movie is presented as a “horror” film and has a few scenes identified with that genre, but overall seems more suited for the thriller genre. The strongest aspects about the film are the visuals, which are incredibly vivid & bright, and contrasted even more by the film’s dark story..

hanselandgretel-main3.jpgIn Pil-Sung Yim’s “Hansel & Gretel,” Eun-soo Lee (Jeong-myeong Cheon) argues with his girlfriend on his cellphone, while driving his car through a wooded highway. He suddenly looses control and flips his car over a guardrail. When Eun-soo regains consciousness he finds himself in the forest, with a 12 year old girl named Yeong-hee (Eun-Kyeong Shim) standing over him. It’s nighttime now and Yeong-hee guides Eun-soo back to her home.

Yeong-hee’s house is situated deep in the forest, built in a lavish children’s book manner. She has a younger sister named Jeong-sun and an older brother named Man-bok. Her parents greet Eun-soo and invite him to stay the night.

The next day Eun-soo tries to find his way back. Because of the maze-like forest surrounding Yeong-hee’s home, he always ends up back where he started. Making things more difficult for Eun-soo is that there isn’t a working phone line in the house nor can Eun-soo pick up reception on his cellphone.

On the second day, Eun-soo wakes up to find the children crying. There’s a note left by their parents, explaining they have to leave on urgent matters and asks if Eun-soo could watch over the kids temporarily. Meanwhile, Eun-soo discovers that the children are not your normal set of kids and there may have been other visitors at their home who never made it out of the forest.

And thus one of the more uniquely premised horror/thriller “Hansel & Gretel” unfolds right in front of your eyes. Production value is particularly strong. “Hansel & Gretel” is one of the first films produced by Barunson Film Division, the company responsible for “The Good, the Bad, and the Weird” and Joon-ho Bong’s upcoming pic “Mother“. You can tell a lot of attention has been placed upon the set design. Inspired by the Technicolor feel of children’s storybooks, “Hansel & Gretel” offers a surreal look that’s as appealing as it can be disturbing.

Unlike those visuals, the storyline isn’t nearly as inventive. There’s been a lot of Korean films that have covered similar ground involving orphans and child abuse. Pil-Sung Yim tries to differentiates “Hansel & Gretel” by wrapping the colorful children’s storybook like visuals around the story’s dark subject matter. This is only partially successful. More substance within its story, perhaps workable allegories between the house, forest, and the outside world, would have given the audience more credence to accept the-dark-story-wrapped-around-the-bright-backdrop as something other than a gimmick. When the disturbing history of the children’s early lives are revealed in the second half, the movie fails to convince you that this is something more than a cheap device to give substance to the movie.

The cast itself was largely uneven. The three kids shined brightest by all giving strong performances. Won-jae Eun, who played older brother Man-bok, looked mean and scary at just the right times. Eun-kyeong Shim, who played Young-hee Kim & looked like a 12 year old version of Yo-won Lee, played the most intricate character in the film with natural grace. Ji-hui Jin, who played the youngest sibling, was able to convey the perfect mixture of cuteness and spookiness required for her part. Meanwhile, Jeong-myeong Cheon looked completely lost and out of place as the movie’s main character Eun-soo Lee. It seemed Jeong-myeong Cheon could evoke only one type of emotion, which was this perpetual “Hunh? How did I get here?” look stamped on his face. Supporting performance by Hie-sun Park as Deacon Byeon was the only adult performance worthy of praise.

Pil-Sung Yim’s second film “Hansel & Gretel” has some good things going for it: very strong production values, child actors performing wonderfully, and that unique angle of wrapping a children’s storybook like setting around a dark story centered abuse. Unfortunately, the dark subject matter wasn’t shown in a convincing manner and felt more like a cheap trick to disturb the audience. The movie was also burdened by Jeong-myeong Cheon’s starring performance, which was a complete turd of a performance. Initially, “Hansel & Gretel” had a chance to become one of those unique horror / thriller films, on the level of the brilliant “Epitaph,” but by the time end credits roll around the film turns out to be a decent film saddled with a seen-it-before dark story that underwhelms and even feels exploitive at times.