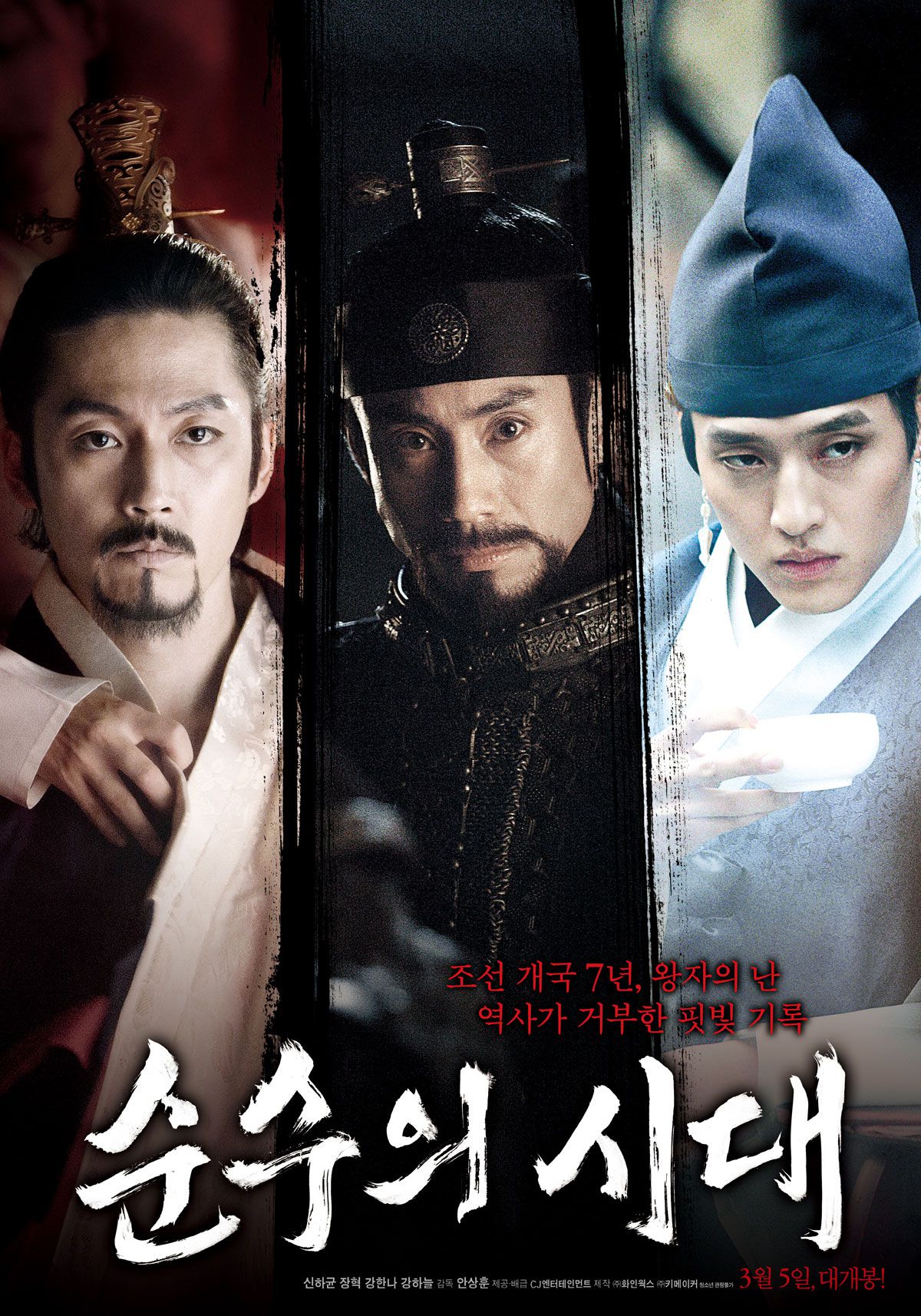 Set in 1398. Kim Min-Jae (Shin Ha-Kyun) is the supreme commander of the Joseon Dynasty. He falls in love for the first time and for that woman he takes risks.

Yi Bang-Won (Jang Hyuk) is the King’s son. He helped his father setup the Joseon Dynasty era, but he was not picked as the Crown Prince. He still holds ambitions of becoming the King one day.

Jin (Kang Ha-Neul) is Kim Min-Jae’s son and the King’s son-in-law. Due to his position as the King's son-in-law, he is unable to take part in politics and only seeks out pleasure. Scarlet Mar 22 2020 9:14 pm I watched it because I needed more of Jang Hyuk as Yi Bang Won after My Country, and he didn't disappoint! I liked his character in drama more, but here as well he was captivating ( and so hard to hate), so if you're here because of him, watch it! Movie itself was interesting - great balance of politics, revenge and love story! Yes, there're some sex scenes, but so what? Lol I'm surprised seeing people critisizing it, as if every second Western movie doesn't have it! :) And actors doesn't lose of their value for doing such scenes - it's part of acting job! Plus movie name, plus tag "mature" is kinda preparing us for this :)

B- if you're here for Kang Haneul's acting range, watch it. He really shows it here.

2. If you're here for Shin Ha Kyun, definitely watch it. He pulled another beautiful love story, an adult rated one.

Jang Hyukie Sep 09 2019 1:54 pm I have watched it because I am a big fan of Jang hyuk, the plot is good but it's a rated movie, if you don't like "those scenes", just skip them and enjoy the movie.

non Jun 30 2019 9:11 pm Great storyline. I think its a bit disappointing because the movie is too short. Need to remake to drama. It will be really great drama I think. Please remakee TTTTT

TeaZombie Dec 31 2018 6:44 pm Yall are bugging. Complaining about a movie called Empire of LUST having a bunch of sex scenes. Its not even that many and takes nothing away from the movie. Anyway, loved it. Would recommend.

Pamela Kay Nov 26 2017 1:59 am You have got to let your good looking men grow up a little. The character that had the most sex scenes was Kim Min-Jae with the woman that he loved dearly. As for your poor sweet innocent Kang Ha Neul you just seen his butt (if it was really his) and some boobs in this movie.. The movie itself was very hard for me to understand since the English subbing was so whacky.. What I understood the most was the love story between Kim Min-Jae and Ka-Hee. So many comments from people who got so bent out of shape over some tastefully done sex scenes is beyond me.

lyn Nov 19 2017 9:34 pm Yes..there are a lot of sex scenes..that's why its name Empire of Lust. I'm not focus on the bed scene...the strength of this movie is lays on actor Jang (he acted with excellent as a prince Yi Bang Won). I already repeat many times watched this movie because of Jang hyuk excellent face expression..you can see he is full of greed and ambitious for this role

lrt Jun 09 2017 12:46 pm This is a beautifully filmed love story that includes revenge jealousy and rivalry. The sex scenes were appropriate and not contrived.....that Shin Ha-Kyun has a body to die for!! I liked it and watched it twice. Tastefully done.

shock Nov 14 2016 9:09 pm i praised the actor who actually did such a challenge character, but i ended with lost interest when they're going to have some explicit sex scenes, it's just like a cheap person that actually come to my mind, how brilliant their acting because it didn't help, so now is korean really copycat a hollywood? i read kang ha neul was so frustrating because he has morality breakdown after doing that, but on top of that i was really shocked there is Kang Ha Na who played Yeon Hwa doing such this scene, i think whatever they done behind the camera in their real life, but i really hate when actors/actresses having sex scene on the screen..

Maria Oct 05 2016 1:08 am Oh my virgins eyes! Too much sex scenes! I can't believe i've watched this movie and I'm traumatized for life! I can no longer see in Kang Ha Neul like a flower boy anymore!

Sarah lee Sep 15 2016 10:35 pm Ok so can anyone tell me if kang ha neul has any graphic sex scene in this movie? I want to maintain his boy next door innocent image in my mind so if he has one, im not gonna watch this. Kthxbye

Rostand63 Jul 10 2015 12:12 pm There is a familiarity to the film. However, there are disturbing scenes of lost innocence (hence the name, I suppose). The initial sex scene, with Jang Hyuk, is a surprising addition spliced with the bloodlust of a battle scene. It represents what is happening in the bed, in my eyes. There is no eye contact, at all. That may be that Hyuk was embarrassed or his acting method revealing that the encounter meant nothing to him emotionally, as the ambitious Prince. Either way, it is interesting. Jang Hyuk never disappoints, that I've found, so far and maintains his daringness and versatility.

There are certainly enough great bodies to appreciate in this movie but try to concentrate on the acting and story.

Other sex scenes, at least, show there is caring and love between the couple. Later, of course, there is stunning photography that makes you, almost, forget the rest.

Predictable story? Maybe. But still worth a watch if you are mature enough to deal with it.

Deeeeee Feb 02 2015 11:10 pm I'm gonna be watching this for Jang Hyuk. He looks smexy in period dramas/movies. While I'm currently loving his sloppy yet intelligent character in Shine or Go crazy, I think this would be a good change-up. He's always so good in everything he does. Hope this movie does really well!