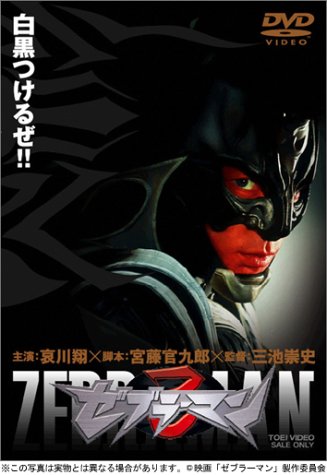 Grade-school teacher Shinichi just can’t get any respect. His wife treats him like a nuisance, his daughter ignores his every word, his coworkers think he’s pitiful. His students regard him as a bore and an imbecile, and mercilessly bully his son, who wants nothing to do with him as a result. The only place Shinichi can find any confidence and self-esteem is alone in his room, where he’s secretly sewn together a costume. It’s a perfect replica of the suit worn by Zebraman, the hero of a third-rate 1970s superhero show that nobody remembers except Shinichi –- and much to his joy, the new, wheelchair-bound student at his school.

At the same time, strange things are occurring throughout the area. The citizens are nervous, and the military has dispatched agents to uncover – or perhaps cover up –- the source of the danger. Shinichi’s urge to sneak out and prowl in his costume, to feel what a hero feels when guarding the night from evil, soon has him dragged into an increasingly bizarre mystery.