When I Kill Myself 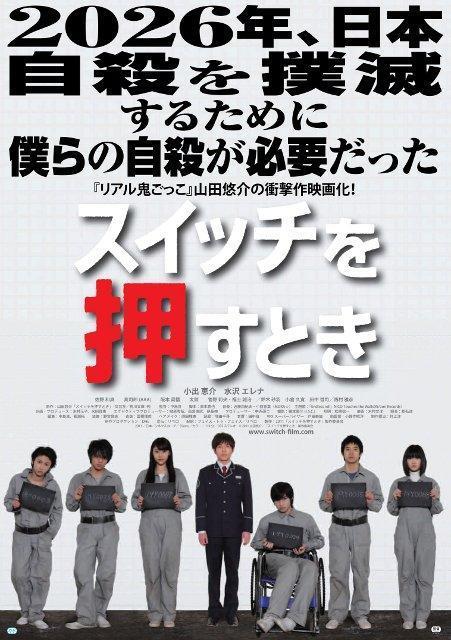 Due to the high suicide rate among youths in Japan, the government implements experiments to uncover the causes behind the high suicide rate. Children are selected and placed in a YSC facility under constant surveillance. At the age of 10, the children are then give a detonator with a red switch. They are told if they press the switch they will die immediately. Most of the children under the experiment, eventually presses the switch and dies.

After the completion of the experiment 6 kids remain who did not press the switch. The 6 kids are; strong-minded Masami, weak Naoto, hot-tempered Hiro, impulsive Ryota, wheelchair bound Kimiaki and Aiko who is always thinking of her parents. These 6 kids survived even though they were pressured by project manager Tsukuda to press the switch.

A new warden Yohei Minami (Keisuke Koide) then begins working at the YSC facility. Warden Yohei approaches the kids with a smile and calls them by their names and not their numbers. The 6 kids are confused by the new warden's humane treatment of them.

Masami feels that something isn't right, but the other kids open up to the new warden. Aiko and Hiro then presses the red switch. Masami and the other kids are shocked and shaken. Warden Yohei tries to cheer up the remaining 4 kids and Masami begins to warm up to him.

Ryoto then discovers a letter which was written by Hiro in the trash can. The letter asked something to Warden Yohei. When Ryota protests in a fierce tone in front of the warden, he just smiles back. Warden Yohei is the man who goes to each of the facilities nationwide and shuts down the facilities one by one. At first, Warden Yohei gives these kids hope and then takes their hope away. That is his strategy. Meanwhile, Warden Yohei has no other choice but to work in this manner. Warden Yohei also knows that more tragedy is coming ...

Virus Mar 12 2013 6:16 am I just finished watching the movie and It's really good! But I dislike the way they filmed it too dark plus bad quality from where I watched it so it was hard to watch...and they skipped lots of parts I was like "Wait what is going on?" at some parts... :/ But It made me really hate those actors in the movie (the ones against the teenagers) \>.</ I give it 5/5 with a saddened heart.

Cecilie Aug 28 2011 1:12 pm What a macabre story, but also highly topical when it comes to the suicide situation in Japan. I would like to watch this movie! :)