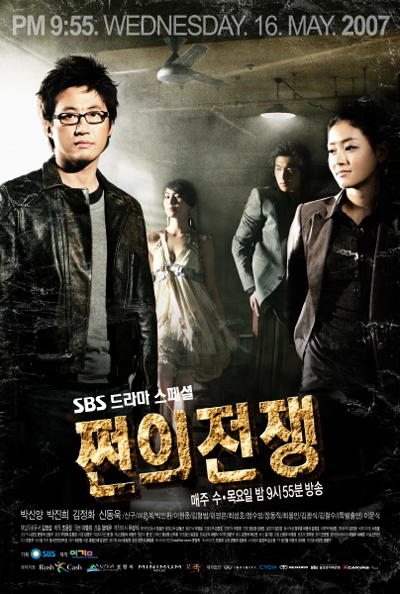 Two years ago, on the wedding day of Keum Eun-ji, who is Keum Na-ra (Park Shin-Yang)’s sister, loan sharks barge into the wedding hall and ruin the wedding, demanding that their father pay back the money he borrowed from them. But the father disappears, and the loan sharks move into the family’s home and demand that they find their father. Na-ra declares personally bankruptcy and gets fired from his job. He tries to borrow money from his friends but none of them offer any help. Na-ra’s mother falls ill after seeing her son suffer from the debt collectors. To earn money for his mother’s surgery, Na-ra goes to see his friend In-hyuk, where he encounters Seo Joo-hee (Park Jin-Hee) for the first time. Instead of lending money to Na-ra, In-hyuk insults him. Finally, Na-ra decides to ask his rich lover Cha-yeon (Kim Jeong-Hwa) for help. Wishing to test his love, Cha-yeon’s grandmother offers him a great amount of money if he agrees to leave her granddaughter. When he chooses the money over her granddaughter, she becomes furious and tips off the debt collectors that Na-ra is carrying money with him. Na-ra’s mother undergoes surgery, but when she learns that her husband committed suicide, she becomes overcome with grief and eventually dies. The furious Na-ra barges into the Buddhist temple that his mother used to pray at and vandalizes the place. Seo Joo-hee’s father and Na-ra’s high school teacher, Seo In-chul, tries to look for his friend who is homeless. By chance, he finds Keum Na-ra on the street. Seo In-chul learns about Na-ra’s family crisis and lets him stay over at his home. Later that night, Na-ra sneaks out of In-chul’s house and encounters Joo-hee again. Na-ra vows to become rich, and learns that Dokgo Chul is the richest loan shark in town. Na-ra decides to learn his secrets on becoming rich. Learning that Ma Dong-po has the most cashflow among loan sharks, Na-ra goes to meet him. Little does he know that Ma Dong-po is the very person who pressures his father to commit suicide. Meanwhile, Seo Joo-hee is insulted by Ma Dong-po, who lent money to her father, and just then, Keum Na-ra’s junior high school friend Kang In-hyuk, who is a rich divorced man, appears and asks her to marry him. Keum Na-ra and Ma Dong-po decide to go into business together. As Ma Dong-po becomes wealthier thanks to Na-ra’s hustling skills as a debt collector, he begins to trust him. Ma Dong-po orders Na-ra to collect the debts that Joo-hee’s father owes him. In her desperation to pay off her father’s debts, Joo-hee decides to marry In-hyuk for his money. However, on the wedding day, when In-hyuk swears that he will not pay back the money that Joo-hee’s father owes, Na-ra ruins the wedding just like how his sister’s wedding was ruined two years ago.

Jude Dec 06 2018 7:42 am Actually what is the connection between eps.16 and the rest episodes?? It's an absurd plot without explanation...

Park Shin Yang was superb in his lead role

Diane Feb 07 2018 1:10 am I've seen many dramas with sloppy, incoherent, or just lame endings, but I've never seen one like this that ruined the whole drama so completely. The ending was inconsistent with the story, illogical in relation to the plot and the characters, and unnecessarily brutal. No wonder they rushed to do 4 bonus episodes to repair the damage.

CharityLoanShark Dec 27 2016 4:06 am You will doubt your tolerance to this world. You may learn about vengeance and trust. If you watched Glass Slippers, you will survive the ending. I like the lead couple a lots and even miss Jo (Her name is Kim Byeong Seon, and she is a flower too!)