Until the Lights Come Back 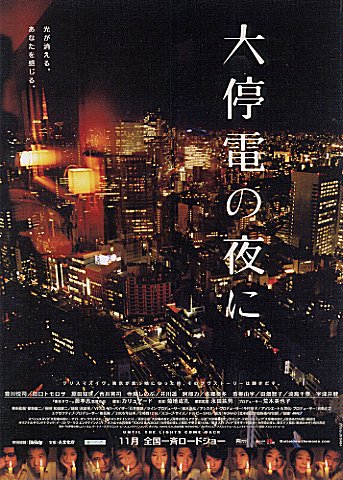 With his telescope fixed on Tokyo's snow-filled skies, 14-year-old Shota (Kanata Hongo), sees a woman, Maiko (Yu Kashii), leap from the roof of a nearby hospital. Fortunately, she simply lands on the next rooftop but, seeing she's obviously distraught, Shota seeks to visit the hospital.

At the same facility, Saeki (Tomorowo Taguchi) is visiting his dying father (Tomoyo Harada). Dad drops a double deathbed bombshell that not only was Saeki the product of an extramarital affair but also his supposedly dead mother is alive and living in Tokyo. Dad makes the confession because he wants to see his true love one more time before he croaks.

Saeki has marital problems of his own: In addition to his wife (Tomoyo Harada) filling out divorce papers, his mistress, Misuzu (Haruka Igawa), won't let go. She arranges to meet Saeki in their regular hotel, where Chinese bellboy Dong-dong (Tsuyoshi Abe) is finishing his shift before catching a latenight flight to Shanghai to see his g.f. for Christmas.

Elsewhere, pregnant Reiko (Shinobu Terajima) is confronted by the return of her former lover, Ginji (Koji Kikkawa), who's just been released from a six-year prison stretch.

Last but not least, lonely bar owner Shinichi (Etsushi Toyogawa) waits in vain for an ex-lover who's married someone else. Shinichi's forlorn manner is observed by the adoring Nozomi (Tomoko Tabata), who manages a candle shop in the same alley.

When a crashing satellite shuts down the Tokyo electrical system, the darkness provides each of these Tokyo-ites an opportunity to reveal their innermost feelings.