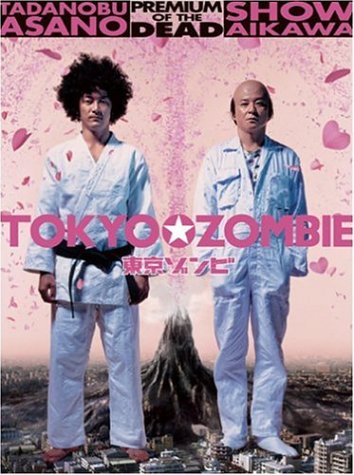 After getting busted for goofing off at work, lovable morons Fujio (Tadanobu Asano) and Mitsuo (Sho Aikawa) are forced to murder their high-strung boss Ujimoto, whose abusive nature is threatening his wimpy employees' well-being. Like everyone else in Tokyo with a body to stash, they take his rotting corpse to Black Fuji, a mountainous black mound of garbage the people of this sprawling city use to dispose of their undesirables. Though some use it to ditch unwanted household appliances and dirty magazines, most use it to hide the bodies the recently deceased.

Unfortunately, the toxic combination of solid waste and human flesh has reached its boiling point, causing the dead to rise from their shallow graves. It doesn't take long for these Tokyo zombies to infest the country, sending our bumbling buddies on a road trip to Russia. Why Russia, you ask? Because Russia is manly, of course! Their extended holiday is abruptly interrupted by a band of flesh-eating shuffle-butts, and the duo soon find themselves in a gated community run by the rich and powered by the poor, where zombie tournament fights are held to alleviate the stress of these money-hungry moguls.