The Way of the Househusband 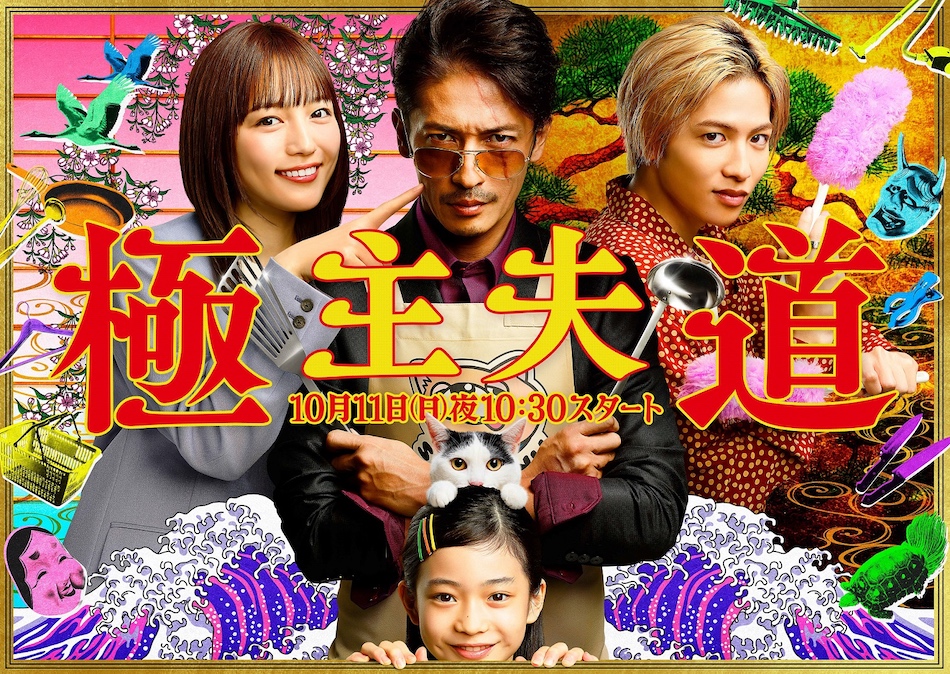 Tatsu (Hiroshi Tamaki) is 38 years old. He was once a legendary yakuza and was known as "Immortal Dragon" because he was so feared. He quit the yakuza and married Miku. Tatsu then became a househusband. He buries himself in housework.

chuu Mar 04 2021 12:05 am People complaining about the actress's age in the comments. She's in her 20's. What do you want? Not everything has to involve 30 year olds. There's enough shows about that. It's not like she's a child. Besides, have some of you even read the manga? Probably not since you're all complaining so much.

Alvina Dec 26 2020 8:16 pm loved it. It kept true to the spirit of the manga while filling in the details to make a proper live action. Very nice and easy to watch.

Jay Quintana Dec 23 2020 7:36 pm This show is silly, over-the-top, and too reliant on coincidences, and yet, I love it. Sometimes you just want fun, not works of art.

cloud Dec 15 2020 7:39 pm @NimRod I'm wholly sure the person creating this series is familiar with the manga as a whole. I'm also sure the person creating this realizes that the manga basically being nothing but one-offs knows that it wouldn't make for a good live action comedy-drama. As someone who has fully finished it, I can say (having read all current manga chapters) that it is really good. It is NOT the manga at all. It is the manga in spirit of the characters, but story-wise, it is derived from the manga. There are big changes, but they are made so this works as a story-based format. Do not look at this as a manga copy, but as its own work based on the manga. It is well made and the characters are very well cast. Do give it a shot, I promise that you won't be disappointed. (Note that the daughter addition is very lackluster in the first couple episodes but really pans out well in the latter half of the season)

adlock Nov 15 2020 3:26 am the person who suggested Ueno Juri has the biggest brain in this whole thread!!!!!!!!!!!! we could have had the grown up nodame reunion we deserved!!!! but japan is so hung up on huge age gaps ugh the quality of their shows are suffering because of this

Suo Oct 28 2020 1:12 pm So far as I know, Miku's age has never been explicitly said (Tatsu's as well for that matter) or even hinted at in the manga. If it was, kindly tell me which volume it was in.

If this turns out to be underwhelming, at least there's an anime coming out in 2021 on Netflix.

NimRod Oct 13 2020 4:50 am An okay rough start. It seems the director only has a passing knowledge of the characters, none of them are really the same characters from the manga.. Histories have been changes, characters act differently, added characters don't add much.

I'll watch the whole thing, but if you were a fan of the manga, i dont expect you'd be happy with what you are getting after all the hype.

filled with weird and jarring camera shaking and slow-mo which feels like visual vomit rather than adding anything to the scene itself. I doubt I'd give this higher than a 5 out of 10.

Which is a shame, since I loved the director's previous work on Ossan'zu Love, but after seeing this. I have to wonder how much was changed from the manga.

JohnDoe Oct 13 2020 4:44 am People complaining about the actress' age, makes me wonder if they've even read the manga.

Kinda have to agree that Haruna is on the younger side, specially since they're supposed to have a daughter in the series, who looks like she's about 8.

Niahana Sep 24 2020 12:49 am Jessi...exactly! I love this manga but really frustrated with Miku actress. They dont have chemistry at all! its like looking at The Way of The Housefather instead. whats wrong with Japan lately. They love to pair with older man and young woman or vice versa *facepalm*.

I can recommend someone like Machiko Ono, Nana Eikura or why not UENO JURI. Goshhh..much, much better.