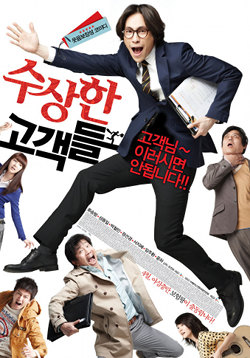 Bae Byung-Woo (Ryoo Seung-Bum) is a former professional baseball player and now a top insurance salesman for Jeil Life Insurance. He is even on the radar of a company that manages property for the top 1% in the upper class. But, one day, a client of Byung-Woo commits suicide. Furthermore, he is investigated by the police for aiding and abetting his client's suicide. Jeil Life Insurance starts to audit Byung-Woo's past clients.

Byung-Woo thinks back to some of his clients who have a high probability for committing suicide. If another client of his commits suicide his career is effectively over. Byung-Woo now attempts to reach out to his past clients. There's dept. head Oh (Park Chul-Min), who works alone in Korea while his family is overseas. So-Yeon works as a lounge singer, while watching over her younger brother. She is constantly hounded by loan sharks for unpaid debts left by her absent father. Homeless young man Young-Tak (Lim Ju-Hwan) suffers from tic disorders. Single mother Bok-Soon works as a garbage collector, while taking care of her four children.

At first, Byung-Woo attempts to persuade his clients to change their plans from life insurance to pension plans. As he gets to know them more, Byung-Woo becomes involved in their difficult daily lives and, consequently, starts to change his own outlook on life.

Akira Miyashi Jan 20 2012 3:16 am This is a good movie, especially for those who has thoughts of suicide on their mind. Of course, with a tinge of comedy, what can go wrong? :D