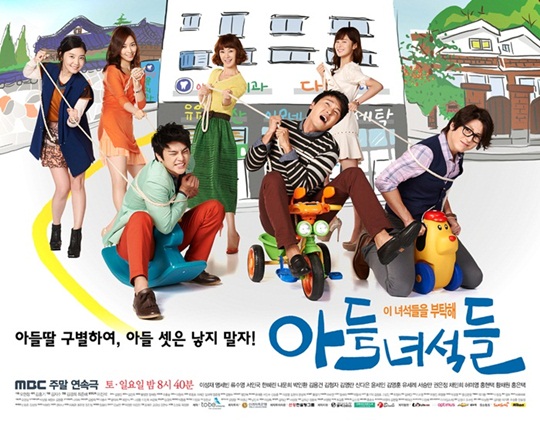 "Rascal Sons" is centered around a family and their three sons with different personalities.

Jung-Sook (Na Moon-Hee) asks her husband Won-Tae (Park In-Hwan) for a divorce and prepares to go to Japan to see her daughter. Won-Tae seems unhappy outwardly, but, he is actually happy because he met someone online with the username "Pear Blossoms" and dreams of having a romance with the woman.

Meanwhile, their eldest son Hyun-Gi (Lee Sung-Jae) drives his daughter to school on her school's picnic day. They are running late. In addition, In-Ok (Myung Se-Bin) takes her son to the same school. They meet for the first time during the picnic day. Middle son Min-Gi (Ryu Soo-Young) goes to the airport to pick up Shin-Young (Han Hye-Rin), who is returning to Korea after studying abroad. Min-Gi secretly loves Shin-Young, who is the girlfriend of his friend. Youngest son Seung-Gi (Seo In-Guk) is married, but he continuously has affairs. One day, Seung-Gi lies to his wife Mi-Rim (Yoon Se-In) and goes to see another woman. Mi-Rim becomes suspicious about his behavior. 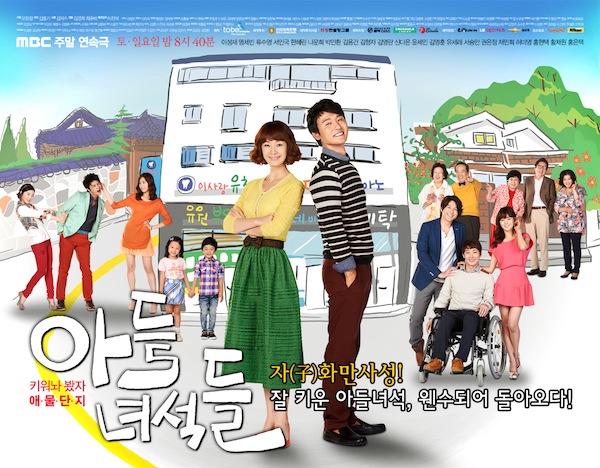 Lerma Mar 25 2020 8:23 am Rascal Sons is one of the best Kdrama that I've ever watched, SEO INGUK was sooo amazing, i cried a lot for episodes 49 and 50... SIG is very versatile, he can handle and did it well in every role he portrayed, great actor and singer as well... Total package... He deserve much more... New Drama, Movie, Variety Show for him please.....

saranghae May 14 2019 8:01 am finished last epi 50 i only watched the main ship the widowers love story including the parts with their families and the 2 cuties little kids arama and tabina i have no idea of what happened to the other ships cuz i skipped all of it in all i probably watched about 20 epi or so my ratings 6 out of 10 for the main story im wondering if tthis drama was cut short cuz of the poor tv ratings

saranghae Mar 29 2019 6:34 am just started this drama finished epi 2 i like it and looks very promising as in any drama other than the main story there lots of other ships good and bad all kinds the only one that i dont like is the youngest son ship its too childish and stupid so i will skip all of it i guess this is geared up for younger people definitely not for me other thing that bothers me are the tv ratings they are just awfully too low that made me hesitate quite a bit but ill give it try i had many cases where i started dramas with lots of 1st ratings but ended up dumping them with vengeance along the way

Susan Mar 14 2018 7:42 pm I hate to watch Jin Yoo Ri's characters... Very annoying... She tried to look cute but it's very disgusting since for face that already looks old and not cute, don't try to act like an innocent character.

nica Nov 06 2016 1:53 am watching this back for seo in guk.. he is so cute and funny.. totally different from his real manly and charming personality.. love him

alecx Aug 27 2015 8:04 am I watch this because of Seo In Guk, very handsome oppa, please do not lose too much weight. Hope to see more from you.

ingukssi lover Oct 23 2014 11:09 am i watch this drama just to see ingukssi oppa face, i ship every scene of him when seunggissi appa is with adeul boram. they are perfect match in heaven as appa and adeul. it seems that ingukssi oppa love kiddos very much, so rare to find a namja with that personality.. love you oppa,, saranghaeyo.. and when you have your real kids, be sure to be the best appa ..

Bawk Jun 28 2013 6:45 pm I had high expectations for this drama because the first episode hooked me in right away. The first few episodes were pretty good but then the story line slowly kept going off track... I think this drama would also be better if they cut off like 20 episodes because a lot of episodes felt like they didn't contribute to the plot and were like "reruns". My fave couple was Jin and ShinYong... they probably had the most well developed story line in my opinnion. I wish they had like a "one year later" kind of thing. (The last couple episodes of the drama felt really rushed and also felt like they threw random crap in the end) The drama is not bad but I agree with the person who said it was a yawner... You will probably get bored of it because the setting is pretty small and like I said, many of the episodes feel repeated and they should have just continued with the story line and ended things faster so that they could focus on other parts of the story.(P.S. my english is not that good)

James Jun 09 2013 1:04 pm I know that long term shows change the story line when they have low ratings and this show was a bit of a yawner, but still, the focus suddenly (SPOILERS) becomes Inok turning into a big old ho, having to deal with not one but two ultimate alpha monster shrew crazy mothers in law, not one but two ultimate mama's boys and the scorn and hatred of just about everyone else and dealing with it like a limp, sorrowful dishrag, except in a few instances where she tries to challenge her tormentors which of course will end badly for her. Seriously? Were the producers that desperate just to squeeze out a few ratings points?